In honor of the tenth anniversary of Let Inga Tell You, and having run out of pretty much anything else to say (not that this will stop me from writing the column), I have been mining my memories of Pleasantville High School Class of ’65 and our subsequent reunions in my last two columns.  Try to contain your excitement.  In order to get people to read past the first paragraph, I’ve been intentionally inserting the name of my Pulitzer-prize-winning classmate, Dave Barry.

While my husband, Olof, had accompanied me back east for my 50th reunion, he had elected to forego the reunion itself and decided that it would be an upper instead to tour the battlefields in Gettysburg. Fortunately for me, the huge storm that was about to hit the Northeast held off long enough for my tiny toy plane to fly into the Westchester County Airport. Olof observed later that the Gettysburg battlefields probably show better when not under water.

Anyway, he should go back and look at the girls’ yearbook photos.  We all look like we’re wearing helmets, which essentially we are, lacquered into submission by prodigious quantities of AquaNet. A flip at the bottom was a common variation. The main requirement was that your hair moved in solidarity with your head. Actually, I could really have used that look (and the AquaNet) at the 40th reunion during Tropical Storm Tammy.  Is it coincidental that our reunions always seem to be accompanied by Category 3 weather events?

While PHS’s standard Friday night reunion event had always been a pizza party at the American Legion Hall, at the 50th, the reunion committee opted instead for an exciting upgrade which was walking in the high school’s graduation ceremonies ahead of the graduates followed by dinner at the school cafeteria. When I heard that my classmates had voted for this event, I could only wonder: Were they all on food stamps? Further, I thought this was a rotten thing to do to the new graduates: like, if they work hard their whole lives and don't die of cancer, WE'RE what they have to look forward to?  Third, I avoided that cafeteria like the plague in high school so flying across the country to eat there wasn’t really high on my list. As it was later disclosed, the vote for the graduation/cafeteria event was 12-10, the other 150 classmates having failed to vote one way or the other.

Fortunately, the Saturday night event stayed with tradition: a dinner dance at the Pleasantville County Club which, due to Pleasantville’s draconian zoning, is still pretty much the only game in town.  Seriously, you can come back to Pleasantville, New York 50 years later and it hasn’t changed. Our Famous Classmate, Dave Barry, came to the Saturday night event with his wife and their 15-year-old daughter who bore up bravely but could be seen tapping away on her phone. I would have killed to see the hashtags: #geezerfest  #worstnightofmylife  #sincewhenisthismusic  #Illneverbebadagain #oyveyYMCA?

Since we were all 67-68 at the 50th reunion, there was, not surprisingly, a lot of health and diet talk. One of my classmates appeared to have been dropped into a vat of new age elixir: everything was “meant to be,” all choices were OK. But what was truly lovely was how unfiltered conversations were. Maybe it’s because we’ve finally dropped all the pretenses. Or maybe we’re borderline senile. Regardless, the dialog was all refreshingly honest. Then again, maybe in high school you don’t want conversations to be that honest.

As with the 40th, I got the award for coming the farthest although not before a challenge by somebody from Washington state was settled by MapQuest on our iPhones.

Emails have been coming in recently about proposed dates for the 55th next year..  We’ll all be 72.  Well, those of us who aren’t dead. And that was one of the sobering things about the 50th: about a third of the class had died.  And that was just the ones we knew about. About ten minutes into a somber memorial reading of the list, I thought, “We’re only on ‘G’?”

So who knows whether we’ll even be able to muster a quorum.  Is the Pleasantville Country Club wheelchair accessible? Alas, I doubt I’ll make the 55th.  It’s a long way to go.  I’ve also got YMCA on my iPhone playlist so I can hear it whenever I want. 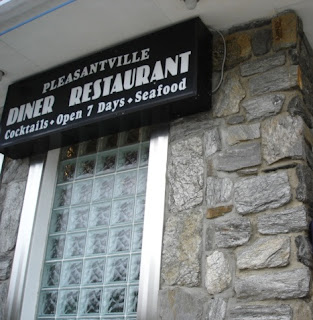 50 years later, the Pleasantville Diner has a new
facade but pretty much the same menu
Posted by Inga at 9:35 AM