Not long ago, I'm in line at the supermarket behind a somewhat chubby young woman holding an adorable Pug puppy. Her groceries are already bagged but it quickly becomes obvious that her debit card is being declined. Cash or credit card are not forthcoming in its place. She keeps taking things out of the bags – Ore-Ida frozen hash browns, Betty Crocker biscuit mix – and asking the clerk to try it again. The clerk is apologetic: “I’m sorry,” she says, “it’s still ‘insufficient funds’”.

The young woman looks increasingly stressed as the line behind her grows. After four rounds of this, I know it won’t matter how much stuff she takes out of those bags or how often the checker re-tries it; this young woman doesn’t have any money. I’m guessing there is probably dog food in there for the puppy. And maybe – given the hash browns and the biscuit mix – a not very nutritious but at least marginally sustaining dinner for her as well.

These are hard economic times. The holidays are coming. Helping one another out is the least we can do.

Meanwhile the puppy – a born closer - turns and looks at me with its big doe-y brown eyes.

I whisper to the checker: “How much is it?” She whispers back, “$11.73”. I think, “How often do I have an opportunity to really help someone for $11.73?” I tell the checker I’ll pay for it. I slide my card and type in my pin while the young woman stands by. I get a kind of terse, “um, thanks” as she grabs her two bags and departs with the dog.

I go out to my car with that warm fuzzy feeling that you get when you’ve made someone’s life just a little brighter, even if only for a day. I imagine them eating their modest meal together that evening. I know I will feel more grateful tonight for my own dinner thinking of her.

And then I glance down at the receipt for the Pug owner’s groceries that the clerk had handed to me along with my own:

I wasn’t sure what the HE miniatures were. Hoping against hope that this could be something at least minimally nutritious for either human or canine - tiny crackers? little kibbly bits? - I went back into the store and showed the receipt to the checker.

“Please tell me this item is real food,” I said.

“Sorry” she said, “that was a bag of Hershey’s miniature chocolate bars.”

OK, I confess I was a little disheartened. Still, as I drove home, I tried to keep sight of the essential issue here: I sure hope dogs like Oreos. 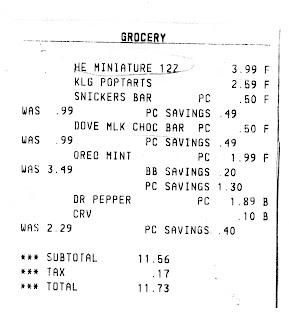 Of all the fantasies one has as a new mom, one never imagines that some day that adorable blob will be a social work graduate student assigned to write a paper analyzing the psychopathology of someone he knows well. And choose you.

Let me just say up front that we couldn’t have been prouder of our older son, Rory, when he decided to get his Masters in Social Work and graduate from his somewhat limited career opportunities in Food Stamps and MediCal Eligibility. The pay was not great and most of the time, Rory wasn’t too far removed from being on food stamps himself.

The call from our scholar started out innocently enough.

“Hi, Mom,” said Rory. “I was wondering if you might help me out with a paper I have to write for Human Behavior in the Social Environment. I have to analyze another person according to three different theories of psychodynamics.”

“Sounds really interesting,” I said. “So you want me to proofread it?”

“Um, not exactly.” A tentative pause. “I was kind of planning on you being the person.”

I would like to say that Rory was not the easiest child. (His version is that I was not the easiest mother.) I’ve heard it said that you have the most trouble with the child most like you. Rory and I are both intense, highly emotional people. He even looks like me. All of which is fairly amazing since he’s adopted. But he had an exquisite sense about what would push my buttons and pretty much had them on speed dial.

I’m embarrassed to say how often Rory and I got into huge screaming matches. (Olof said more than once that we should BOTH go to our rooms.) Meanwhile, my younger son, mild mannered Clark Kent, my biological child, would shake his head and wander off muttering, “Why am I related to these people?”

The normally placid Olof was distraught when he heard Rory’s plan. He pleaded with me: Against all odds Rory survived to adulthood without any felonies being committed on either side. Why, WHY would I risk it all now?

But Rory persisted. As a student of behavior, it was an opportunity for him to learn more about the factors that influenced my formative years. And to help him understand why I was potentially the worst mother in the history of the world.

Olof finally relented, knowing the cause was lost, but insisted, “But you can’t read it, Inga. Promise me.”

Shortly thereafter, a long list of questions arrived, and numerous email and telephone conversations ensued. The great and small triumphs and tragedies of my life were reviewed. And in the end, I ignored Olof’s express wishes and read the final product: Seventeen typed pages on the psychodynamics of Mom.

And I have to say, it was a strikingly sympathetic portrait. I really came out of this okay. Even Rory said he had an entirely different view of me after he finished it than when he started.

“A for the paper,” he replied.

But an all-too-familiar I-just-can’t-help myself smile suddenly appeared.

A Case for Courtesy

This piece appeared in The Foghorn, the newsletter of the San Diego Press Club.

The Case for Courtesy


I used to lament to friends that I could wallpaper my home in rejections slips.


Come back, rejection slips.  All is forgiven.


Now, of course, I just want a reply, any sign from the ether that my submission was indeed considered even if it doesn’t meet their present needs.


Some publications avoid the reply issue by saying that if you haven’t heard in X days, they’re not interested.  They’ll insist all submissions are read.   Not that we believe that for a nanosecond.


We who write fear in our hearts that at the other end of the Send button is a minimum wage recent journalism school graduate who spends his or her latte-fueled day on Facebook and hits Select All and Delete on the submission in-basket on a pretty much hourly basis.


The guest column I submitted per the guidelines to Editor & Publisher went ignored until a writer friend gave me the private email of an editor there who bought it within an hour.  Ditto a piece for San Diego Magazine.


A timely humor piece went to our local daily last year that I felt was perfect for them.  I submitted it weekly for eight weeks, including follow-ups to the editor who was supposed to get it, and resubmissions to editors who weren’t.  Not a word.  On the eighth week, I got a call from None of the Above saying he’d just received my wonderfully timely very funny piece and was running it that weekend.

“Just out of curiosity,” I said, “do you remember seeing this piece before?”


I really try to target my work to specific publications.  So I wouldn’t mind my piece being rejected (oh, all right, yes I would) if a sentient editorial human really thought it wasn’t right for them.


My technogeek husband maintains that the excuse about their being so swamped with submissions as to be unable to reply individually is nonsense.  For the same amount of energy our entry-level ennuied Instant Messager expends hitting Delete before heading for the Mojitos, he could be hitting Control N, as in No, and sending an automated message of regret.  It would at least give the illusion of courtesy.


Fortunately, I now have a column in the La Jolla Light which has largely removed me from marketing.  It’s a sure sell every time, well, except maybe for my April 8 column called “I was a mistress of both Tiger AND Jesse” which was deemed unsuitable for a family newspaper although I swear it was totally G-rated.  (In retrospect, it was probably a mistake to submit it Easter week when there was a lot of coverage of chicks and bunnies.)


But the freelance work and my book project are uphill.  My completed book manuscript sits ready for adulation while queries to prospective agents go unanswered or at best get a snooty “We only deal with authors who have published at least ten best sellers even though you’ve never heard of a single title on our list.”  Last time I published a book, in aught five the year of the big snow, it really wasn’t hard to get an agent.  Now I think you need an agent to get an agent.


I don’t think any of my fellow writers would argue that we deserve better.  But above all, we deserve an answer.
Posted by Inga at 12:48 PM 1 comment: