Ghosts Of Christmas Trees Past

My first husband always insisted we get a small live tree which we would then plant in the yard in what he considered a charming post-Christmas tradition. Folks: do NOT try this at home!  Little did we realize how much those suckers would grow - one to 40 feet! By the time my husband and I divorced ten years (and Christmas trees) later, anyone driving by would think our place was a tree farm with a driveway.  Meanwhile, the interior of the house descended into a barn-esque gloom since the tree tops had created a rain forest canopy effect. The tree roots made for constant plumbing problems and grass wouldn’t grow under pine needles. Ultimately, it cost me $4,000 to have ten originally-$20 trees removed from the property.  (I knew I should have had a Christmas tree removal reimbursement clause in the divorce decree!)

Now single with two little kids, I went for the six-foot Douglas fir simply because they were the cheapest. I’d be on my stomach trying to screw the trunk into the stand while six-year-old Rory was holding up the tree. Three-year-old Henry was supposed to tell me when it was straight.  I crawled out from under the tree to discover that it was listing 45 degrees. Irrefutably demonstrating the principle of gravitational vector forces, it promptly fell over.

It was several more years at least until we had a Christmas tree that wasn’t leaning precariously. In a brilliant Single Mom Home Repair School solution, I tied a rope midway up the trunk and tethered the other end to a ceiling plant hook.  Miraculously (since I guarantee that butterfly bolts are not rated for Christmas tree stabilization), it stayed vertical.

Some years later, Henry, who was about 11 at the time, and I brought home a bargain supermarket tree. Our tree, alas, had lots of branches right at the base of the trunk which we were attempting to amputate with a rusty jigsaw (left over from Pinewood Derby days) - in the dark in the front yard via flashlight - so that we could get the trunk into the stand.  What’s amazing is that we didn’t sever any digits in the process. I finally ended up calling a neighbor who came over with the appropriate tools and did the job for us. Decision for next year: better saw, or a tree from a Christmas tree lot.

Since I wasn’t all that interested in replicating the experience even with good tools, the next year I did indeed go to a tree lot and got full service branch trimming. The tree lot guys mentioned that they could probably get the tree on top of my little Toyota if I wanted to save the delivery fee. (I think they sensed a cheap tipper.)  I was dubious but they did indeed get the tree tied securely on top of the car by having me open the two front windows and running the rope through the car and around the tree, knotting it on top.

Off I went in the early evening darkness driving as slowly as possible through back streets.  I was terrified that a sudden stop would put this tree on the hood of my car, or worse, through the windshield of the car behind me. With enormous relief, I pulled up in front of my darkened house. It was the kids’ night at their dad’s, and Olof was not yet living in San Diego. My plan was to untie the tree, drag it onto the front porch and have the kids help me set it up the following night.

Obviously over-focused on saving the delivery fee and failing to engage even a single synapse, I had not stopped to realize that with the rope threaded through the car windows, the doors couldn’t open. I was trapped in my car. It was well before cell phones. I sat in my car thinking, “Geesh, Inga, it’s amazing you’re allowed to leave the house without a conservator.”  (And also: Would it have killed those tree guys to ask if there would be anybody at home???)

I sat there shivering in my open-windowed car and pondering my options. I didn’t really want to have to go all the way back to the tree lot. But it would probably take all evening to cut through the rope with my car keys. (Note to self: Keep 9-inch Bowie knife in the glove compartment!)

As luck would have it, a neighbor arrived home from work shortly after, and, graciously avoiding voicing what must surely have been his assessment of the situation, extricated me from the car. Why all of my neighbors were not hiding from me after the first year I was single is still a mystery.

But ultimately, I married Olof and we could afford to have not only the Noble fir I had always coveted but have the nice Christmas tree lot people deliver it and set it up to my satisfaction. Personally, I think I’ve earned it. 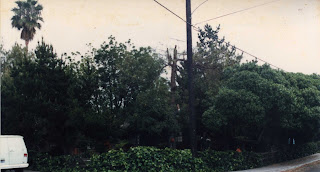 No, this is not a tree farm.  My house is in there.

I may be the alleged writer in the family but many people don’t know that the real talent in the family is Olof.  Despite being a nuclear-physics-trained engineer, Olof has always been a fabulous letter writer.  It was, in fact, how we kept in touch for 23 years from the time we spent our senior year in high school in Brazil as exchange students (how we met) until serendipity (and both of our divorces) brought us back together decades later.

One of my regrets is that I don’t still have any of his letters to me during those two-plus decades.  Of course, we were either writing by hand on lined paper or right off the typewriter, unedited.  Both of us liked to find the humor in mundane – and often not funny at the time - things that were happening in our lives that day …my first husband’s and my attempt to save $125 by acid washing our pool ourselves, for example. Olof regularly regaled me with Air Force moments gone awry. My column is basically letters to a wider audience.

But in the 31 years we’ve been together since our divorces, I fortunately saved favorite documents of his creation, including all the contracts he had for Nintendo game loans (at interest!) with my younger son, Henry.  (Neither my ex nor I thought Henry was a good credit risk.)  Henry, even at eight, was clear that this money would be paid  back, and his allowance never had to be garnished a single time. Not surprisingly, Henry wrote his essay for MBA programs on learning business ethics from Olof.

Over the years, I’ve jotted down favorite Olof-isms.  On being asked on Thursday mornings if he was likely to be working that weekend, he’d reply, “Probably.  Thursday is Crisis Discovery day.” When he returned home after a brutal 20-hour day, I offered sympathy.  He nodded, as he headed for the bedroom.  “Yup, I’ve been ridden hard.  And put away wet.”  After rescuing a project threatening to implode, he’d note, “I think we got the shiny side back up.”

On his aggregate of four years in Saudi Arabia, the ever-optimistic Olof opined: “It’s only a desert if you think of it that way.  I prefer to think of it as a very large beach, with surf breaking on both sides."

When asked how he was able to successfully fix an item that had been considered irretrievably broken, he is likely to smile and reply, "cunning and guile,” “I messed with it,” or “just a mindless application of force.”

Always asked for technical support from family and friends, he often can’t help adding commentary. Explaining a new mouse to my sister some years ago, he wrote; “This is an optical, versus mechanical, mouse. Optical mice have no balls.  Comparisons to the Democratic leadership in Congress are gratuitous.”

Describing something as really inconsequential, he will reference the testicular attributes of rodents: “It’s mouse nuts when you look at it.”

He has been in my kids’ lives since they were six and eight (we married when they were 15 and 17), and have had a profound influence on their education.  In a discussion I was having with the kids back in 1987 about what constitutes “manners,” Olof clarified, “anything you do that feels natural is unmannerly.” This they understood.

On another occasion, commenting on both on my housekeeping skills AND the kids’ assessment that they’d grown up “poor,” he opined: “You didn’t grow up in poverty. But you did grow up in squalor.

After one of our three beloved goldfish - Lucky, Ducky, or Tucky had just died (hopefully not Lucky)  I was trying to decide what might be an appropriate funeral service for it.  After three days with a dead gold fish in the refrigerator, Olof finally took matters into his own hands. I heard the toilet flushing in the hall way bathroom.  Olof came out and solemnly announced, “It was a burial at sea.”

He’s now adored by the five grandchildren whom he affectionately refers to alternately as “the plague carriers” and also “the destroyers of peace.” In play with our grandsons who have named themselves after various superheroes, Olof has dubbed himself Hummingbird Man.

From time to time I get to see his messages in cards we send to the kids.  On Henry’s 38th birthday this year, Olof noted: “Henry – It’s not hard to get older.  It’s getting wiser that’s hard. With three kids, a busy wife and a demanding job, you’ve gotten lots of opportunities.  Enjoy them.  Love, Olof”.

Responding to “Bastille Day birthday wishes” on his July 14 birthday, he noted: “Thanks for the good wishes.  So far my barricades have withstood the assault of time better than those of Louis XVI. But time is the great equalizer.”

So thanks, Olof. You are truly this household’s ray of sunshine.  And fortunately you don’t want to write a column of your own. 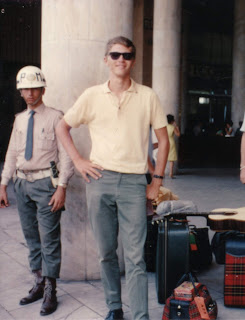 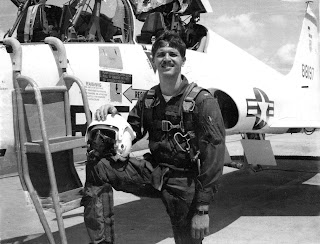 Olof and I corresponded frequently during his
Air Force days