The Security of Cameras 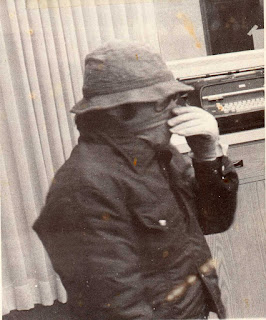 The downside of living in the same house for 43 years is that you don’t always get around to cleaning out the filing cabinets in a timely manner. And that’s how I recently, in a fit of organizational zeal, came across this souvenir photo given to me by the FBI from State Mutual Saving’s security cameras.  It shows the miscreant who pointed a 45-calibre blue steel automatic at me and the teller from a distance of two feet in the course of robbing the bank during the first week of April in 1978.  (Please note IBM Selectric in background for teller to type in entries to your savings passbook.)
Thirty-eight years have passed, and no, NRA, you aren’t getting any donations from me. I never want to be that close to the business end of a gun again.

Actually, the FBI agent gave me the photo so that I could call them in case I ever saw the man again; he was thought to live in the area.  I sincerely doubted the robber wore this disguise around on a routine basis. Still, it would have been dismaying to find myself browsing best sellers at Warwick’s, suddenly recognize the floppy hat and fake sideburns, and realize “Oh s—t! That’s him!”  But I’d been the only customer in the bank at the time and none of the employees lived in La Jolla so I was their best candidate.

This security camera photo is actually an (excessively long) lead-in to the security cameras that my husband Olof and I just had installed. There’s just a few too many car thefts and car vandalisms in our neighborhood these days. The folks across the street had their car rolled out of the driveway in the middle of the night. But now, we’d be able to watch them do it on video!
Plenty of people have told us that security cameras rarely result in anyone being arrested or convicted of a crime. But as I’ve written about before, we’ve had our front fence taken out three times, the second and third times by hit-and-run drivers.  (The 86-year-old lady in the ‘49 Dodge who did the first one may have tried to make a break for it but I was faster.) On another occasion, some reprobates seriously vandalized 50 cars on our street, including ours. So even if the police weren’t interested in making them accountable, I could see myself getting in touch with my inner vigilante and sending my cousin Guido over to chat with them about it.

The folks who installed our video cameras told us that pretty much everyone who installs them has at least two motives. One is, of course, security.  The other, the installer said, is not infrequently related to dog poop. Seriously. People want to know once and for all whose dog is inflicting feculent ordure on their lawn. Dare to deny it now, scumbag neighbor!
Other clients, particularly those who work away from home, apparently want to know how long the gardener was really there and more to the point, was he actually gardening or talking on his cell phone?  Did the pool guy just throw some chemicals in and leave?  What time did the cleaning lady actually get there?

For us, I have to confess that our alternate motive was the postman. We always end up on a postal route that none of the regular carriers ever bid for and hence have had a long series of frequently-well-meaning but generally inept subs who manage not to deliver mail for days at a time. Technically, we’re a “managed service point” such that carriers are required to come up to our house every day and scan a bar code proving they were there. Not that we have any way of finding out if they actually did. But now we know for sure.
A friend who has outdoor security cameras warned me that they are so much fun, I might end up cancelling cable. And I confess she’s right. When I’m sitting at Rubio’s waiting for my daily fish taco fix, I pull out my phone (on which I can see my cameras) to see what’s happening at home. Frankly, usually not much. Sometimes somebody is putting a bag of dog poop in our trash.  (Used to annoy me but I’m over it.) I watch the neighbors unloading their groceries, and people blasting through the stop sign in front of our house without even slowing down.  (SDPD: we could work a deal here.)  Now that we’re official crazy paranoid spy people with security cameras, I cruise through the replay of the night before to see if there was any action, almost perversely wanting some. Meanwhile, who knows if the creepy bank robber guy still lives here? Cold case aficionados: this is your chance.
﻿

The loss of both Jonathan’s and the Haggen-Albertsons supermarkets couldn’t have been more clearly felt than during Christmas week. There was no good will among men. No parking either.

I had hoped to do my last Christmas food shopping on the Tuesday before Christmas. But as soon as I pulled into the La Jolla Vons lot from Fay, I found myself trapped in a hopeless gridlock. I honestly thought it was possible that I could spend the day there, ultimately abandoning my car and taking the bus home. It took me more than an hour just to get myself out the other side of the lot, having never actually bought any groceries.

It’s not, of course, like we don’t have other options. Trader Joe’s has loads of fun stuff, so long as you don’t mind having exactly two choices of fish pre-packaged in sizes you don’t want, and are OK with buying a whole bag of carrots when you need just one. Want a deli sandwich? Not happening. Go on a Sunday afternoon? Lines are literally all the way to the back of the store.

At the small Sprouts store, you can get that deli sandwich (or for me, fresh sliced cold cuts) if you’ve got a half hour to wait for it. Every day seems to be somebody’s first day. Need paper or cleaning products? Not there. Looking for a specific brand name? Nope!

The Vons in Pacific Beach is a blessedly full service store but their parking situation is only one sigma better than downtown La Jolla because of all the other businesses in that mall that it services.

Now, I fully admit that this is a first world problem. But this will not keep me from whining about it anyway. Is it too much to ask for a perfect grocery shopping experience that includes everything I could want in one stop with convenient parking?  I think not.

In my 43 years here, I’ve frequented all the local markets in their various incarnations but my go-to store was usually Albertsons. Though smaller than Vons, it made getting in and out of there that much faster, and I liked the shorter lines and easy angled parking.  I always felt like I was taking my life in my hands in the La Jolla Vons parking lot where the local Beemerati drive like it’s a speedway that is coincidentally contiguous to a supermarket.

Without Jonathan’s and Albertsons, Vons perpetually feels like a mall on Christmas Eve. Too many cars, too few spaces. Too many of us oldies trying to navigate (badly) out of perpendicular parking spots.

In January 2015, the Washington State-based Haggen chain acquired some 83 Albertsons stores in Southern California, including the one in La Jolla. Alas, it all went sour pretty quickly. While the layout was more spacious-looking, the prices were significantly higher. When my backyard lemon tree couldn’t keep up with demand, I couldn’t bring myself to pay $.99 for lemons when they’re $.33 each at Trader Joe’s (never mind stealable in the middle of the night from my neighbor’s back yard). I mean, this is lemon country, folks.  One could only assume they were growing them in hot houses at their Pacific Northwest headquarters.

Only months after the store opened, articles starting appearing in the paper. Haggen was shortening hours, laying off employees. Pretty soon a visit to the local Haggen started feeling like an Eastern European supermarket experience in time of famine. The entire milk case was empty one week, along with the eggs, cheese, and sour cream. Sometimes juices were non-existent or the meat case was virtually meatless. Even bread was in short supply. I had planned to make a chicken marsala for dinner one night and could get the marsala, but not the chicken.

Sporadic deliveries became the norm. I decided to adopt the shopping strategy that I used while we lived in Europe in 2005 and 2006.  You don’t go with a menu in mind; you just buy whatever happens to be there and make something with it. Requires creativity and flexibility, and a tolerance for the occasionally inedible meal. In Europe, I didn’t know the language and had no idea what I was buying most of the time anyway. I discovered, for example, that those cold cuts we’d been having for lunch were actually horse. That package of cut up chicken parts turned out to be rabbit.  Here, at least, I actually recognized the products.

Then came the announcement that didn’t surprise anyone who had been shopping at the store: Haggen had declared bankruptcy and was closing all 83 emporia in Southern California. Sadly, this had to be the fastest food fail in supermarket history.

A Gelson’s supermarket is rumored to be opening at the Haggen/Albertson/Lucky/AlphaBeta location in late March. Just so we’re clear: Don’t even THINK of messing with the angled parking.