I Have No Idea How I Did It

Even though Olof and I have been married for 27 years, I still find myself locked in the mindset of the twelve years between my two marriages when I lived a truly penurious existence.

During that time, nothing got repaired unless I could fix it with duct tape, picture wire, or hair scrunchies (a grossly under-rated tool) and nothing got replaced until it absolutely disintegrated.

Some months after Olof and I married, he put his arm around my shoulder as he was leaving for work one morning and queried plaintively, “Dear, if the market goes up another ten percent, could we get a new bath mat?”

My younger son, Henry, now 42, recalls growing up in poverty. Yes, here in La Jolla. Upon hearing this, Olof, never one to miss an opportunity to affectionately ride me about what he felt were my marginal housekeeping skills, replied, “No, you didn’t grow up in poverty.  But you did grow up in squalor.”

Excuse me, but there are only so many hours in the day when you’re a working single mom of two carpool-intensive kids. I managed youth sports teams and was Pack Committee Chairman of La Jolla Cub Scouts in an era where all communication was by handouts or extremely inefficient “phone trees.”  (Does anyone even know what those are anymore?) I am insanely envious of team managers who can just post maps to game locations on a website.  I, meanwhile, did quite a few Cub Scout mailings in stop-and-go traffic on Torrey Pines Road on my way home from work.

An avid journal keeper and chronicler throughout my life, I sometimes consult my journals to check recollections for columns.  Recently, I came upon this except from a conversation with Henry, almost 10, dated March 9, 1990.  Rollerblades were the new fad toy and Henry was convinced he was the only kid who didn’t own a pair. He sat glumly in the back seat as we drove home from school.

"What's the matter, sweetheart?" I asked.

"Everybody we know is richer than we are," said Henry.

"Well, you got that right," I said. We rode silently for a while.

"Henry," I said finally, "what you need to understand is that we are not poor.  We just don't have any money."

Henry rolled his eyes. "So what's the difference?"

"Well, we own our own home. OK, several financial institutions own our home. But that's a big deal these days.  What we don't have is cash."

"Jamie's pool is bigger than our whole house," said Henry.  "And they go to Hawaii every Christmas and skiing every Thanksgiving. And they have a phone in their car. And he get five dollars for every A."

"Sweetheart, no matter where you go, someone is going to have more than you.  And even if Donald Trump [yes, I really wrote that!] proposed to me tomorrow, you'd still have to do chores.  Richness is relative."

"Only poor people say that."

"Yeah, but they shoot at you there."

Everything that went wrong with the house was on me.  A friend astutely observed soon after I took over ownership, “You need a lover who likes gardening and pool maintenance.”

I had traded every asset of the marriage plus taken out a second mortgage (co-signed by my wonderful father after banks laughed in my face) to buy my ex out of our house.  It was the best financial decision I’ve ever made but my entry level job and child support didn’t begin to cover the costs of living here

The house just got shabbier and shabbier until Olof married me and undertook some serious self-preserving improvements.  Like central heat, and an upgrade to our 50-amp fuse box.  He was tired of the kids using the toaster oven and blowing him off his computer.

I recently wrote a column about loving to sit outside on fall evenings listening to the Zen sound of crickets chirping.  I observed that communing with nature like this made up for all the years when the only thing I communed with was my watch.

I remember nights back then when I would have gotten the laundry done and piled it on the bed at 11 p.m., only to fall asleep on top of it soon after.  I didn’t even read one book a year.  If I had ten spare minutes between car pools, I took a combat nap

I just feel tired even thinking back on it.  I guess you just do what is required at the time.  I certainly wasn’t spending a lot of time pondering the meaning of life.

And, yes, we did get a new bath mat, although, frankly, I felt the old one still had life in it.  I could have kept its ratty self going for at least another year.

One of my greatest joys in retirement is to read at least three books at week, as opposed to the two pages a year I read during my 12 years of divorced working momhood.  I’ve noticed that some of the books I read have a Readers Guide at the end should it be a book club selection.

So here might be some questions that would stimulate discussion:

(1) Inga chronicles her early divorce life in her Dates From Hell series.  Which of her early dates was the biggest creep: the criminal lawyer with a cocaine habit and herpes? The commodities broker whose decrepit car required Inga to climb through the passenger side window in a short skirt? The newly-certified massage therapist whose date proposal was giving her a massage at half price? The guy who, tasked with renting a movie for the evening on her Video Library membership, rented “American Girls in Heat, Part II?”

(2) Inga maintains in her book that “Olof has always maintained that I married him for his skills with a sewer augur, but this is only partially true.”  After reading this book, do you agree that the definition of “romance” for single women with young toilet-ravaging children is more about plumbing and home repair skills?

(3) Inga and Olof met as exchange students spending their senior year of high school in Brazil.  They could have married each other the first time around.  Is there any accounting for the stupidity of youth?

(4) Inga’s older son, Rory, was adopted and turned out to be a diabolically creative child with world class skills at psychological warfare against adults, most especially his mother.  Which of Rory’s many escapades would you consider the most inventive:  the Jolly Jumper baby brother slingshot disaster? The dropping the big rock down the chimney onto the metal grate two feet from where Mom was reading prank? The spray-painting Henry silver crisis?  The Cleveland airport catastrophe? The Jack in the Box ketchup packets under the tires spraying the black sports car affair? The Philadelphia airport debacle? The 15-inch rubber penis in the guest bath during mom’s dinner party event? The Bomb Squad incident?

(5) When people adopt, they like to believe that how a child turns out is 5% nature and 95% nurture. Rory has turned into a devoted husband and father with a successful career, but still likes to keep his hand in things, as Inga chronicled in the chapter about Rory hijacking her library account when he was 32, reserving such titles as “The complete illustrated guide to lesbian sex” and “How to cope with your colitis and hemorrhoids.”  Is a person’s nature fixed at birth?

(6) In a chapter entitled “The son also rises”, Inga writes about her younger son Henry receiving a prestigious scholar-athlete award, and, when interviewed by local papers, was asked if there was anyone he wished to thank.  He replied, “I’d like to thank my dad for teaching me how to have fun.”  Dad had never driven a single sports practice carpool or helped on a single school project. Was Inga justified in fantasizing over the next few weeks about poisoning Henry’s lunches?

(7) Inga’s chapter on how to be a good mother-in-law was summed up in two words: “Shut. Up.”  Agree or disagree?

(8) Inga’s granddog Winston was prone to mount guests’ legs under the dinner table. Why do you think dogs prefer women’s legs over men’s?

(9) In a chapter entitled “There’s more cookin’ than the food” Inga writes about Olof having an emotional affair with a southern cooking show host. Every time she said, “mah bourbon pecahn pah” Olof’s eyes would go out of focus. Can this be considered culinary adultery?

(10) Inga was dismayed to realize that all the TV shows she likes are sponsored by anti-depressants.  Should she be taking Cymbalta?

(11) Inga is an avowed technomoron and is hoping to die before she has to upgrade to another iPhone, for which everything she currently knows how to do will cease to work. Olof, an engineer, insists that the reasons that phones don’t come with nice written instruction manuals anymore is because the working of them is “intuitive.”  Is Inga justified in smiting Olof when he says that?

(12) Inga has written a chapter called “Why it takes four women eighty emails to set a lunch date.”  Is this true of book clubs too? Or is the issue there why some people show up without having read the book just to drink wine and announce, “Can someone summarize it for me?”  Should those people be permanently banished and never allowed to join a book club again? Yours especially? 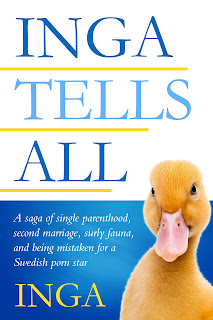