Well, after last week’s column I haven’t heard from my high school classmate Dave Barry’s lawyer asking me to cease and desist writing about him, so I’m going to continue taking advantage of our extremely distant association to reminisce about the Pleasantville High School class of 65’s 40th and 50th reunions.

I would reminisce about the 10th, 20th, and 30th too but I didn’t go to them.  Too far to go to suburban New York City from San Diego.  But I was persuaded by a pathologically-persistent classmate to come to the 40th all the way from Sweden where we were living at the time.

If I could change one thing about the 40th reunion it would be to magically remove all photographic evidence of me.  The afternoon before I left Stockholm, a stylist at a Swedish salon misunderstood my instructions for a “trim” and, a mere twelve hours before I was leaving for New York, transformed my shoulder length hair into a short, layered pixie haircut that I had no idea how to style.  (I have to take off my glasses while they do my hair.) I tried to convince myself it was not as bad as I feared, until Olof came home and said, “Hey - Sandra Dee haircut.  Great idea for your reunion!”  I hadn’t lost any weight but had hoped that at least my hair was going to look nice.  Now I was going to my reunion as a fat Sandra Dee. (And by the way, wasn’t she dead?)  I do NOT embrace change – and especially the night before my fortieth high school reunion to see people who I have not seen in four decades.  To make matters worse, Tropical Storm Tammy was due to wash through the New York City area that weekend.

Pleasantville High School reunions have a predictable itinerary.  There is the pizza party at the Armonk American Legion Hall on Friday night followed by a dinner dance at the Pleasantville Country Club whose heyday was in the 1940s.

By the time the pizza party started at the American Legion Hall, Tropical Storm Tammy had created a deluge. The humidity was about 150%, and my now-short hair, the ultimate humidity barometer, looked like my head been plugged into an electrical socket.

There was plenty of pizza, beer, wine, and soft drinks.  But no name tags, which everyone agreed was a massive oversight on the reunion committee’s part.  Instead it was kind of like a surreal Halloween party where you were trying to guess who was inside the “costume” that was their much older self.  You know there is someone you once knew in there but you’re really not sure whom.
“Who did you come as?”
“Oh, I came as the pot-bellied gray-haired balding version of the former seventeen-year-old Joe Smith.  What about you?”
“I’m dressed as the overweight crepe-necked three-chinned version of Home Coming princess Muffy Minton.”
“You look great!”
“So do you!”

OK, so it didn’t quite go like that.  And for the record, I thought that as a group, we had held up extremely well. But it was like meeting all new people.  And of course, some were spouses, just to confuse the issue. Ja, really, really needed name tags. (Large print would have been even better.)

One person who didn’t need a name tag (and talk about holding up REALLY well) was our Pulitzer Prize winning classmate, Dave Barry, who attended the pizza party the first night.  Of course, we all wanted a photo with him, preferably signed “to my best friend from high school, Dave.”  He was incredibly accommodating. I, in fact, have such a photo (minus the inscription) but unless I could photoshop my hair, it will never be seen.

What was absolutely delightful about the reunion was that nobody was trying to impress anyone; people were just being their most down-to-earth and unpretentious selves.  Whatever they may have needed to prove in the past, they seemed to have proven - or given up on. What people did for a living rarely came up. People seemed most interested in connecting with each other on a personal level.  Very refreshing indeed.  Oh, if only high school could have been like that.

It being a high school reunion, we also had to have embarrassing impromptu musical performances.  At the dinner dance at the Pleasantville County Club the second night, our table did the Supreme’s “STOP – in the name of love”. The four women from our table did the arm movements and we all sang the lyrics.  Unfortunately, we only had three copies of the lyrics for the eight of us and as we were moving, so were the lyrics. Very hard for people with bifocals to keep up, especially in such low light.  But we had fun and occasionally even got the choreography in sequence.


Stay tuned next week for the 50th reunion! 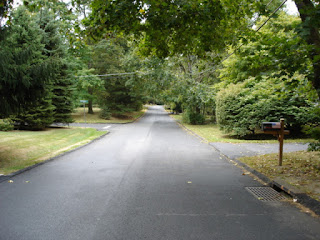