Astonishingly, I am approaching the 10th anniversary of writing Let Inga Tell You, a gig I thought might last three months. But here we are.  And that is why, having written about everything I could think about writing about in my non-life, I am going to mine my high school years at Pleasantville (NY) High School and my famous classmate, whom I confess I barely know, Dave Barry. Desperate times call for desperate measures.

Other than the Reader’s Digest, which wasn’t actually in Pleasantville but used the address, Dave truly is Pleasantville’s claim to fame.  In fact, probably the one enduring question of all of the alumni of PHS’s class of ’65 was, “Why wasn’t I better friends with Dave Barry?”

One possibility is that Dave wasn’t actually from Pleasantville. He grew up in nearby Armonk that had no high school of its own at the time, so starting in 10th grade, the Armonk kids were bused to Pleasantville. Two alien populations with long established social orders who had each been together since kindergarten were suddenly inflicted upon each other. They never really entirely meshed.

I actually remember Dave Barry as being really kind and really funny even then.  These were not qualities that were often ascribed to high school students.

I know I was in Monsieur Bombardier’s French class with him, and especially Mr. Wittern’s junior year Honors English. Mr. Wittern was a major positive influence in my writing life. I remember him telling me that he had several students, including me, for whom he was saving room on his bookshelf for our future work. Dave Barry was another.  Of course, he would have needed an entire bookcase for Dave’s.

I’ve probably read all of Dave’s work, including his brand new book, “Lessons from Lucy,” not only because they’re hilarious but because he often writes about people and places I know well including his years at PHS. The depressing part is that while I try to write a column with two really good lines, every word he writes is hilarious. I have no idea how he does that.

I’m pretty sure I recall that homerooms were alphabetical so we would have been in the same one.  In that era, the homeroom teacher read the morning bulletin.  I wasn’t a cheerleader-popular kind of teenager, but I was very social and a good student. As a high school sophomore, however, my only elected office was secretary of the Organ Club (music, not donors).  I think it will be obvious that there was not a lot of cachet in this.

When club meetings were read, the creepo who sat next to me (definitely not Dave) would lean over and leer. “Hey, Inga, wanna play MY organ?” My husband, Olof, was fascinated by this story.  “You should have said, ‘I’m sorry, I don’t play lesser instruments,’” Olof opined.

There is one Armonkian I’m still close with to this day. I had been active in the school paper, The Green Lantern (green and white being our school colors) and was thrilled to be named Chief Editor my senior year.  So imagine my surprise at the paper’s first fall meeting when this guy I’ll call “Tom,” who had never worked a nano-second on the paper, shows up and announces he is co-Chief Editor. Turns out he was applying to Yale and his guidance counselor thought he needed at least one extracurricular activity.  Preferably a prestigious one. So she arranged with the paper’s faculty advisor for Tom to be Co-Chief Editor. My first experience with graft and corruption.

Tom and I ended up bonding over my doing absolutely everything and him doing absolutely nothing.  We are in regular contact to this day.  He still sends me affectionate messages alluding to our time together on the yearbook. “Tom, you effing moron,” I always reply, “it was the newspaper!”

BTW, admissions crime does pay.  Tom did go to Yale and on to a highly prestigious career. Presumably all based on his faux credential of being Co-Chief Editor of the Green Lantern.

But back to Dave. What I really want to thank him for is my colonoscopy.  Some years back, my gastro guy recommended one to me and, noting my lack of enthusiasm, proceeded to hand me Dave’s hilarious column on the subject from a stack on his desk. So in awe was the gastro that I had actually gone to high school with the guy who had written the Definitively Funny Essay on Colonoscopies that he lost all interest in discussing my large intestine, as astonishing as that may seem. Still, I like to think that on the day of the procedure, my colon got deferential, if not reverential, treatment because of Dave.

Interesting, my next colonoscopy eight years later, when I didn’t mention Dave, was a disaster. I therefore recommend that people tell their gastroenterologist that they went to high school with Dave Barry whether they did or not. 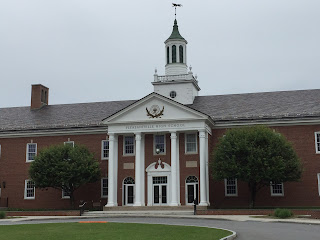