While I feel that my engineer husband, Olof, and I are hugely compatible, the Venn diagram of our marriage often doesn’t have a lot of overlapping travel circles.  I wrote previously about a trip he took last year with four fellow-physics-major college roommates that was basically a geek fest tour of the Pacific Northwest.  They took in the Boeing factory, then Reactor B, and apparently got positively misty-eyed at the Laser Interferometer Gravitational-Wave Observatory in Hanford.  The only people who had more fun than they did were their wives who didn't have to go.

Another trip on Olof’s bucket list has been the annual air show (AirVenture) in Oshkosh, Wisconsin. A former Air Force pilot, Olof loves all things aviation.  Some months ago, Olof and two local friends devised a plan to take the train (Olof loves long-distance train travel as well) across the country to Chicago and drive up to Oshkosh for the festivities.  The air show itself actually sounded pretty cool to me but three days in a train across the Midwest was about two and a half days more than I was enthused about.  I’ve driven it.  A little bit of prairie goes a long way in my view.

It amazes me that you can actually get Wi-Fi much of the time on a train even in long stretches through Nebraska, so we were able to talk regularly. I think Wi-Fi would have really improved the trip for all those folks who trekked across the country in covered wagons. Probably a lot less “are we there yet?” whining from the pioneer kids. And don’t even get me going on how it could have helped the Donners.

I’ve written before about how Olof has always been underwhelmed with my kitchen cleanup standards which, seriously, are not that bad. Since he retired, he’s been the official dishwasher. He even sweeps the kitchen floor every single night to get the five crumbs the dog didn’t get to first.  Why one would want to spend one’s golden years sweeping is beyond me.

But when he’s traveling, he enjoys engaging me in affectionate if savage banter about how the household is faring without him. I don’t usually do a whole lot of cooking (translation: none) while Olof is gone which really cuts down on dishes.  If I may say so, I’ve done a whole more dishes in my lifetime than he has and frankly, I’m over them.  And if they accumulate in the sink for a few days, I can live with it.  It’s my own version of the Law of the Conservation of Energy.  I conserve energy by not doing it.

I still have an email exchange from Olof’s trip last year.  I had texted Olof a photo of the kitchen with nothing on the counters.

Inga: This is a quiz. What’s wrong with this picture?
Olof: You’ve eaten out every single meal?
Inga: No, I ran the dishwasher!
Olof: You know how?
Inga: Ooooo, I never knew you had this vicious side when I married you!
Olof: I figured you’d just open the dishwasher and let Lily lick the dishes.
Inga:  Dang! You’ve discovered my secret. I usually let her lick the counters when she’s done. Oops! Shouldn’t have said that!

I do have to say that Lily was distressed to have her usual routine disrupted, and Olof was concerned on her behalf.  He was especially concerned about Lily not getting her usual 6:45 a.m. walk, their daily ritual. Sure enough, while Olof was gone, at precisely 6:45 a.m. (still the night before, in my view), she’d be batting my head with her paw breathing doggy breath in my face.  “Time to get up! Let’s go for a walk!” Fortunately, I only needed to get up, open the back door to the patio and point Lily in the direction of the back yard to fulfill any pressing early morning needs she may have. I texted Olof a photo of Lily plodding out to the backyard and hash tagged it #self service.  He texted back: “So sad! And hungry too!” He tacked on a teary emoji.  Let me be clear that this dog was well fed and exercised in Olof’s absence.  She just didn’t get it on his timetable.

Thunderstorms in the Mid-West caused the train to arrive in Chicago 13 hours late, which is even worse than our typical experience on United. So after three days on the train, the guys were fairly glad to finally get off and drive to Oshkosh.  One of the chief attractions for Olof at the air show was the opportunity to ride on vintage planes, including the Ford Tri-Motor of which only eight airworthy aircraft still exist.  I have to say it sounded really cool. But I have to sign off now. He’s coming home tomorrow and I have ten days’ worth of dishes to do. 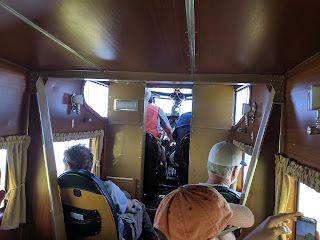 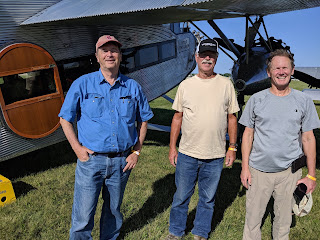 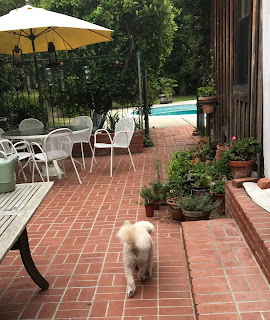