Last week I wrote about helping my neighbors rescue a young cat that had planted itself outside their sliding glass doors and meowed piteously for two days.  They already had a cat and didn’t want another one, but compassionate pet owners that they are, they did make a bed for it on their patio that night, and gave it some dinner. The cat allowed them to pet it and clearly seemed to be asking them to take it in.  Fearing leaving it out a second night given coyote sightings in the neighborhood, they decided to bring it to the Humane Society the next afternoon.

But the cat was spooked by the sight of their cat carrier and fled into my yard, where my efforts to sneak it in to a back bedroom were met with an encounter of the worst kind with 19 pounds of angry white fluff (our bichon-poodle mix). Lily tried to eat the cat who responded by sinking its exceedingly sharp fangs into my hands seven times before I concluded, OK, I get it, you want to fend for yourself.  Lily only has three teeth but they can be used for harm.

Since there was no history on the animal and no tag or chip, the animal had to be quarantined for ten days before being evaluated for the adoption pool, especially given all the bites. I assured the Humane Society that the cat had merely been defending itself from our Cujo-wannabe dog.

Just a few weeks ago I wrote a column about people not tagging and chipping their dogs and cats.  It would make it so easy for me and my many animal-loving neighbors to get them quickly back to their owners when they escape their homes or yards.

One of the focuses of my column last week was my engineer husband’s calculation of my odds of infection if cat bites have a 40% risk and I had sustained seven. Ask an engineer a question and you will get a full report. Fortunately, all my bites healed with aggressive home care.

The Humane Society did indeed call me (I was genuinely impressed) after 10 days of cat quarantine to report that since the cat and I were both still topside, it would likely be put up for adoption.

As I was taking a walk several days later, imagine my surprise to see a newly-posted flier for a cat that I knew instantly was The Cat. I’d know those teeth anywhere.  OK, the photo didn’t show teeth but the markings and coloring were very distinctive.

But the woman who answered the number on the flier insisted that the kitty we had rescued two weeks earlier couldn't possibly be hers because her pet sitter, who was caring for the cat during the two weeks that she and her family had just been away on vacation, had insisted their cat had only been missing "a few days."  I’m thinking the pet sitter is a lying weasel.  The cat showed up at my neighbors’ the day after this family left town. And it was hungry.

I gave her the Humane Society intake number and reiterated I was really sure from the cat's distinctive markings that this was her cat. I even texted her photos I'd taken of it.  I also mentioned that the cat had gone into the adoption pool four days earlier so they should get down there quickly since it was a young, very sweet cat.

The next day, I got a brief text message from her that they'd gone to the Humane Society that morning and it was indeed their cat, and that her kids were thrilled. She never asked my name or gave me hers.

Did I mention the flier had offered a reward? Not a word from her about it. I'd never take a reward for returning someone's pet or phone or wallet to them. But I would have asked that she donate the money to the Humane Society who had just spent two weeks caring for this kitty, medically and behaviorally assessing it, and keeping it under quarantine for ten days. Never mind that my neighbors devoted most of their weekend two weeks earlier to caring for the cat and driving it down to the Humane Society, not known for their speedy intakes. I texted this lady the neighbor’s names so she could thank them. She didn’t. (I never mentioned the bites to the cat’s owner since they were my fault.)

We’re truly glad the cat is home safe, that it didn’t get eaten by a coyote or squashed by fast-moving traffic.  But seriously folks.  All it would have taken was for a tag with a phone number or a scannable chip for this to have been resolved in ten minutes. Are you listening?  Alas, don’t think so. 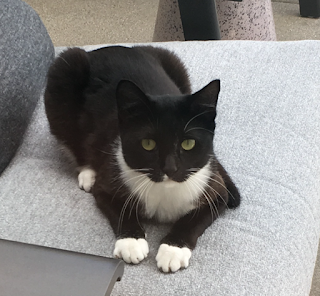 How is this not their cat? 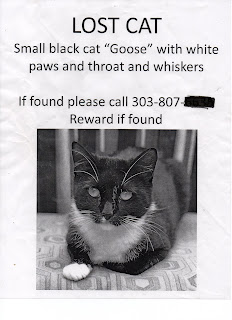