By all accounts, this has been a particularly bad rat year.  The pest control companies, reportedly, are in hog, er, rodent heaven.

Unfortunately for us (at least as far as the rodential population is concerned), we have a prolific orange tree, a rat’s food of choice.  Walking outside in the morning, our brick walkway is littered with hollowed out orange rinds, the remnants of the previous night’s rat-chanalia.   And this, by the way, is one of my biggest issues with them:  how hard would it be for the little slobs to just roll the rinds into the bushes and let them quietly biodegrade?  I’m not an unreasonable person.

Eating dinner on our patio in the evening last year, Olof and I watched the rats scurrying back and forth along the top of our six-foot wrought-iron pool fence and escaping into the orange tree.  At one point, it occurred to us that it could actually be the same three rats running around in an endless circle just to annoy us while their friends filmed it for rat reality TV.

Summer is our outdoor entertaining season.  You’re trying to have a classy dinner party and one of your guests says, “Um, I think I just saw a rat.”  It’s tempting to deny it with a breezy “No more wine for you!” but in the end we just had to admit defeat and turn our furry friends into a party game.  “Person who sees the most rats gets an extra dessert!”  After a couple more glasses of wine, everybody kind of got into it. Or they have plenty of rats at their own place. Or maybe they’re just drinking more because they can’t believe they’re at a La Jolla dinner party counting rats.

Over the years, we’ve tried pretty much every rat-ridding tactic out there, including the pricey pest control folks who trap them humanely and maintain that they drive the rats out to the country and let them go. They actually say this with a straight face.  We’ve also used the finger-breaking steel spring traps and finally moved to the inhumane rat poison that we use now.  I admit that on the Judgment day, there will be a lot of beady-eyed creatures squeaking “Yes, that’s her!”  But I did ask them nicely to go away.

In a previous Bad Rat Year (a term that will never cross the lips of the La Jolla Chamber of Commerce), I was on a first name basis with the Vector Control folks who taught me how to fill the centers of 18-inch-long 4-inch diameter sections of PVC pipe with rat poison (so the neighborhood cats can’t get to it), and secret them around the yard.

But in recent years this has become problematical in itself.  We are frequently visited by tiny inquisitive grandchildren, who, just like rats, would be attracted to shiny blue pellets. Ditto for our dog, Lily.

Lily, self-appointed Vanquisher of the Furry Peril, likes to hang out near the orange tree and bark at rats scurrying along the pool fence.  Alas, it doesn’t actually get rid of them, but it’s very entertaining to watch.

We’d really like to be more humane in our e-rat-ication efforts but there would not be enough alcohol on the planet to make up for spending our weekends driving rats out into the country.  Besides, what else would we do with them?  (Well, there IS that one neighbor…)

Still, the rat situation got so totally out of hand that last year we removed all 800+ oranges from the tree and donated them to the orphanage in Tijuana. But we really like orange juice from our totally organic oranges.  Surely there was some way we could work this out with the local rodential population?

This past year, our new lawn guy suggested putting metal sheeting around the base of the orange tree. No one had ever suggested this to us before.  Not aesthetic for sure, but it makes it harder for the little varmints to get up there.

Harder, but not impossible.  They could jump from the top of the wrought iron pool fence a distance of about a foot onto the tree.  Jumping back to the fence might be more problematic but that’s assuming rats have sequential logic.  Our lawn guy trimmed the tree back to require them to be Olympic-class long jumpers.

In order to assess our success, we posted a chart on our refrigerator documenting the dramatically lessening numbers of hollowed-out orange rinds on the bricks each morning.  It’s all very scientific.  Fewer rinds, fewer rats.  Unless, of course, they’re hiding the rinds just to toy with us.  We wouldn’t put it past them.

So this year, we’re actually having orange juice for breakfast instead of staring at our orange-less tree.  Sorry, rodentials, but you’re just going to have to find new real estate. 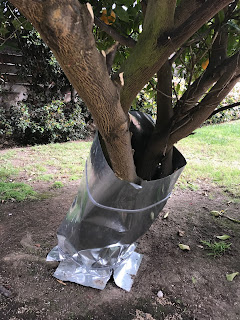 It's actually amazing how well this works 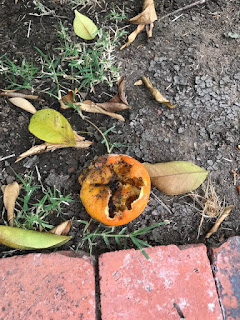 The least the little slobs could do is roll the
chewed out rinds into the bushes!
Posted by Inga at 11:33 AM