I’ve written recently at how dismaying it is to see so many dogs and cats loose in my neighborhood without  collars and tags – and as it turns out, without chips either.

A few weeks ago, I kept hearing a cat meowing piteously at my neighbor’s house and queried if their house cat had gotten out by mistake. They texted back that an un-collared cat had shown up and parked itself on their patio furniture clearly wanting food and attention.

The next day, when the cat was still there and still meowing, they concluded it was lost or abandoned, and not wanting to leave it outside for a second night due to a frightening number of coyote sightings and resultant cat deaths in our neighborhood, decided to take it down to the Humane Society.  Except that as soon as they approached it with the cat carrier, it disappeared through the fence into my yard.  We tried to find it to no avail.

A few hours later I noticed the kitty in my patio. It came right over, allowing me to pick it up.  Clearly someone’s pet and not a feral cat.  I knew our dog was zonked out in the living room so I decided to tiptoe in the house with the cat and put it in my office then text my neighbors to come over with the cat carrier.

I had barely closed the back door behind me when our 19-pound bichon-poodle mix, Lily, woke out of the Sleep of the Canine Dead sensing an intruder in her midst and came charging into the room. I didn’t want to drop the cat right in front of Lily who, despite only having three remaining teeth, seemed determined to use them for harm.  The cat, terrified, alerted me to her wish to be released by sinking her razor-sharp incisors into my hand, then repeating this six more times until I finally got the message.

Lily and the kitty chased each other around the house until I was finally able to corral Lily in a bedroom.  My wonderful neighbors came with the cat carrier and lots of Neosporin and took the cat down to the Humane Society. The Humane Society said they would be putting the cat in quarantine for 10 days, for both my and their other cats’ protection. I or my estate was to call them if I succumbed from feline-related afflictions before then.  (OK, that wasn’t exactly the way they put it.)

Searching the internet, I learned that cat bites have a 40% chance of infection and tend to be far more serious than dog bites.  I decided that at the slightest sign of infection I would head to Urgent Care but would keep my multitude of wounds well cleaned, slathered with Neosporin, and wrapped in the meantime.

My husband, Olof, was out of town at the air show in Oshkosh. That night, I emailed him:  If a cat bite has a 40% chance of infection, do seven cat bites have a 280% chance?   Shortly thereafter, an reply arrived back entitled in pure Olof engineer-ese:  “Cat Bite Calculation.”

I’m hoping that by now you’re seeing a pattern.  The probability that n bites won’t become infected is (3/5)n; and when n = 7, the reported number of bites you have, the probability is (3/5)7.

[To be continued next week] 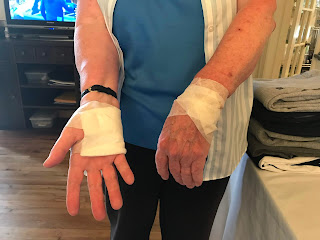 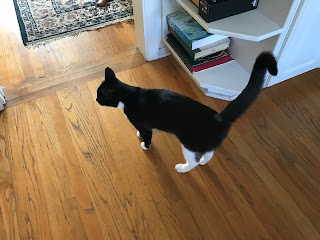