There was a time, and I’m talking like five years ago, that toilet paper rolls were pretty standard.  This, of course, was because the toilet paper dispensers in most bathrooms were pretty standard too.  But then Double Rolls came along – twice as much toilet paper in one roll so you presumably only had to change it half as often, unless you had a toddler who liked to grab the end and run through the house with it.  (I once had such a toddler.)  Or in a moment of temporary insanity, you went for the street food in Tijuana.  (No amount of toilet paper in the world will cover that.)

Fortunately, the Double Rolls still fit on the toilet paper-dispensing spindles in my 1947 house.  But then Mega Rolls suddenly appeared which purported to be equivalent to four regular rolls, or two double rolls.  As a senior citizen, I do not need to annoy my few remaining synapses with toilet paper math.

Of course, none of this matters since the Mega Rolls don’t fit in my toilet paper dispensers anyway.  If you need an industrial-sized shoe horn to wedge it in there, it doesn’t roll, which is, after all, the point of the thing. I have accidentally bought Mega Rolls several times when I was in a hurry because increasingly, that’s what’s on the shelf.

But just when you think it can’t get any crazier, now there are Super Mega Rolls, which purport to be the equivalent of 36 regular rolls (or 18 Double Rolls or nine Mega Rolls) crammed into six giganto wads for which I’d have to buy a free standing dispenser that I’d have to set in the bathtub of my tiny little bathroom.

I’m sure you’ll agree that Feature Inflation has already consumed our country in the form of consumer goods that have increasing numbers of idiotic features added to them for no other reason than manufacturers seem to think that people want them. For example, alarm clocks that have a choice of six revolving glow-at-night colors all of which make it impossible to find the controls that actually set the alarm.  (I was gifted with one. I hate it.)

Major appliances are even worse.  It is my personal view that any appliance for which you need a manual is poorly designed.  My husband might rephrase that as any appliance I can’t work without consulting a manual is not only poorly designed but, if small enough, should be hauled out to the driveway and run over with my car.  I have a very low frustration tolerance for electronics.

Feature Creep truly terrifies me.  This is why I will ultimately end up in Assisted Living.  Not because of my health but because I can’t fix the remote on my TV after I’ve accidentally pushed one of the dozens of useless buttons on the damn thing. I will need to live in a place where they have people who do that.

(This is the career of the future, millennials.  House calls to help us oldies override all the features on our Smart appliances.  You could make a living.)

I realize it’s a bit of a stretch from toilet paper inflation to feature creep to grade inflation, but it’s really all part of the same scary mind set. When I was reading articles this spring about high school valedictorians, I was amazed to read that some had Grade Point Averages over 6 – on a 4-point scale.  When my sons went to high school, the only classes that were weighted to 5 were actual Advanced Placement courses since they were considered college level and counted as college credit. If you took every AP class the school offered, the maximum GPA you could achieve was 4.3.  Now it appears that you can get GPAs of 5 or even 6.  If toilet paper roll inflation is any indication, will there be 10-point GPAs on a 4-point scale?

I maintain that toilet paper rolls are symptomatic of our society’s constant desire for bigger, better (I’d dispute better), more.

There’s nothing I can do about grade inflation or feature creep. Sometimes you just have to pick your battles. This is why I implore you all to write to your Congress person and implore them to pass legislation about toilet paper roll inflation.  What’s after “Super Mega”?  Super-Duper Mega? Super-Duper-Ultra-Wowie-Zowie Mega?  Will toilet paper rolls become the size of basketballs?  Will you need special dispensers mounted on your ceiling that could fall on your head in an earthquake and knock you unconscious? (If you live in California, you can’t be too careful.) This is a real threat unless we fight the Toilet Paper Industrial Complex now! 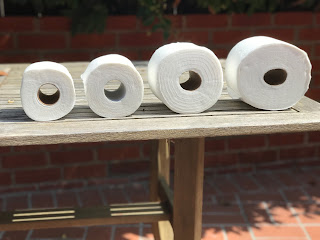 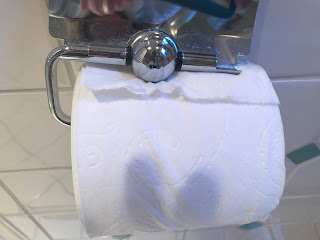 Even un-rolling a third of this Mega Roll, it is too
tight for the dispenser 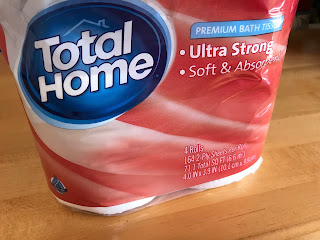 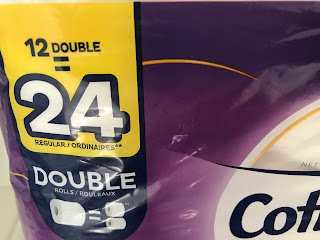 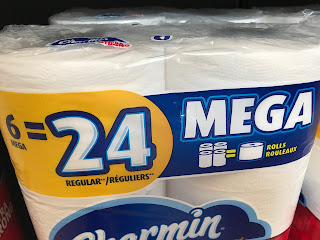 Too big for toilet paper dispensers in my house 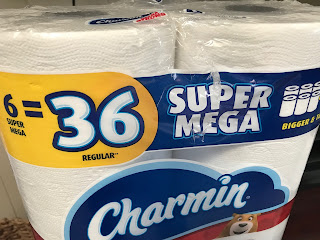