The Power Of Dogs

After our beloved English bulldog Winston died suddenly of a heart attack in our living room in 2016, Olof and I were so flattened that we swore we’d never have another dog.  But a local rescue agency with radar for mushballs asked us to foster several dogs “just for a week,” and before we knew it, we were suddenly the adoptive parents of Lily, a 7-year-old 15-pound bichon-poodle with rotten teeth and breath so bad it could scorch your eyebrows.  This was apparently why she had been relinquished by her former owner.

Like Winston, she also turned out to have pretty serious allergies. I informed our vet that we were adopting another allergy-afflicted dog who also had serious dental issues, so she could go ahead and put down the deposit on that Mercedes. We consider Lily’s medical care our new 401k.

Like many dogs, Lily considers it her personal duty to defend us from faunish peril, including and especially tiny lizards.  Our back doors are open pretty much year-round to let air in and Lily out, so it is not surprising that occasionally a small reptile makes a wrong turn and ends up in the house.  Recently Lily saw one scurry from the hallway into the guest bath.  An alien life form had breached the barricades and invaded her personal territory! Totally unacceptable!  When I came to investigate her hysterical barking, I found her she standing at alert just outside the open bathroom door, one foot up in pointer position.  This would make more sense if she were actually a pointer, rather than a bichon-poodle mix.  But she wanted me to be clear that the intruder was still in there. “You will not go in there on my watch!”  she seemed to be saying.

But go in there and rout it out herself?  Hell no.

And while we’re on the subject of bathrooms, it is not surprising that dogs would consider bathroom activities to be social events.  From Lily’s perspective, every time she makes a shadoobie, we’re always standing right there, opaque bag at the ready.  The fact that we don’t seem to need bags ourselves is irrelevant; it’s still a communal activity.  If the bathroom door is not closed tightly, Lily will nose it open and join the occupant. In fact, she’s fairly annoyed if you exclude her and will park herself just outside the door where you can easily trip over her and do a face plant into the armoire which would serve you right for being so anti-social.

Once inside the bathroom, she will join Olof as he stands in front of the commode. She assesses the proceedings with the laser focus of an Olympic Figure Skating judge.  Artistic presentation? Meh. But given the added difficulty elements inherent in Olof being 72, she is more than willing to bump up the score for technical merit.

Once Lily’s dental problems had been ameliorated to the tune of $1,500, she began eating voraciously and quickly packed on four more pounds.  You don’t have to be a mathematician to realize that four pounds on a 15-pound dog is not a desirable percentage of weight gain.  Every month when she goes in for her CADI shot (immunotherapy allergy shot) she gets a weigh-in as well.

“Lily, you little porker!” we admonish her in front of the vet if she’s over 20 pounds.  We swear that she has somehow figured out how to get into the refrigerator after we’re asleep despite the lack of teeth marks in the cheddar. “It’s middle-aged spread, Lily,” I say sympathetically on our way out.  ‘Happens to the best of us.”

While Lily has become fast friends with our pool guy, she regards our lawn maintenance man as her mortal enemy.  The second he shows up on Wednesdays with his lawn mower, 19.9 pounds of enraged white fluff is hurling itself at our French doors.  “He’s stealing our grass!  Again! And you let him!”  She is eager to sink her three remaining teeth into the side of his mower. Despite her lack of bravura in the face of small reptiles, she is unafraid of machinery.

We really have no idea what Lily’s first seven years were like other than that she was obviously abused by male persons. We learned this after Olof returned home shortly after the foster agency had dropped off Lily for her “one week stay” and she sank her teeth into Olof’s leg.  But she has gotten over that, and is utterly devoted to Olof. In the morning, Lily likes to wake up Olof for her morning walk by standing on his chest and engaging in what he calls “nuclear kissy face” – a full-on doggie saliva facial guaranteed to make sure she cannot be ignored.

From being adamant that we would never have another dog after Winston, we can only ask ourselves:  how would we ever live without one? 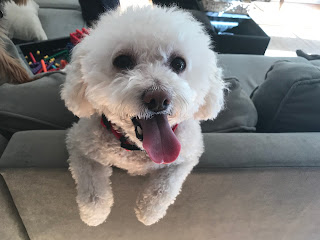 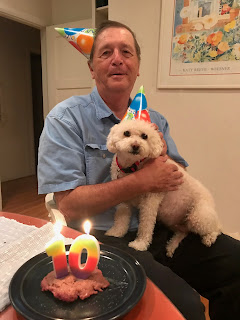