This fall will commence my fourteenth year of writing “Let Inga Tell You.”  It’s been the best retirement gig ever. I’ve covered a lot of topics, some of them repeatedly: technology, kids, husbands, rats, weight, parking, appliances, Covid, and a host of La Jolla-centric issues.  Over the last few columns, I re-capped some of my favorite leads from the time I started this column. [No, I’m not retiring.]  This week I’m covering my on-going issues with health, aging, my house, life, and, of course, chocolate.

I’ve spent considerable time over the years pondering the mysteries of the universe, but the one I truly can’t solve is why it takes four La Jolla women eighty emails to find a mutually-agreed upon date for lunch.  [June 30, 2011] [This column has had more reprint requests - as far away as South Africa- than any other column I’ve written.]

There was definitely a selection factor about the people who attended my 50th high school reunion in suburban New York a few weeks ago.  We were the people who weren’t dead. [Aug. 13, 2015]

Everybody has a fantasy about what they’d do if they won the lottery. I’ve always been clear about mine: hire a live-in masseuse. I’d get a minimum of two massages a day of about four hours each. In fact, some days I wouldn’t even get off the table, especially if I could figure out a way to simultaneously get a straw into a glass of chardonnay.  [August 7, 2014]

Over the twelve years I’ve been writing this column, chocolate has been a frequent topic, most recently as a health food, which, by the way, it has finally been determined to be.  I was definitely born too soon.  [June 9, 2021]

Several years ago at a holiday lunch, I was seated next to a woman who had opened her own clothing boutique in North County. She thought it was a travesty that women’s clothes were mostly targeted toward the really slender. So in addition to carrying clothes for the emaciated svelte (my term), it was her plan to design clothing for her boutique for the “larger woman.” “What sizes?” I inquired, suddenly taking interest.  “8-12,” she says.  It was all I could do not to accidentally knock her Nicoise salad (dressing on the side) into her scrawny size two lap. [January 17, 2022]

On January 1, I always vow – in writing - that this year I will lose the forty pounds I gained on the White Wine and Mrs. Fields Depression Diet during my divorce.  A minor detail, upon which we shall not dwell, was that the divorce was twenty-six years ago. Dec. 31, 2009]

I recently saw a beautiful choker necklace in a catalog and knew I had to have it.  But when it arrived, I discovered that the model had one thing I didn’t have:  a neck.  [July 14, 2011

It has not escaped my attention that all of my favorite TV shows are sponsored by antidepressants.  [Nov.17, 2011]

You know you’re getting older when you catch your adult kids walking around with a tape measure envisioning the remodel after you’re dead.  [May 3, 2012]

Last week I wrote about my husband Olof’s surprising heart attack after he’d just spent a year getting down to his ideal weight, eschewing alcohol and bad carbs, and walking two hours a day.  So much self-sacrifice and you STILL have a heart attack? Profoundly unfair. I could only wonder afterwards: should I just stick with chocolate and chardonnay, my food groups of choice? I would NOT want to risk a cardiac event. [Feb. 8, 2018]

You can hardly pick up a magazine these days without reading about the Japanese uber-organizer Marie Kondo whose best-selling book about tidying advises only keeping things that “spark joy.”  Does that include husbands and children? [Feb. 7, 2019]

A hazard of being a multi-ethnic household this time of year is that I’m always afraid the Menorah will set fire to the Nativity scene.  [Dec. 5, 2013]

This time of year, we start hearing a rat family scurrying around our attic crawl space searching for warmth as San Diego’s version of winter begins. Honestly, these rats are such wusses. It’s San Diego you guys. It’s 60 degrees. They’d never make it as New York rats, let me tell you.  [November 20 2014]

A mere month ago I conducted what I call a Preemptive Rodential Offensive, denuding my orange tree of 700+ oranges to avert our annual summer rat invasion. A rat accompli, the only fauna I’d now have to deal with was our visiting grand dog, Winston. That was until my husband remarked, “Do you hear quacking?”  [June 27, 2013] 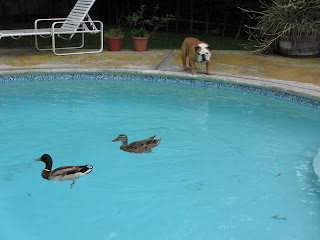