This fall will commence my fourteenth year of writing “Let Inga Tell You.”  It’s been the best retirement gig ever. I’ve covered a lot of topics, some of them repeatedly: technology, kids, husbands, aging, rats, weight, parking, appliances, Covid, and a host of La Jolla-centric issues.  Over the next few columns, I am going to re-cap some of my favorite leads (or ledes as they say in the newspaper biz) from the time I started this column. And no, this doesn’t mean I’m retiring.  (You should be so lucky.) This week we’ll start with: Husbands (particularly my engineer husband, Olof).

We know couples who contend they can talk to each other about “anything.”  My husband Olof agrees that’s the way relationships ought to be, so long as you never actually do it. [Sept. 26, 2013]

When Olof married me sixteen years ago after eight years of commuting from the Bay area, I knew it was important for him to have his own space in my house since he’d had to give up his own home.  Since Rory had just left for college, I told Olof that room was his to do what he wished. Who knew I married someone with no taste?   [Feb. 24, 2011]

A while back, I wrote about how Olof and I were engaged in dishwasher wars now that he had taken over this chore in retirement.  Three-plus years later, after considerable discussion and negotiation, I would like to report that…nothing has changed.  [April 18, 2019]

Now that Olof no longer requires a high security clearance for his job, I can safely divulge that all anyone ever needed to do to get him to spill every secret he knew was tie him to a chair in front of a continuous loop of feminine hygiene commercials.  [May 20, 2010]

When my husband, Olof, asked me what I wanted for my birthday, I didn’t hesitate to request a top-of-the-line sewer auger.   Now, this might suggest that the romance has gone out of the relationship or worse, could be considered a dismal metaphorical condemnation of our union.  [Nov. 7, 2013)

I wrote last week about finding the ideal Christmas gift for my engineer Olof:  a slide rule.  I’d like to report that it is being lovingly slid on a daily basis.  Who knew there were so many uses for a logarithmic scale? [Jan. 20, 2019] [It was a never-used personalized high school graduation gift from 1949 sold on eBay by the now-deceased recipient’s estate.]

I think I can sum up my husband, Olof’s, and my different styles by the funeral instructions our estate attorney had us write when he set up our trusts.  Mine went on for three pages.  Olof’s were all of six words: “I don’t care. I’ll be dead.”  [Jan. 10, 2013]

It’s been my observation over 11 years and nearly 400 columns that I always get the most response when I write about dogs or my husband, Olof. Olof is trying not take this personally. [Oct. 21, 2020]

Forget iPhones, iPods, iPads and Wii. My husband and I agree that no techno gismo ever invented compares to GPS.  But then, we’re not called the Bobbsey Twins of Directional Disability for nothing. [Feb.11, 2010

Last year, my husband took a trip with four fellow-physics-major college roommates that as basically a geek fest tour of the Pacific Northwest.  They took in the Boeing factory, then Reactor B, and apparently got positively misty-eyed at the Laser Interferometer Gravitational-Wave Observatory in Hanford. The only people who had more fun than they did were their wives who didn't have to go.  [Sept. 5, 2019]

Before my engineer husband tries to explain anything technical to me, he says, “I think you might want to get the yellow pad.”  He, of course, means an 8x11 lined legal pad which we buy by the kilo, since he also asserts that when I die, he’s going to insert a multi-pack of them into my coffin for my use in the hereafter. In his dream of the hereafter, somebody else is helping me with my technical problems who is not him.  [Dec. 13, 2012]

A now a favorite one about a different husband:

My expat friend Julia had to go out of town for several weeks on a family emergency and was surprised to return and find a veritable mountain of laundry waiting for her. She'd expected laundry, of course, but commented that she had never realized that her husband Fred owned so many clothes. Turned out that when she left, he hadn't. But as he ran out of clean clothes, he just kept buying more.  Weeks of more. [May 31, 2012] 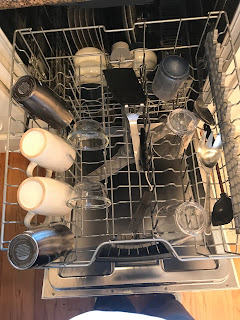 I loved that my husband was willing to take over the dishes after he retired, but he runs the machine a quarter full.  Makes me crazy! (Column April 18, 2019)
Posted by Inga at 11:10 AM