This fall will commence my fourteenth year of writing “Let Inga Tell You.”  It’s been the best retirement gig ever. I’ve covered a lot of topics, some of them repeatedly: technology, kids, husbands, rats, weight, parking, appliances, Covid, and a host of La Jolla-centric issues.  Over the next few columns, I am going to re-cap some of my favorite leads from the time I started this column. Last week, I covered Husbands (particularly Olof). This week we’ll cover Kids (my older son (the irrepressible adopted Rory) and my younger son, Henry), single parenthood, grandkids and pets.

When I became single after my divorce, it was a sobering thought that if I wasn’t murdered on any given night, it was only because no one felt like it.  [Sept. 29, 2021]

There are times when you just have to lie.  All right, I can hear my many lovely devout friends shaking their heads and saying, “No, it is NEVER okay to lie.”   So let this be my mea culpa:  I lied. But if I hadn’t lied, I’d probably still have a dead possum in my front yard.  [Dec. 2, 2010]

My husband has always maintained that I married him for his skills with a sewer augur, but that’s only partially true.  [March 11, 2010] (Rory loved flushing myriad objects down the toilet so he could watch it overflow.)

A few months ago, I wrote two columns regaling my readers with stories about how my older son, Rory, managed to terrorize me repeatedly by re-enacting scenes from horror movies he’d been allowed to watch at his father’s.  I personally think my ex hoped I would suffer a heart attack and die, thereby absolving him from further child support payments.  He denies this. [Nov. 18, 2020]

Every teenager at some point ponders the question, “Just how stupid ARE my parents?”  [June 6, 2013]

I get that teenager sons need to separate from their mothers. But do they have to be so mean about it?   [April 13, 2014]

Of all the fantasies one has as a new mom, one never imagines that some day that adorable blob will be assigned to write a paper for his abnormal psychology class analyzing the psychopathology of someone he knows well.  And choose you. [Nov.4, 2010]

Recently, we spent four days in L.A. babysitting our grandchildren – 5, 4, and 14 months – paroling our son and daughter-in-law for a much-needed get-away.  Overall it went well. There were, however, three heart-stopping episodes but fortunately nothing that could not be resolved by either (1) acetone (2) phenobarbital or (3) the realization that the house wasn’t on fire after all. [Sept. 10, 2015]

I was thinking about writing a guide on how to be a good mother-in-law but truthfully it can all be summed up in two words: “Shut. Up.”  [May 9, 2013]

Preschool is a whole new world since my sons went. Two of my grandchildren go to a preschool in L.A. that is not only rabidly environmentally-conscious but also has a zero tolerance policy for sugar (bad for you) and nuts (someone could be allergic) on school grounds. (Knives would probably be OK.)   [May 11, 2016]

I’ve finally come to understand the basic connection between grandparents and tiny grandchildren: diapers. They really want to get out of them, and we fervently hope never to get into them.  [July 10, 2014]

At my granddaughter’s first birthday, her mother tore off a small piece of the baby-sized chocolate cake and gave it to her.  My granddaughter ignored it, picked up the cake itself, and buried her face in it. I knew absolutely at that moment that my genes had been thrown forward. [Oct. 11, 2018]

A few years back when I wrote about our birds, I cautioned that one should never let kids get a pet with a longer life expectancy than yours. I really, really mean it. [October 16, 2014]

Call me naïve, but I really thought neutering a dog was supposed to make him, well, uninterested.  But even after Winston went under the knife, there would be the odd occasion when we’d be having a dinner party on our patio and a guest would suddenly exhibit a certain telltale twitching indicating to us that Winston was under the table having a close encounter of the interspecies kind. [March 2, 2016] 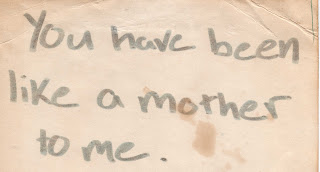