The Amazing Secret Life Of Crows

It’s officially spring if the crows are back. Besides their tail shapes, you can tell they’re crows and not ravens because they travel in groups (as opposed to ravens which travel in pairs) and like to make a lot of noise starting at 5 a.m. I’m tempted to stick my head out the back door and yell, “Excuse me! Do you have any idea what TIME it is?”

I’m not clear why we have larger crow populations every year now when we used to hardly see them at all.  They enjoy congregating on our power lines. Somehow they’ve figured out the right ones. (The ones who didn’t obviously failed to put their genes forward.) Their fondness for extracting insects from our front lawn suggests that we have inadvertently provided them with an ample food supply.  But it’s not like they’re all that picky.

Crows are reported to eat over 1,000 food items including “carrion, fried chicken, hamburgers, Chinese food, French fries and human vomit.”  I confess I was intrigued by the order on this list. Intentional?  In a study by someone who clearly has too much time (or money) on their hands, crows were found to prefer French fries in a McDonald’s bag over those in a brown paper bag. This is something that McDonalds should work into their advertising. (“More species prefer McDonalds than any other brand!”)

While it sounds like crows are just sitting up in our trees endlessly cawing, crows apparently have a very intricate system of communication, and a wide variety of vocalizations. But what is truly fascinating about them is that they are the only species of bird that is known to make and use tools.  They will select specific types of twigs to burrow into trees to get insects that their beaks can’t reach.

Crows will chase sparrows into buildings to stun them (before making them an avian lunch).  They’ve been known to drop walnuts on the road so that cars will run over them and crack the shells.  I think you’d have to pick your road pretty carefully to find one with enough traffic that you’re not just sitting around on your branch for hours bored out of your beak, but doesn’t have so much traffic that it’ll turn you into road kill when you go to collect it.

Other interesting crow behaviors include moistening hard foods in bird baths or other water sources to soften it. (We see this all the time in our fountain.) Some scientists theorize they’re washing it but as a strictly non-scientist observation, any species that eats carrion and human vomit is probably not all that big on sanitation.

Crows mate for life but males will cheat. (Is this sounding familiar?) It’s actually pretty amazing considering that male crows have no penis. The male crow’s sperm is transferred from their cloaca (a cavity at the end of the digestive tract) to the female’s cloaca in an act that lasts all of 15 seconds.  Definitely short on the foreplay.

Once crows have mated, they no longer demonstrate courtship displays. Is that sounding familiar too? What’s the point of bringing her a nice piece of cow dung if she’s already committed?

If the male crow is non-fatally injured, his mate won’t leave him, although reproduction apparently drops waaay down. I’m thinking it would be hard to notice the difference if all you ever got was 15 seconds to begin with. Female crows seem to have very low expectations.

Moving right along, the expression “eat crow” – i.e. having to admit to a humiliating mistake – suggests that crows themselves are not good eats. Others say they taste like chicken. (Joke.) Regardless, given that they are scavengers, there is an inherent aversion to essentially eating what the crows themselves have eaten.  One website noted that one crow “will feed two people who don’t know what they’re eating or 12 people who do.”

Finally, groups of creatures are known by collective nouns, like a gaggle of geese, a pride of lions, an exaltation of larks, a school of fish…and a murder of crows.  Apparently the term came about during an era where groupings of animals had colorful and poetic names.  Scientists, always so unimaginative, apparently just refer to a group of crows as a flock.

Now that I know more about our seasonal avian friends, I’ve enjoyed observing their behavior. There are a lot of mature trees both on and around our property and it is my observation that these guys are pretty territorial about which branch belongs to whom. Watching this from the safety of my deck chair, groups of crows look like avian F-4s engaged in dog (er, crow) fights. Our cars have been underneath some of these battles, as have our brick walkways. I just try to keep my head from being a target. I’m abundantly clear they’re smart enough to get me if they wanted to. 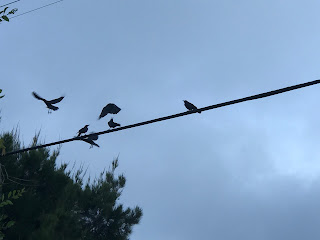