OK, let’s settle this parking issue once and for all.

There have been numerous articles recently citing “consultants” from a local parking lot company maintaining that there is plenty of parking “at all times” in the downtown area of La Jolla, a.k.a The Village. First of all, this guy has never visited La Jolla in August. There is no parking anywhere in the Village even if you wanted to use their extortionist lots.

As for the rest of the year, there are allegations that there are plenty of parking structure and off-street spaces if the local denizens weren’t too cheap to pay for them.  Well, OK, we ARE too cheap to pay for them unless absolutely required, but that’s the least of  it.  (Someone will write to me and point out how much more expensive parking is in other cities.  Please save yourself the trouble.)

So here are the issues.  A lot of people – I would be among them - really hate parking structures. It doesn’t matter what time you get there but if it’s a high rise, like, for example, the one at the Ximed building at Scripps Memorial, there will only be parking on the roof by 9:30 a.m.  If it’s subterranean, like most of the ones in La Jolla, the only spots will be at the very bottom.  Level P4 will be reminiscent of descending into the Fourth Circle of Hell, an image eerily reinforced by the fact that was one is indeed circling ever downward.

Subterranean parking structures are dark, sky-challenged, and creepy, and the stalls are really tight, even for persons such as me who own a compact car. They are populated with large pillars, strategically designed to be backed into. Black SUVS will be parked on either side of you in spaces marked “small cars.”  There is rarely (never?) angled parking. The dim light doesn’t help us oldies, whose depth perception isn’t what it used to be, try to inch out of a space keeping track of both sides of the car AND that pillar behind you.  My last foray into a parking structure ended with my bumper having an encounter of the paint-removing kind.

Another major problem with parking structures is that they involve machines. If you have trouble operating your cell phone, ticket machines are likely going to present a problem for you, and not just because you have to get out of your car to get the ticket which was maliciously placed 1.5 inches from your farthest reach. (Idea for next elementary school Invention Convention: a little robotic arm that senses the car and delivers the ticket to you no matter how far away you are. My kids would have killed for an idea like this.)

A friend recently mentioned that she would never risk parking in subterranean lots in case of an earthquake.  Just not willing to play Richter Roulette.

So I ask you:  Is it unreasonable to want to park on terra firma?

But alas, even the street-level paid lots are fraught with obstacles toward the techno-impaired.  It’s one thing to have to stuff money into a too-small slot that corresponds with your stall number.  But those have mostly disappeared and been replaced with requirements that one text a number or download an app.  Seriously?  You lost me at “app”.  And probably at “text” too.  I text but I don’t keep any financial information on my phone so how am I going to pay for anything with it? And now some of the lots confront you with what appears to be a Rorschach blot on steroids presumably in anticipation of inter-galactic visitors. (My husband says they are called “3-D bar codes.”)

The clincher is that on the lot in the photo, after you do all that texting and apping, they’re charging a flat fee of $10!  Hey, I just wanted to pick up some drain cleaner at Meanley’s!

All those intimidating paid lots just take so much time! And stress! And make you feel stupid! And require your bumper to be repainted!  So if you could park in a nice free angled street spot in visible daylight instead 80 feet above ground or somewhere approaching Middle Earth, which would you pick? 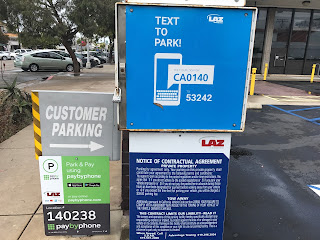 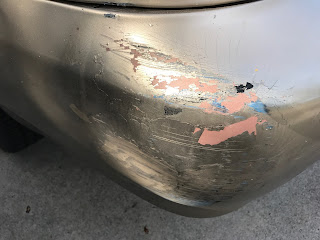 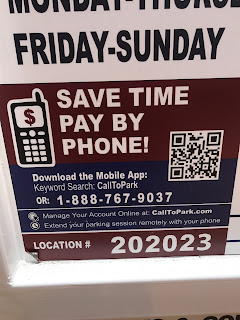