For The Love Of Pets

For the 12 years I was a divorced working parent, we lived paycheck to paycheck.  It was a good thing that my younger son was allergic to animal dander because we could never have afforded a dog or cat, even to feed them, never mind shots or grooming or God forbid, if the animal got sick.  Instead we had Dinky, a cockatiel.

Birds tend to be low cost pets – just a cage, seed, some toys. Dinky was truly a member of the family, feeding our souls as we all healed from the trauma of divorce. While he had a cage, he was rarely in it unless we weren’t home, instead riding around on someone’s shoulder or head.  He recognized our voices, our footsteps coming up the walk, and the sound of my car engine.  He even ate at the table with us, albeit a little nervously when poultry was served.  We were all hugely attached to this little bird who had so much personality and brought us all so much daily joy.

It was Rory who first noticed that Dinky was listless and not eating, sitting on his perch fluffing up his feathers. I had yet to learn that birds are really hard to save; they have to look good even if they’re ailing to survive in the wild. By the time they look bad, they’re pretty much on their way out.  The kids were absolutely weepy.  (I was too.)  Dinky won’t die, will he Mom? Can we take him to the birdie doctor?

Few vets treat birds so I was finally referred to a specialty veterinary hospital.  They said that to do diagnostics and treat Dinky would cost $600 up front, regardless of the outcome.  I was distraught.  When you take home $1,500 a month, $600 means a lot of months of spaghetti. I had always been careful not to run up credit card debt. The only alternative was to take Dinky home and pray for a miracle.

From the vet’s office, I called Olof in San Jose with my phone card. We were dating then, in a commuter relationship.  As he listened compassionately, I sobbed into the phone about how this really wasn’t even a choice given my financial situation.  Finally, he said gently, “I think you know what you need to do.”  I blubbered to the affirmative. Not that I did it. Three minutes later I had handed over my credit card for the $600, and the bird, after some pricey blood tests, died in the x-ray machine an hour later.

The reality is that pets are expensive.  No one ever adopts an animal thinking that they will develop a catastrophic medical condition.

People might say, “well, you should have gotten medical insurance for your dog or cat.”  Pet insurance isn’t all that cheap either, and we found with Winston, our much-missed English bulldog, that our pet insurance didn’t cover conditions that were endemic to the breed.  Which in bulldogs is pretty much everything.  Our vet said that during her training they had a bumper sticker that read “Buy a bulldog. Support a vet.”  We were fortunate to be able to cover the $7,000 in medical bills for Winston before he died suddenly of a heart attack in our living room at the age of eight.

Fortunately, there is a local organization that helps people who would have to euthanize a pet with a catastrophic medical condition because of an inability to pay.  It’s called FACE (The Foundation for Animal Care and Education.) Over 2,300 pets have been saved through the program since its inception in 2006. This year’s FACE fundraising event, Paws and Pints, sponsored by La Jolla Veterinary Hospital, already took place on June 6 but it’s never too late to donate to this worthy cause (www.face4pets.org).

The FACE program started decades after Dinky who I think was probably unsavable. But the feeling of being unable to save a beloved fur, er, feathered child because of the cost still sticks with me 30-some years later.  I still cry when I think of Dinky.

While medical care for your pet can really add up, here’s something that isn’t expensive:  a collar and tag. At least a few times a month, I encounter an animal – usually a dog, but sometimes a cat, and occasionally even a chicken – who has escaped from its home. A surprising number have no tags. And, when taken to a local vet, aren’t chipped either. (Can you chip a chicken?) Aside from a fear that these poor animals will be hit by cars in our neighborhood’s fast-moving traffic, I’m afraid those anonymous roaming canines will eat the untaggable escapee chickens. 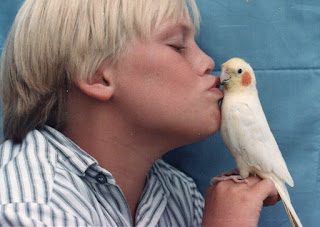