Hardly a day goes by that some on-line platform or even print media doesn’t publish an article about how to deal with digital addiction.  Apparently it now afflicts tens of millions of people who literally are unable to wrest themselves from constant infusions of Facebook, Twitter, Instagram, texting, email, and something called streaming.

Nobody should make fun of other people’s addictions. I have long admitted to a serious addiction to chocolate and have the thighs to prove it.   But no one actually wrenches chocolate out of my hands (even if maybe they should). So I’m trying to be tolerant of the national techno addiction despite the fact that I (mostly) can’t understand the appeal of digital applications in the first place.  And it’s not just because Siri and I have always had a really contentious relationship.

I say “mostly” because I will confess to following one person on Instagram – my daughter-in-law.  And that is because she posts grandchildren photos and short videos on it.  This is like grandma crack.

And OK, I love the FaceTime feature on my phone for this reason as well.  My four-year-old grandson will sometimes FaceTime me eight times in a single day.  I’m not sure that he’s all that excited about talking to me but he loves being able to push the FaceTime app on his mom’s phone and then selecting my name or picture.  The fact that I instantly appear is immediately reinforcing, even if his main goal is to hang up and do it again.

But Twitter?  I just don’t get Twitter. Does anyone ever say anything nice on this app? All that bandwidth just to hurl around misspelled vitriol.

I guess that’s my biggest complaint about it all this digitality: it’s just so much noise.  As soon as you order something on-line, you’re inundated with daily emails plugging their products even if you specifically unchecked the box about future emails.  As for “Unsubscribe,” it’s amazing how often clicking “Unsubscribe” doesn’t do that.
As much of a techno moron as I am, I’ve developed excellent skills at using NoMoRobo on Spectrum and at blocking calls on my iPhone from those pesky resort sales people who seem to have at least 400 numbers. Yet I still get inundated with unwanted calls and emails.

Of course, a lot of the failure to understand digital appeal is a generational thing.  I personally need the comforting crinkle of a newspaper, and the tactile satisfaction of actually turning a page in a book.  I never have to recharge the pile of books on my bedside.  (OK, I do feel bad about the trees.)

I’m truly dreading the presidential election next year since the robocall rules don’t apply. In preparation for the 2016 election, I changed my affiliation from Democrat to “Decline to State” but was unable to convince Olof to formally ditch the Republicans even though he hasn’t voted for them in years. He still has hope they will return to what he thinks is their former glory. (Hah!) So, in retaliation, I love to play with all the relentless Republican fundraisers who think they’re calling a friendly number only to get me.  “Do you think that marriage should be between one man and one woman?” they’ll query when I pick up the phone. “HELL NO!” I’ll yell before summarily disconnecting.  It’s so satisfying.

That people, even whole families, are now resorting to solutions like “digital Sabbaths” or even “digital detox” is an alarming symptom.  I could help them by having them come to my house where phones are strictly forbidden at the table every day of the week. (I give people on the transplant list a pass.)

I think the phrase that perfectly sums up digital addiction is the ubiquitous “I have to take this” (call).  No, you really don’t.  There’s this amazing modern invention called “voice mail” and it is particularly suited to, say, the symphony, a doctor’s office, and yes, lunch with your formerly-adoring friends.

I think the most heartbreaking symptom of techno-addiction I see is Moms walking their kids home from school with the child trailing ten feet behind while Mom scrolls on her phone.  It’s all I can do not to say something. Like, YOU HAD ALL DAY! PLEASE TALK TO YOUR KID!

The author Jenny Odell writes in her new book, “How to Do Nothing: Resisting the Attention Economy” that there is nothing harder to do than nothing.  Once again, it must be a generational thing. And a cultural thing too.  The Italians have long mastered “L’arte di non fare niente” (the art of doing nothing.)  But definitely not a younger, American thing.

Personally, I can’t understand why anyone wants to live glued to an electronic device.  There’s no doubt that it really is a societal addiction.

But just so we’re clear:  Leave my chocolate alone. 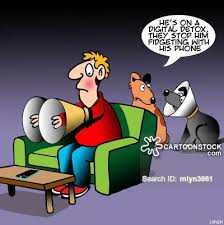 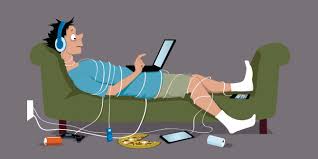 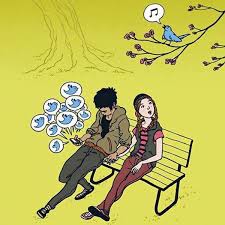 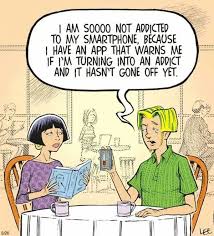 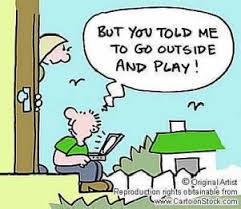