There is nothing more fun for me than to watch my engineer husband, Olof, develop a passion for a project.  Six years ago, I won a first place Press Club award for a column entitled “How an engineer makes cookies.”  My husband, who had never baked anything in his life, decided to replicate the family Christmas cookie recipes from his childhood which were a tad vague on the details and did not indicate yields.  Olof wanted to make enough to send to family and to give to neighbors.

I was utterly dazzled watching this entire production, which involved five spreadsheets, multiple flow charts, and headings like “Integration of Components.”  The nice thing about not having baked before is that you’re not constrained by actual baking terms.

The yield problem was solved with astonishing accuracy by what Olof referred to as “a simple application of undergraduate quantitative analysis.” Who knew a degree in nuclear physics could have such practical applications?

Einstein didn’t put as much energy into developing the theory of relativity as Olof did watching sourdough starter videos.  You would be amazed at how many You Tube videos there are on this subject. I can assure you that Olof has seen them all.

Of course, guys in general, and engineers in particular, are always looking for excuses to buy “toys”, for example the Ferrari of stand mixers he required for the cookie caper a few years back. (Fortunately, he hasn’t been all that into the meat grinder attachment.)  The sourdough project, however, has required the acquisition of such accoutrements as bannetons (rattan baskets for proofing bread), bread lame (dough cutting tool), precision food scale to measure everything in grams, and even a special heating pad meant for seedlings that Olof uses to control the heat under the starter jars.  (Someone had one on their video so Olof had to have one too.) I predicted it would be the most time-consuming and most expensive loaf of sourdough bread in history.

Given that there were multiple recipes for sourdough starter, Olof decided it would be necessary to try several and then compare the final results when they were in bread form. One starter had a base of honey, raisins, water and sugar.  Another of pineapple juice.  Every jar is carefully labeled including tare (the weight of the jar itself).  The different starters have to be “fed” at precision schedules with flour and water.  Dinner has been preempted on numerous occasions in favor of feeding the starters rather than ourselves.

Lest there be any confusion as to which recipes prevailed, Olof has created notebooks tracking every single teeny step-let in the creation of each of his starters. They read like the logbooks on the Starship Enterprise. Some excerpts:

2:20: CB out and cooling. Maybe over stretched. Too thin in middle and fat at the ends.

While Olof has now done three full bakings of sourdough boules and one of ciabattas, he still has not been able to achieve the nice big bubble holes in the bread that would indicate a truly primo loaf of sourdough.  He is still assessing why. Did he overwork the dough? Was the starter not active enough? Did the flour not absorb the water as well as it should have?  Inquiring minds are definitely going to find out.

Let me just say that the taste is amazing, regardless. It definitely has a denser more rustic consistency than the light fluffy sourdoughs you buy in the store.  Our refrigerator will likely have a permanent section for sourdough starter jars.

Not to ruin the surprise, but I think everyone in the family can guess what they’re getting for Christmas. 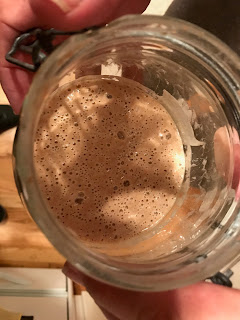 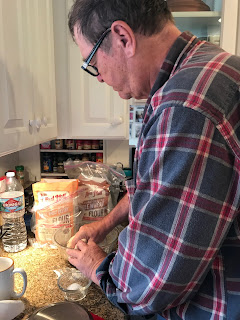 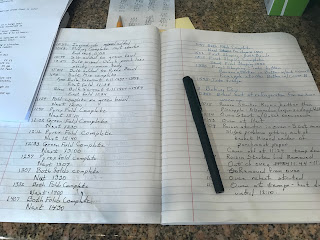 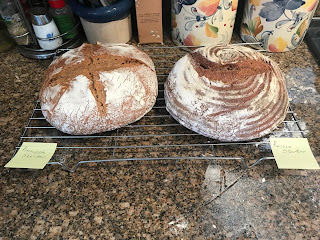 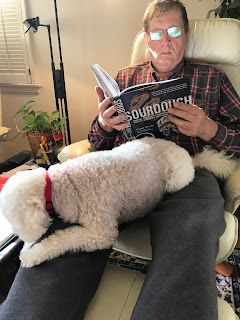 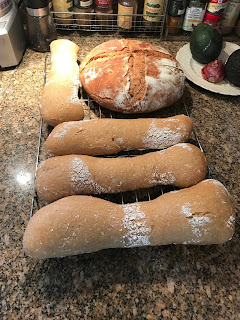