It’s really easy to put your head in the sand about getting old and decrepit until you start hearing about friends’ parents, and even the friends themselves, requiring 24-hour care.  As in forever.

So Olof and I decided that maybe we should look into long-term care insurance.  Let me sum up the concept: they hope you pay exorbitant premiums for 20 years then die of a heart attack.

Olof was out of town when the long-term care people called in response to my application and said they were sending a nurse out for a physical exam, including a cognitive evaluation.

Uh-oh. I do the New York Times crossword puzzle every day (except Monday; too easy) and read three books a week. But I’m clear that my mind is not as sharp as it once was.  The Light will testify that my proofreading skills have gone to hell.  I mis-use words a lot more.  When I’m writing, I’ll ask myself, “Do I mean ‘propitious’ or “prophetic’?”  I’m not so sure of spelling anymore.  I have to look up grammar rules regularly.

As we get older, Olof and I are hoping that together, we can maintain one complete brain and one functioning body between us.  Especially one semi-complete long-term memory bank.  We’re always asking each other: What was the name of the actor in…

What’s scary, however, is that I sometimes temporarily lose a really basic word.

Inga: “Olof, what’s the word for those things you put on your feet inside your shoes?”

There was a time when one of us querying the other as to whether they’d remembered to take out the dog or turn down the heat before bed would have suggested a mildly insulting lack of faith in the other’s mental prowess.  But now we’re in total agreement that we have no faith in either our own or the other’s mental prowess.  We’re just trying to keep the dog from peeing on the carpet and the heating bill under control.  We’re grateful for the reminder.

The problem will be when neither of us remembers to either ask or do it.  Or remembers that we even have a dog. Or heat.

Fortunately that day is not here yet.

But having the long-term health care insurance evaluator come out unnerved me.  I knew I could chug an extra blood pressure pill a few hours before she got there, but what was a “cognitive evaluation” going to actually entail?  If they asked me to count back by 7’s or do a level one (easiest) Sudoku puzzle, I’d be toast.

I decided to do a little home staging before she came, carelessly strewing around collections of New York Times Saturday crossword puzzles (the really hard ones, NOT the Sunday), a few books in Swedish, an assortment of green teas. I wanted to create a subconscious impression of someone who dwells among the cognitive-scenti, the kind of person for whom an evaluator would say, “Oh, we  obviously don’t need to be testing YOU.”

But she didn’t buy it. The cognitive exam, alas, was even worse than I expected. She told me she was going to tell me ten words and ask me to repeat back as many as I could remember a half hour later.  (Would two be enough?) I explained to the nice lady that I am afflicted with Auditory Processing Disorder (really) and learn better visually. Could I see the words instead? Nope.

Um, doesn’t this violate the Americans with Disabilities Act?  If people can get more time on their SATs, shouldn’t I be entitled to accommodations on a dementia exam?

After she told me the words, giving me as much time as I needed to try to process them, she chatted it up with me about my current health and level of functioning.  (Inquiring minds want to know: Since when did “toileting” become a verb? Actually, when did it become a word?)

She had been deliberately vague about the costs of the insurance, noting that it would greatly depend on what type of coverage I might choose, and for how long I might want it.  Apparently, long term care can be pretty short term.  When I balked at the cost, she handed me a price sheet showing all the local memory care facilities costing anywhere from $8,000-$12,000 a MONTH.  And no, Medicare doesn’t pay.

Against all odds, I actually was able to come up with nine of the ten words after the required 30-minute lag. Years ago, I learned that if I can’t write something down, I project it up on a pretend screen in front of me so I can see it.

By the way, the words were chimney, salt, button, train, harp, meadow, finger, flower, book, and rug.  (The one I couldn’t remember was meadow.)

Write these down.  You may get the same lady. 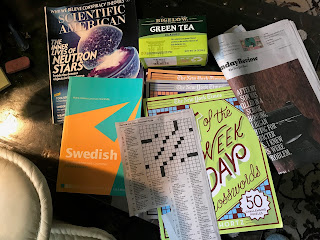 I did a little home staging before the cognitive evaluator
came hoping she would conclude I was not a person in
need of testing.  (She didn't buy it.)