The hysterical call came in at 9:30 one night.  A care giver at the home of a disabled friend was on the other end, so distressed that I could only assume that her client had shuffled off this mortal coil.  But it was worse than that.

There was a rat in the kitchen.

Now let me just say that I can provide no corroborating evidence that this creature was, in fact, a rat and not, say, a field mouse. In every description of the sum-total two (alleged) sightings of this animal, his dimensions have increased, currently assuming the size of a small dog.

Hoping to defuse the situation and to allow us to discuss the situation without using the inflammatory “r” word, I named him Bruce.

Now, I know that most people are not terribly fond of rodents. The exception would be my dear friend Carol who had a beloved white rat named Snowball.  When Carol went through a horrible divorce, Snowball would lick the tears off her face at night as she sobbed into her pillow. One can never underestimate the power of pets to sustain people in times of sorrow.

One night last year, I opened my door to find Carol at my doorstep in abject distress. Snowball had been diagnosed with breast cancer. We’ll leave aside the obvious questions as to who treats pet rats (I have enough trouble finding vets for our birds) and how this diagnosis might have been made.  Routine mammogram? Self-exam?

As anyone with a pet knows, there is virtually no medical treatment for a human that cannot now be done for an animal.  So the rodent vet had offered a comprehensive treatment plan. It wouldn’t be cheap. But none of that matters to those of us who are faced with losing a beloved family pet.

Bruce, of course, was not a pet.  More in the “scourge” category.  My personal theory was that Bruce had been looking for a warm dry place to come in out of the week’s torrential rains and had been pleased to find a ready-made fruit bowl banquet on the kitchen counter.

Alas, it looked like the care givers might actually quit over Bruce. They had barricaded the kitchen closed from both sides, stuffing towels under the doors, refusing to enter, and were ordering take-out.

My first suggestion, of course, was to remove the Bruce Buffet from the counter and put it in the fridge.  The next morning – Valentine’s Day – I braved the record-breaking deluge through flooded streets and broken traffic lights to acquire kid-and-pet-safe bait traps at the hardware store and deliver them to our friend’s home.  I then called six different pest control places, none of whom could come until the next week and none of whom were willing to just trap one creature.

The care giver thought that Bruce might have entered through a hole in a cabinet vent which she maintained should be immediately plugged up by someone other than her. She then thankfully ended her shift and fled the house. But her replacement was even more rodent phobic than she.  Not gonna work in a house with a rat.

Given that Bruce’s demise had to be hurried along, I called Olof who came over with our should-be-patented kit we’ve affectionately dubbed Furry Varmint Demise: finger-breaking rat spring traps, peanut butter (rat food of choice), cheese cloth (to wrap the peanut butter in), and Brillo pads to stuff in places where you think the rats might be entering (Single Woman Home Repair School hint).

We carefully slid the baited spring traps underneath shelves where they would be heard but not seen if they went off.  We advised the care givers that we did not provide Deceased Rodential Retrieval Services between 7 p.m. and 8 a.m.

I also acquired some sealed plastic containers that could store food items that needed to be left on the counter to ripen.  I failed to mention that any self-respecting rat could chew through them if sufficiently motivated.  Sometimes illusion is as important as reality.  Getting the care givers back in the kitchen was imperative.

Days went by and no more signs of Bruce. Tentative activity resumed in our friend’s kitchen. Olof and I began to wonder if this could be a new retiree cottage industry for us.

As for Snowball, I was at the grocery store one afternoon some months ago when I got a call from Carol.  She weepily reported she was in the vet’s waiting room waiting to have Snowball put down.  The treatment plan would likely cause Snowball considerable discomfort with no guarantee of appreciably extending her life. A rat’s average life span is only two years and Snowball’s date of birth was unknown.

We cried over a memorial bottle of wine later that evening. And yes, it was really sad.

Sorry, Bruce.  It all comes down to being invited. 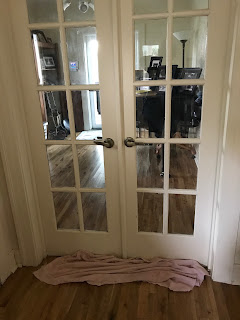