When we take Lily out for a walk, there are certain places she sniffs and others where she sniffs but also pees.  It took me a while, but I’ve now broken the code: this is social media for dogs.

Each time she stops and sniffs, she’s reading the messages left by her canine counterparts.  And sometimes she feels compelled to, er, post a reply.

Should we be honored that every dog who walks by pees in front of our gate?  Does this mean Lily has 400 SnoutFace friends?

It’s really gotten to be a problem.  We are serious dog people but stepping over a lake of dog effluvia every morning can be dismaying.  It is ever more dismaying when we actually step IN it.  So a non-toxic but unpleasant (to dogs) spray was recommended to us to discourage this practice.

Now that I understand the whole social media aspect of it, I’m feeling bad about using that spray.  Is this like unfriending her canine pals?  If she could speak, would she be saying, “Mom! Dad! You’re, like, ruining my life!  Now Woofgang Etzler and Fluffy Feinbaum ignore me on the bike path! And who knows what they’re posting about me on the agapanthus in front of the Hinkelmans?

Alas, Lily is not usually part of these charming gatherings.  Lily is leash aggressive.  Which is to say that as soon as you exit the yard with her on a leash, she comes Cujo in the presence of other dogs.  Yet as soon as another dog is in our yard and there’s no leashes, she and the visitor are new best friends.  It is so odd for a dog who is otherwise calm and sociable.  When we have guests, she makes the rounds of everyone’s laps.

Occasionally she seems really interested in interacting with another dog while on a walk, and pulls on her leash toward them, her tail going at 100 wags a minute. If the other owner agrees, I’ll let Lily cautiously approach the other dog who is usually one of those mild-mannered animals who must do the doggy version of transcendental meditation; it is quintessentially calm.  Those interactions always go well.  Everybody sniffs then you can see the other dog going, “Oh, it’s you, Lily.  So about that nasty stuff your parents spray in front of your gate…”

I am truly fascinated not only with canine communication skills with each other but their skills with humans. Dogs truly excel at conveying their emotions. Would that people were so easy to read.  A friend sent a photo of her dog Ingy who had just had ACL surgery. The dog was plotzed on the sofa, one leg thoroughly bandaged, and definitely benched for the foreseeable future. That face! Who needs words?

Indeed, anyone who has ever had a dog as a family member is impressed with how truly evolved dogs are.  Then they go and roll in their own poop and, well, you just have to deduct a few points.

Lily, like all dogs, has her own repertoire of faces.  The ears-folded-back plaintive look that says “You’re really going to eat that burger in front of me?”  The ears-straight-up full-attention look when our new washing machine is running (we’re both terrified of it).  The cartwheels she does when we walk in the door. She’s never lost her shelter dog abandonment issues. If we go out for a half hour, you’d think we’d abandoned her for weeks.  She leaps into my lap and slathers my face in a frenzied doggie saliva facial. “You’re back! I thought you were gone forever! Never do that to me again!”

When Olof was in the hospital last year, she pooped on the floor until he came back. How much clearer can you get?

And let’s not forget “dogar.” A dog can hear the sound of the fridge opening and the crinkle of a package of cheddar cheese no matter where she is in the house or how loud the TV is.

Well, now that I understand the whole social media aspect of sniffing and selectively peeing, I’m probably going to cut back on that spray stuff by the gate.  Maybe give Lily a little time to build up her friend base again. See if Atilla and Sparkles and Hairy Pawter and Orville Redenbarker will start leaving her messages again.  I just hope she appreciates our sacrifice. Really hard to imagine this dog as Cujo 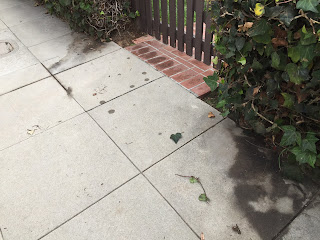