It’s ironic that only two weeks ago I wrote a column that included the saga of the death of a friend’s pet white rat, Snowball.  When I wrote about the loss of our beloved bull dog, Winston, in 2016 there was an outpouring of support from readers who had been equally flattened by the loss of a fur family member, canine or feline.

One reader lamented, however, that she felt that no one seemed to understand her grief at the passing of her iguana, Ziggy Marley.  And certainly my friend was not being overwhelmed with the condolence cards over Snowball.  Some types of pets simply resonate more than others. We’ve noticed this with our birds as well.

Our avian saga started when my older son, Rory, then nine, talked me into a cockatiel. It was such a simple request. Sure, I said blithely, you can have a cockatiel. Who knew what far reaching ramifications that simple line would have. What I didn’t know I was really saying was, “Sure. I’d be glad to clean bird cages for the next TWENTY-SEVEN YEARS.”

A few years back when I wrote about our birds, I cautioned that one should never let kids get a pet with a longer life expectancy than yours.

Rory is now 41 and married to a cat person in Santa Cruz.  While cockatiels can live to 30 years (and ours seemed destined to), it’s the children and grandchildren of the originals who hung in there with us over the years. We also became an inadvertent avian social service agency for parakeets as neighborhood kids bought them as pets then quickly became bored with them. It was not unheard of to find an abandoned cage with a bird – no note – on our front doorstep.

With a burgeoning bird population, we had a 4’ x 4’ by 6’ high cage built into our protected back porch and moved the birds outside one summer so they had time to acclimate to the weather. The nice thing about an outdoor aviary is that it didn’t have to be cleaned daily. Still, they could cover a cage floor pretty fast.

When he retired, Olof took over cleaning the aviary on Sunday mornings.  Even he conceded that after 27 years of cleaning bird cages, I probably deserved a break.

Our young grandkids love the aviary and our granddaughter especially loves naming the birds when new ones show up. By 2015, all the cockatiels had passed away and we were down to two pairs of parakeets, Banana and Green Bean (who were, not surprisingly, yellow and green respectively), and two blue ones, Elizabeth and Oreo.  We never quite got what inspired our granddaughter to name a blue bird for a brown and white cookie, but hey, her choice.

As with all our birds over the years, we are hugely fond of the little guys. They’re truly family. We enjoy listening to their morning chirp-a-thon. They recognize our voices, and even our footsteps and car engines. They flock to the front of the cage in the morning when Olof comes out to uncover them and feed them. And we have mourned the loss of every one of them.

Grieving a beloved pet more than some human family members is not unusual, whether the pet is a white rat, an iguana, or a bird. Frankly, I have several relatives I would have happily traded in for Winston.

This past week, Olof found himself having to report some very sad news to our granddaughter:

I'm saddened to report that Oreo, the beautiful blue parakeet in our cage, has gone from this world, flying over the rainbow to wherever birds go.  This morning, I found the blue feather shirt, beak, and claws he left behind still and quiet at the bottom of the cage.

Oreo was the oldest bird in the aviary.  He came to us at the same time as Elizabeth and they were a pair.  When she died many months ago, poor old Oreo was set adrift.  Green Bean and Banana tolerated him, but he was always a little outside their orbit.

This time of year is the hardest for our birds.  It's cold in the cage and it's colder yet for an old bird forced to huddle by himself on a branch.  He had begun to look a little scruffy, a sure sign of a bird wearing down.  Every morning, when I uncovered the cage, he would hop to the front to find a little piece of sun to warm himself in.  Last night it was just a little too long between cold dark and warm(er) morning.

Today I imagined him in a warm, green jungle, flush with food, but devoid of cats and hawks, strutting around like his old self, squawking defiantly at everyone within range.  I hope you will too. 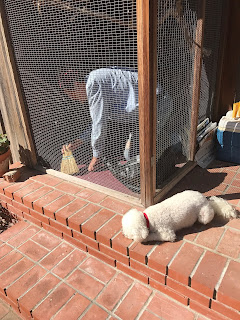 Olof cleans the aviary on Sunday mornings
while Lily supervises