Amazingly, It Wasn't A Scam

When the service garage manager told me my car failed its smog test because I don’t drive on freeways enough, I was sure I was being scammed.  I’d had this experience once before years ago at the now-defunct service station on Pearl and Eads who told me my five-year-old Camry would need $800 in repairs to pass.  Dubious, I took it to another garage and it passed without a hitch.

This time, the service manager tried to explain to me that their test machine had failed my car on something called OBDII.  As best as I could understand – and frankly, I couldn’t understand it at all – when I’d had my battery replaced 18 months earlier, it had re-set a thingamagiggy (not its technical name) that was now causing this problem.

The solution, he said, was that I needed to get the car out on the freeway and drive it around for a while (20-100 miles, he guessed) then bring it back in for a re-test. It sounded so ludicrous that I may have said unkind things.  In my mind, I could hear these guys laughing hysterically and saying, “She actually fell for it!”  I made a mental note to AARP: Alert seniors to the new Elder Battery/Smog Test Scam!

A minor detail with this solution is that I do not drive on freeways.  As in ever.  Hence, my car doesn’t either.  I was a reluctant freeway driver even before a seriously impaired driver slammed his Mercedes into our car at 85 miles per hour. A blow-out at 70 miles per hour on I-5 on Christmas Eve in 2015 clinched it.  My 6’3” husband avoids driving my car as well as no matter how low and far back the driver’s seat is set, his head is wedged against the roof.

But Olof looked up this OBDII thing and amazingly, it’s a real thing.  The internet was replete with minutely-detailed instructions on how exactly you should drive your car to fix this problem.  But being the internet, absolutely none of those instructions agreed.   It reminded me a lot of recipes for perfect popovers, none of which agree either.

But just so you don’t think I’m making this all up, Olof has complied with my request to explain it to us:

Inga, my understanding of your smog certificate fiasco follows:

As you are well aware, the state of California has grown concerned about smog, particularly in Southern California.  In response they set limits as to the amount of pollutants that a car can emit and still be licensed. Hence the requirement to periodically take your car to an inspection station and have its exhaust analyzed.

However, our government friends determined that these stations could not economically test the car in all operating modes, so they forced car manufacturers to put in sensors that measure pollutants at speeds and operating conditions that the inspection stations can't observe.  These sensors connect to an onboard computer which stores their results; probably average values for a past period of time, or perhaps the latest values.

This computer is an electronic device and needs electrical power to maintain its memory.  Normally that's not a problem as the car's battery provides more than enough power.  But you had the battery replaced which momentarily deprived the computer of power and wiped its memory clean.  This would also not normally be a problem, but the sensors aren't active at all times.  Some apparently only work in specific driving regimes (e.g. speeds above 55 mph).  Still not a problem normally because after a day or so of driving, all of those regimes should have been experienced, the sensors reactivated, and the computer updated with data.  Only neither the State of California, nor the automobile manufacturers, anticipated granny driving during which the car never exceeds 25 MPH (except on La Jolla Boulevard, where speeds have been observed which, by all rights, should have activated the sensors).

The day after you berated the poor service station guys for not being willing to violate state law, I took the car for a spin up Highway 52 and drove it around near Convoy at various speeds. This was apparently sufficient to re-enable all the sensors and cause them to once again report data to the on-board computer. The next morning the car was issued its anti-smog certificate with no problems.

OK, so Olof fixed it.  But on behalf of all the little old ladies and freeway phobics in America, I protest.  Or maybe it’s just on behalf of little old ladies and freeway phobics in California.  As the washer repair guy said about the pathetically low water levels in my new washer, “It’s a California washing machine.” I’ve already written about our California toilets, the mandated low-flow ones you have to flush six times. Now I have a California car which failed its smog test because I don’t drive on freeways enough. 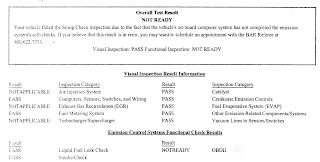