You can hardly pick up a magazine these days without reading about the Japanese uber-organizer Marie Kondo whose best-selling book about tidying advises only keeping things that “spark joy.”

Does that include husbands and children?

Now, I’m hugely happy/joyful with my second husband.  And as for the kids, they live out of town.  But should there be a new box on divorce petitions that says, “No longer sparks joy”?

Apparently, Ms. Kondo is also a precision folder of clothes,  creating perfect rectangles that stand up on edge where everything can be easily seen rather than the traditional stacking method.  I’m sure you get faster with practice, but that’s still gotta suck up a lot of time. My bigger concern:

You can fold clothes into perfect rectangles to your OCD-heart’s content. But good luck getting toddlers, teens, and even more problematic, husbands to buy into – and maintain – your work. There was nothing my kids enjoyed more as tots than throwing everything off the shelves of the changing table or sitting in their father’s sock drawer hurling socks in every direction.  If I had just spent an hour precision-folding all that stuff, I might find myself homicidally annoyed.

In fact, I still remember a day some 40 years ago that I took it upon myself to organize a whole drawer full of miscellaneous nails and screws into a plastic hardware store container with an insertable divider.  When I was done five hours later, I confess that it did spark joy.  Who knew we had so many rubber faucet washers? But if we never needed one again, we’d know just where to find it! Days later, my (now former) husband took out the box looking for a specific size nail, couldn’t get the lid closed, so he pulled out the plastic divider insert.  I mean seriously, if I could have listed that on our divorce application, I would have because I was so profoundly furious.  And that’s when I realized:  Give it up, sister.  If you want order, live alone with your cats.

The number one question that people have about Marie Kondo: does she have kids?  Well, now she does, but not when she wrote the book.  I’m guessing she has a secret folder/tidyer who works after dark.

Ms. Kondo advises that as you get rid of all that joy-less baggage in your home, you should thank it for its service. I agree that would make it emotionally easier to be a ruthless discarder but what about the discardee? “Thanks for the good times! In return, you’re going to a Goodwill bin where you will soon be worn by a homeless person!” I foresee karmic consequences.

I know that thousands (millions?) of people have bought into this whole “tidying” craze and I can definitely see the potential parallels of a tidier closet equaling a tidier mind.  Personally, however, if I met someone whose drawers all looked like the ones Marie Kondo espouses, I’d be worried there were dead people under their house.

But let’s get back to the whole concept of only keeping things, especially clothes, that “spark joy.”   I have several cashmere sweaters that truly bring me joy.  However, I can say as a 70-year-old woman that my underwear definitely does not spark joy.  But I really think I need to keep it anyway.  And even wear it.

As it turns out, this whole fanatic tidying thing has become an international fad.  The Swedes have a similar thing called “Swedish Death Cleaning” a title so characteristic of the ever-practical no-nonsense Swedes that I almost can’t bear it.  In their version, one should start giving away things in middle age not only to simplify one’s life but to not create a burden on one’s kids later. Never too early to get ready for death!

My tiny garage-less cottage could fit in the living rooms of a lot of La Jolla homes so I try to keep it as uncluttered as possible.  I just don’t have any place to store anything.  Unloading all the stuff that the kids were storing at our place for ten long years after they graduated from college probably reduced our household inventory by 50%.  And let me say, that truly WAS joyful. It was like the ultimate garage sale!  In fact, I can pretty much guarantee that no matter how successful Marie Kondo and the Swedish death-cleaning lady have been with their books, just wait for my best seller, “How to Get your Kids to Take their S—t.”  No folding required. 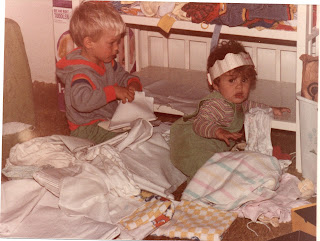 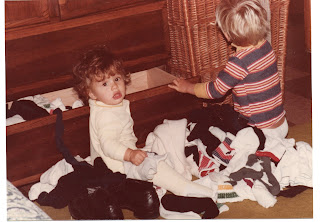 Well, except maybe "empty out Dad's sock drawer"
Posted by Inga at 6:52 PM