I’ve already written about the slide rule I bought Olof for Christmas that has warmed his geeky heart, and also the birthstone stud earrings I bought for my 8-year-old granddaughter - the first jewelry gift I’ve ever bought for a child or grandchild.  (As previously noted, my sons and nephews weren’t that interested in jewelry gifts.)

But there was one more successful Christmas gift this year.

For his seventh birthday, our grandson had asked his other grandparents for a drone.  Seemed kind of cool and you could do all sorts of fun things with it, like spy on the neighbors.  The other grandparents, being as doting as we, provided one.

Cleverly, the other grandparents live in Connecticut so they merely shipped the drone out to Los Angeles thanking their lucky stars that they wouldn’t have to be the ones to actually read the directions and get the thing airborne.  But I think they also thought:  how hard could it be?

I am presuming they thought their daughter would be the one to tackle this task as my son, despite more talents than any human being ought to be allowed to have, cannot change a light bulb.  Seriously.  When they first married, we would buy our daughter-in-law new tools that she coveted for her tool box.

But she is a busy woman.  In addition to three young children, she has a YouTube channel that gets 60 million hits a month.  Nope, not a typo.  But it doesn’t leave her a whole lot of time to be assembling drones.

So my son and daughter-in-law hit upon the perfect solution: at Thanksgiving, they brought it down to our house.  Our grandson had had what was turning out to be an expensive paperweight for three months by then and was giving up hope that it would ever see sky.  But his parents assured him that Baba Olof, an engineer, was the man for the job.

While the drone made it down to our house, the instructions didn’t.  Such was their faith in Olof that I’m sure they thought he didn’t need them. And normally, like most men, and certainly most engineers, Olof eschews directions as the prerogative of men who wear women’s underwear.  But as it turns out, you needed to be a nuclear physicist to operate this drone.

Wait.  Olof IS a nuclear physicist. Well, okay, his degree is in reactor physics. But he quickly realized this was going to take some serious study and practice which wasn’t going to happen before the end of the hectic Thanksgiving weekend.  But it was definitely in the realm of possibility for Christmas up in L.A.

So he did the only decent thing: he bought the identical drone for himself. It was a sacrifice, but somebody had to do it.

I would point out that he did not do this for our granddaughter’s Barbie Camper which had totally thwarted him the year before.  He just let Barbie pitch a tent.

Every day in early December, Olof would be checking the steady supply of packages arriving from Amazon.  Is it here yet?  Despite Olof’s altruistic motives, I wasn’t fooled that there wasn’t a element of Engineer-and-Shiny-New-Toy involved here.

Meanwhile, I was placing bets on how fast it would take the L.A. neighbors to shoot both drones out of the sky.  But Olof was careful to take ours out for practice in suitably unpopulated areas here in San Diego and sent advance notice to our son and daughter-in-law that given their proximity to LAX, they might pre-screen a suitable flying zone.  The Gatwick thing didn’t exactly promote any good will toward small unmanned aircraft.

And finally, when all systems were go, he sent a missive to our grandson via his parents’ email:
It looks like we’re all set for drone flying at Christmas. The drone actually flies itself, based on onboard software and sensors.  What you do with the controls is simply tell it where you want it to go.  If you let go of all of the controls, it doesn't crash.  It stops and hovers in mid-air.  I'm confident that if I can learn to do this, a master of video game soccer like yourself will have no problems.  (Your father will no doubt confirm this, having watched me struggle with Nintendo games.  But don't believe his story that he once beat me 135 to 0 in Nintendo Football.  In reality, his team barely broke 100,)

And sure enough, on Christmas Eve day, Olof, our son, and our grandsons went to the designated Suitable For Flying Drones Without Being Blown Out of the Sky by Federal Agents Location, and launched them. It was really fun.  But then came Christmas morning and a new bunch of Exciting New  Toys showed up.  So that may be these drones’ short but exciting lives. Maybe we can see if Amazon is in the market for some like-new delivery vehicles. 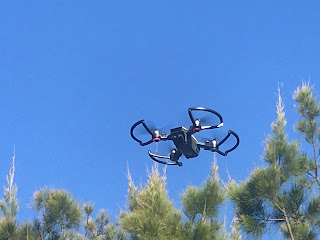