It's A Question of Balance

It’s a topic I’ve written about before, but “smart” appliances have totally run amok.  Some months ago, I wrote about a friend’s dryer that had an auto “wrinkle control” feature that fluffed up dried clothes every 30 seconds until the door was opened.  The friends went on a trip to Europe having put clothes in the dryer before they left. It was still fluffing when they returned.

I thought that was hilarious until we bought a new washer recently. Now, I know from writing on this topic previously that there are plenty of other people out there who long for the days of simple washers who let you do the thinking.  We had hung on to our previous washer for 16 years on the advice of repair persons who said the newer ones were not nearly as good as this one.  But ultimately the machine’s transmission went bad (a really expensive repair) and we sent it to the big appliance repair yard in the sky.

If I had it to do over again, I’d put in a new transmission.

Our washer options are severely limited by the fact that it has to fit into a very limited space, making even a quarter of an inch a deal breaker.  We bought the simplest washer that would fit.  It was the same brand we had before, so how different could it be?

Oh, let me count the ways.

The first time I turned it on, I knew within seconds that something was terribly wrong. The machine sounded like it was gasping for air, or at least gear engagement.  No properly working machine should ever sound like this one does.  Except, of course, that the first page of the manual, obviously dealing with this issue on a regular basis, assures you under “Normal sounds you should expect” that it does.  Our dog is terrified of it.

Every time it switches from one cycle to the next, the pipes in the whole house reverberate.

Unlike washers of old (which is to say, good washers), you don’t distribute the items evenly around the agitator but instead drop them in polite clumps and let the washer distribute them as its own faulty idiotic sensors see fit.
When I ran a full load, I was astonished to discover that the water level was barely five inches and hardly covered the clothes.  But the manual notes that “this is normal operation for a high efficiency washer” and “the load will not be completely under water.”  So, are we dry cleaning here?

I have to use a special detergent marked HE (High Efficiency) which apparently is low-sudsing (to go with the non-water level).  Regular detergent will apparently break the machine if used continuously.
It tangles up all my sheets into knots.

The spin cycle is so aggressive that I fully expect the clothes to come flying out the top of the washer.

And don't even get me going on the "Lid Lock" feature.

But worst of all: all those blankets that I have been washing for years in my old machine throw this one off balance.  And I mean, if I weren’t home to turn it off, that machine would be in our living room.  KA-THUNKA KA-THUNKA. It sounds like it’s spin-cycling a bowling ball.

No matter which cycle I used, how I distributed the blankets, or what other items (or lack of items) I put in with a heavier blanket, this machine will implode. Ultimately, I have to have Olof drag a 90-pound sodden blanket out to the patio and let it drip dry enough to put in the dryer.  Even then, we’re afraid it’s going to break the dryer.

I read the manual numerous times before calling for a warranty call about the balance issue.  The repair guy who came did say that I should ignore the self-balance instructions with the heavier cotton blankets and drape it around the agitator.  Not that this helped when he himself tried it even using the recommended “bulky items” option.

His conclusion: “This blanket is too heavy for this machine.”  It’s a COTTON BLANKET.

As for the ridiculously low water levels, he explained that “this is a California washer” and these very low water levels are now mandated. I’m wondering if there’s a black market for, say, Nevada washers.

But here’s the kicker:  He put the machine through all the diagnostic tests, including checking its struts and making sure the machine is properly balanced, all of which it passed. (It should, it’s a brand-new effing machine!)  But because it passed all its tests, he is supposed to charge me for a service call - even under warranty! – because the problem is considered “customer error.”  But seeing the look on my face, he created a phony error message that he phonily fixed so the call was free. Because he would not want to be run through this machine’s spin cycle. 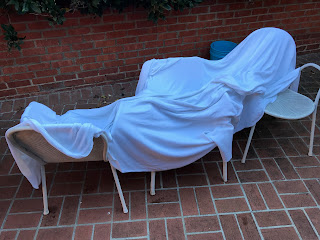 This constitutes the "spin cycle" of our new washer:
24 hours dripping on our patio