Has Technology Become Too Technical?


[“Let Inga Tell You,” La Jolla Light, published August 15, 2018]  ©2018
I’ve been using computers, printers, and scanners for several decades now so you’d think I’d have the hang of them.  But every new version becomes increasingly unfriendly and unworkable.  Am I just getting stupider?  No, don’t answer.
My personal theory is that technology has just become too technical.
When I had to replace my 2005 3-in-1 printer-scanner recently – a machine that was so user friendly that I never had to read the instruction manual – I ended up returning two of its successors as being so utterly user-hostile that I simply couldn’t make them work.  It goes without saying that there is no longer an instruction manual and that the machine itself is entirely icon-driven rather than using words.  I suppose this is so the machine can be used across many languages but in actuality ensures that no one on any continent can actually figure them out.
On-line help doesn’t speak English.  (Actually, human help doesn’t either.) That is to say, you have to know the technical term for your problem or it can’t help you.  (I once discovered – or Olof did – that the problem I was trying to fix was “icon overlays.” Why anyone would even need to overlay an icon is beyond me but suddenly my screen was riddled with them.)
Not too many years ago, if your computer was working fine on one day and you didn’t mess with it, it would be working fine the next day too.  Not anymore.
There are infinite numbers of things that can go wrong with your computer. And Microsoft thinks of new ones every day. They’re called “updates”.  Unsolicited updates and undesired upgrades are the curse of the modern world. They guarantee that whatever worked before will never work again.
If you change one teeny weeny little thing on your computer, it’s like the butterfly in Australia that flaps its wings and causes tornados in Kansas.  Trying to fix that problem changes enough things to add monsoons in Asia.
Error messages, meanwhile, are a cruel psychological test. The one thing you can be assured of is that whatever it says is NOT the actual problem.
One thing I’ve learned over the years: electronics are sentient beings.  Technical gadgets sense fear and totally take advantage of it.  Laugh if you will, but I have found irrefutable evidence over the years that while computers like to jerk around people like me just for the fun of it – it knows deep in its little microchips that I am afraid of it – they themselves are terrified of actual techno-geek people like my former work colleague, Dave, or my engineer husband, Olof.  As soon as they sit down in my desk chair, the printer that wouldn’t print color for me suddenly produces brilliant rainbow images, or the document that wouldn’t format correctly miraculously prints exactly how I’d been trying to make it print for the last FOUR HOURS.
I really do try to fix these problems myself.  For most new software, there IS no tech support other than “community groups” for which you are dependent on the kindness of totally inept strangers. My experience with community groups is:
(1) nobody answers your question
(2) lots of people answer your question but none of the solutions help
(3) I can’t understand any of the solutions
(4) the solutions will mess up my computer to the point that the original problem will seem insignificant.
Personally, I think there is a lot that could be done to standardize electronics. For example, if I were President, I would make it a law that all documents have to be fed either face up or face down.
If an electronics company had asked me, and inexplicably they never do, I would help them design a computer that real people, especially aging non-technical but really nice people, could actually use.  The Clairvoyance Model.  Your computer would get to know you, realize that those nasty keystroke commands that are the boon of techno types, but the bane of the techno challenged, should be ignored at all costs.  The Clairvoyance Model would quickly learn that you have the frustration tolerance of a gnat.  It would sense when you are so aggravated with your computer that you are ready to drag it out to the driveway and run it over with your car.
My one hope is that Alexa, the voice-controlled Amazon robot that everyone except me seems to own, will ultimately become the tech support that seems to have globally disappeared.  Maybe she has connections with Microsoft that we mere mortals don’t.  Unlike tech support, she’ll actually answer.  No hold time!  “Alexa,” I’ll say, “my ruler disappeared from my Word documents after the last update. Please find it and put it back.”  Or maybe, “Alexa, please install my new “self-installing” (ha!)  printer before I give up and throw the effing thing in the pool.” And it will be done. 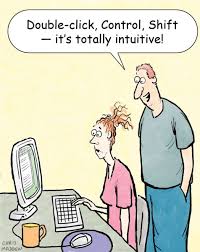