My parents moved from suburban New York City to Princeton, New Jersey when I was in college.  Olof’s parents, meanwhile, had their East Bay home eminent domained to make room for an interchange between the 680 and 24 freeways.  In both cases, our mothers asked their young-adult children what items they particularly wanted saved in the moves.

Both mothers claimed to be astonished by the kids’ choices. Where had they gone wrong?

In Olof’s case, he and his two sisters engaged in ardent verbal combat over who was going to get custody of the pollywog pan.  It was actually an old canning pan from their grandmother’s home in Salem, Oregon, that had been used for canning applesauce.  But Olof and sisters used it in the creek behind their house to capture pollywogs, who perished by the thousands, the few survivors becoming toads in the family’s garden. Olof had better hope that on Judgment Day, pollywogs don’t get a say as to what happens to you.

In my house there were several hotly contested items. One was the Kool-Aid pitcher, a hand-painted ceramic vessel of dubious origins that probably leached lead. In the summer months, that pitcher was refilled continuously with artificially-colored powdered dye and diabetes-producing quantities of sugar.  When I look back on how much of that stuff we consumed, I can’t imagine why our own kids weren’t born with two heads.  But my sibs and I were deeply, emotionally attached to that pitcher.  I think it symbolized a carefree time in our lives when summers were unscheduled and the neighborhood kids just went out and played all day, wandering en masse from one house to another to empty that home’s Kool-Aid pitcher before heading back out again.

My sister would later contend that since she wore it last, it was hers and by all rights, she should have it for her future daughter.  I contended it had been given to me first and I only loaned it to her because I was a really nice person.  My future daughter was entitled to it.  (For some reason, sharing was never considered.)

The third item I coveted was a cheap plastic reindeer ornament that had come from the set of the GE-sponsored Fred Waring Show, one of the first musical-variety shows on TV. My father’s first job out of business school after the war was in television advertising.  Dad would regale us in later years with stories of live ads – all ads were live then - that went totally wrong: opening the freezer of the Mr. Frosty refrigerator to demonstrate how cold it kept the ice cubes only to find that the hot studio lights had melted them. Or the time that someone stole the GE iron right before show time and the single store open on a Sunday afternoon only had a Westinghouse model which, in desperation, they used. When the show disbanded, ornaments from the show’s Christmas tree were distributed to employees.  I always made sure the reindeer was hanging near my presents.

So, here’s how it all came out.  Olof and I are, in fact, in possession of the pollywog pan.  We recently updated our wills and trusts and I told Olof that it would be a nice thing that if in the list of bequests, he leaves the pollywog pan to his sisters.  Maybe they can start fighting about it all over again.

As for the Kool-Aid pitcher, my mother maintained she didn’t know its whereabouts but I think the real answer is that it had been relegated to the Salvation Army bin years earlier and was now shortening the lifespans and damaging the brains of a whole new generation of children.

As for the First Holy Communion veil:  I am guessing that it had become irretrievably devoured by mildew in our damp Westchester basement and had long since been turfed.   Not that it mattered.  Neither my sister nor I married Catholics and we only had sons. God works in mysterious ways.

As for that cheap plastic reindeer, it’s still got a special place on my Christmas tree. I guess one out of three ain’t bad. And sorry, sibs:  I am NOT sharing. 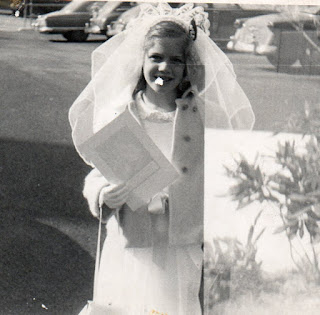 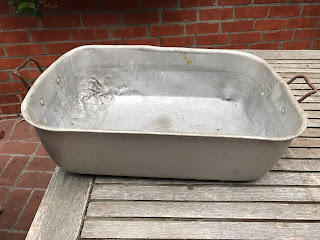