Who'd Be A Mother?

A friend sent this email: “Ethan totally disgraced me in the Easter play at nursery school. He refused to be a raindrop, didn’t sing any of the songs or play his musical instrument or participate in it any way – all of which I could easily accept.  What mortified me was that he sat on the stage and picked his nose – and ATE it – all through the play!  Afterward he demanded chocolate to celebrate having been in a play!  Who’d be a mother?”

Who indeed? It’s probably a really good thing we can’t see into the future.  Otherwise, we’d probably never have children if we knew we’d have moments like this:

Leaving a 75% tip after your toddler throws up in the antipasti plate at the upscale Italian restaurant.

Buying an entire display of out-of-season organic tomatoes after your five-year-old pokes holes in them with a caramel apple stick.

Going to the school open house and noticing that your son’s contribution to the display of illustrated alliterative sentences is “Paco the pimp pestered the picky prostitutes.”

Taking an entire afternoon off work to sort through several hundred totally disgusting lunch bags in the dumpster at your child’s elementary school to find the $200 retainer he accidentally threw out that you, as a single mom, cannot afford to replace.

After his first day at his seemingly wonderful new school, your child responds to the friendly greeting of the supermarket checkout clerk with “Shine it, bitch!”

Going to your friends’ home for dinner and one of your kids says, “Look, Henry!  Real plates! And it’s not even Christmas!”

You go to brush your teeth and find the toothpaste, minus the top, floating in the toilet.

Your three-year-old, who has serious speech problems secondary to hearing issues, tells people that when he grows up, he wants to be a “f—k diver” (truck driver).

Your 4-year-old announces he wants to be pregnant for Halloween.

Your five-year-old spray paints every inch of his three-year-old brother silver. Pediatrician recommends soaking child in bathtub in “several gallons” of baby oil (which come in 15-ounce containers).  You buy out the entire baby oil stock of five drug stores, silver three-year-old in tow.

Your non-athletic child is playing goal in youth soccer.  When the other team comes charging down the field with the ball, he has his back to the field and his fingers hopelessly entangled in the net. Goal is scored, game is lost, other parents query loudly why “some kids” are on the team.

Your kids get you an extra-large wine glass engraved with “Mom” for Christmas.

You don’t want to confess to your college-bound son that Mom’s “secret” chocolate chip cookie recipe all those years was Pillsbury Slice n’ Bake.

During final exam week at college, your son ignores an oil leak under his car which ultimately ignites in the unseasonably hot weather, burning his car and the one next to it in the parking lot to the ground. It also melts the asphalt underneath.  It never occurred to you to buy asphalt insurance.

My friends, of course, have their own stories they’ve shared over the years:

From a friend, potty-training her two-year-old: “I was sure Laura was right beside me in the bathroom fixtures display room only to turn and see her proudly pooping in one of the display toilets.  I will never leave home without a full packet of tissues again!”

From my neighbor: “Another mother and I were summoned to the counselor’s office at Muirlands (Middle School) after our sons were caught writing an obscene note.  The counselor showed us the note, pointing to a word beginning with “k”.  ‘Geesh,’ she said, shaking her head, “Don’t these kids even know how to spell ‘c--t’?’”

Another neighbor, whose son was a kindergartener at Evans School, was called to pick him up for the third time that week after misbehavior on the playground.  Seeing that Mom was totally at her wits end with him, he patted her arm and advised, “You should draw a palm tree.”

Another friend tells the story of her extended family renting a large passenger van to take them up to a weekend retreat in the mountains. On the way up the steep road, they went over a large bump. From the back of the van came the voice of her five-year-old addressing her father who was driving.  “Jesus Christ, Perry!  You almost made me spill my drink!”

From my daughter-in-law’s mother: “The kids wanted pets when they were little and since both parents worked, we got each of them a male hamster for Christmas. Except that a week later, one of the “male” hamsters gave birth to 12 baby hamsters.  Which the other male hamster ate. In front of the kids.”

Yes, who would be a mother indeed? 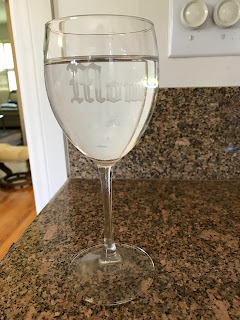 One year my kids gave me a wine glass
engraved with "Mom" for Christmas
Posted by Inga at 10:55 AM