If there is one thing we can observe about our five young beloved grandchildren – fondly referred to by my husband as “the destroyers of peace” -  it is that they have just as much energy as they have ever had, but we have way less.

We recently had them for a three-day weekend with their dads.  Our daughters-in-law were supposed to come too but one daughter-in-law, a teacher, had just been promoted to principal of her school so her work year started early.  The other daughter-in-law had just returned from a fun but exhausting two-week family vacation to the east coast. She said she hoped I wouldn’t be offended but there was nothing that would make her happier than three days Home Alone.  I wasn’t offended at all. I remembered the feeling well.

Now what was different about this visit was that without the organizing influence of the two moms, things got a tad chaotic.  The kids’ rooms at our house looked like cyclones had hit them.  We have a pool, which was a godsend in the stifling heat, but beds and floors were a sea of clothes, shoes, and wet towels.  There were probably more red solo cups strewn around than the morning after a fraternity kegger.

I’ve long since learned to only buy the smallest size water bottles.  Every evening I did a sweep around the house to collect the two dozen or more containers that had been opened, had two sips taken out of them, then abandoned.  My potted plants were really grateful.

And then there was the issue of everything in the living room ending up on the floor.   We have a really small house, just one small living room, no family room.  The sofa has throw pillows, some chenille throw blankets, and our assorted stuffed Swedish moose collection.  But still plenty of room for people. Within 30 minutes of the grandkids arriving, every single item on the sofas is on the floor.

The upside, however, was huge.  There was a lot of brother love between my sons, never mind some serious cousin bonding.  This is the age those bonds need to be made.  My sons spent a lot of time in their youth making adventure movies with our very low-end movie camera, and it was heartwarming to watch the cousins filming similar movies with their iPads.  They had some amazing special effects in theirs.  I asked one of my grandsons how he had done one of them and he said, “Easy. With a green screen.”  I have absolutely no idea what that means. Elementary school kids know this?

During down time, I played a DVD of my kids’ old movies which I had managed to save and have transferred from VHS.  The grandkids loved seeing their fathers, not much older than they are now, making movies in the exact same backdrop.

There were definitely some visible changes in the times.  Right after breakfast, three of the kids were glued to their iPads listening to…I have no idea.

I had saved some of the toys that my sons used the most and love seeing them get a second life with the grandkids.  Wood blocks.  Lincoln logs.  Matchbox cars and a floor mat to run them on.  And small toy guns.

When I was a child, I can remember my toy pistol-toting brother and his friends playing “cowboys and Indians.”  I can assure you that cowboys and Indians would now be profoundly politically incorrect.  In fact, school children the nation over no longer sit “Indian style” on the floor but sit “cross cross applesauce.”  No idea what applesauce has to do with it other than it rhymes with cross cross.

All of my kids’ toy guns were former cap guns.  I can remember all manner of shoot-em-up games going on in the front yard with the neighborhood kids, sometimes just using thumb and fore finger instead of actual toy guns.  But given the epidemic of shootings in this country in recent years, the guns suddenly took on a really bad vibe to me.  They’re now in our trash bin.  An era that needed ending.

After three really fun but utterly exhausting days, the assorted families packed up and departed amidst a lot of hugs, final movie edits, snuggles with our dog Lily, and weepy goodbyes, leaving Olof and I to survey the debris field of our home which we elected to ignore in favor of falling face down on top of our bed for a serious nap.

When I pulled back the covers later that night, I was delighted to find a note written on two paper napkins from my eight-year-old granddaughter: “When will you come to L.A.?  I miss you. Avery.”  She drew lots of hearts on it too.

You can overlook a lot of wet towels, goldfish crackers, and Solo cups for that kind of gratitude. 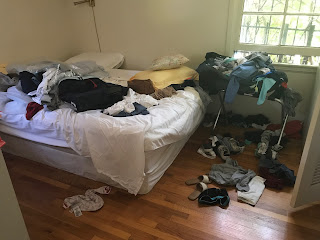 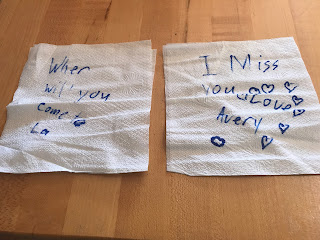 The best reward of all