Recently I noticed a recipe in AARP Magazine for Kimchi Stew which I cut out for Olof. I noted that Kimchi Stew combined his two least favorite foods – kimchi (popular with his first wife) and tofu – into what would be his Ultimate Worst Meal.

OK, maybe penultimate worst meal.  When we lived in Sweden, we were determined to try everything, including a sour fermented herring called surströmming. I think the best approximation of the smell would be rotting corpses awash in a massive sewer backup. The recipe is as follows: “This dish is prepared from the small Baltic herring, which is salted and set aside for a rather long time. When the souring process (a process of controlled rotting or fermentation) has got under way, the fish is put up in hermetically sealed tins, which are distinctly swollen by the time they are ready for sale.  A pungent aroma – delectable to some, repulsive to others – fills the room whenever a can is opened.  By ordinance, the year’s supply of sour herring may begin to be sold on the third Thursday in August, and this signals the start of festivities.”

OK, so already you’re wondering where the words “delectable” and “festivities” come into this. Putting a sales embargo on this year’s “crop” until the third Thursday in August is a brilliant feat of marketing.

While it is not polite to make fun of another country’s semi-national dish, surströmming is not a universally loved food even among the Swedes, who, as the description above suggests, either love it or hate it.

American neighbors had purchased a can of surströmming at the local fisk hallen which had been residing in their fridge just waiting to be shared with guests they hoped would leave.  Er, no, with equally adventurous friends. So one Sunday night, we opened the can at our house.

One thing became very clear: this is truly raw fish.  Efforts to think of it as simply Sushi Gone Bad were in vain.  But we were all determined to go through with it, buoyed by the knowledge that Swedes had been eating it for centuries, and that we had a reservation at an Italian restaurant at 8:00.  To eat surströmming, Americans have to suspend all previous knowledge and instinct, along with several millennia of good sense. It goes against everything we know to eat stuff from an (a) bulging can that (b) screams botulism and is (c) both raw AND rotten and that (d) smells like a global plumbing disaster, and (e) is really slimy, never mind has an (f) high risk of explosion, and that (g) - despite (a) through (f) - we should embrace as a delicacy.

Eating it right off a cracker with a dab of onion and a bit of sour cream as the purists do (and we did as well) apparently takes years of training, and quite possibly Swedish genes. One can also bury it in a casserole of potatoes (proportions something along the lines of 200 to 1).

Surströmming is  definitely an acquired taste which neither Olof nor I acquired while in Sweden.  But we hadn’t been big fans of  herring in general when we arrived and came to love non-surströmming varieties.

We discussed over the table what the history of surströmming might be.  It’s obviously been around a long time (literally and figuratively).  It would definitely have been the ultimate economical olden times party food.  (One can feeds 50 because the other 49 aren’t eating it.)  Herring is certainly plentiful so even in times of famine, there’s always going to be fish.  In fact, that is Olof’s personal theory about it all: that during the long harsh Swedish winters when food was scarce, this was the fall-back food. It was eat this or eat your children. (In my view, it must have been a hard decision.)

We could imagine what life was like during those times: “Hey, kids!  We’re having surströmming again tonight! (And for breakfast, lunch, and dinner tomorrow.)  Hmmm, isn’t this just totally yummy?  Oooh, and this batch tastes particularly rotten – just the way mommy likes it!” Apparently salt (for curing) wasn’t widely available and  the production of this stuff required only a small amount of the then-precious mineral which allegedly slows down the actual rotting process in favor of fermentation.

Because the cans are fermented and bulging, they cannot be taken on a commercial airliner in carry-on luggage as the cans could explode if the cabin lost pressure. (Some airlines have apparently classified it in the same category as shoe bombs, an act that Swedish aficionados of this raw fish grenade term “culturally illiterate”).  If a pilot thought he had problems with cabin pressure, it would be nothing compared to the passengers throwing open the emergency exits and bailing out of the plane at 35,000 feet.

So, Kimchi Stew, I think you’ve met your match. 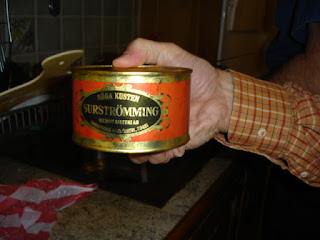 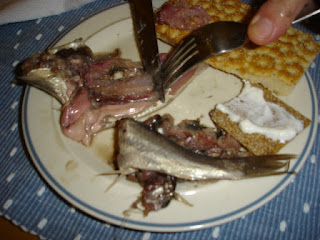 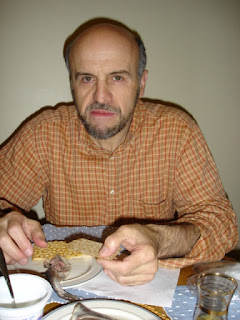 John's face after his first bite 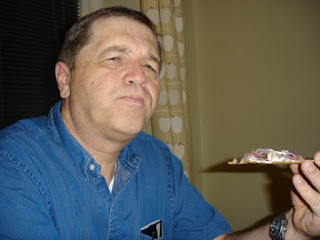 Olof's face after his first bite 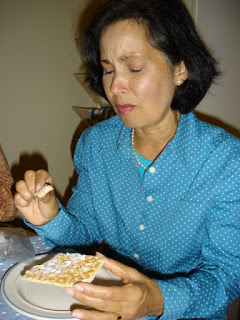 Sonia's face after her first (and only) bite