If you think there is a lot of contention about the seals and sea lions at the downtown La Jolla beaches, you don’t read Next Door.  Dog Poop Wars – with photos – are constantly waging, and with no more likelihood of a meeting of minds than about the local pinnipeds.

The combatants are roughly divided into six groups:

(1) Responsible dog owners who pick up after their pet and only dispose of the bags in their own or public trash cans.

(2) Semi-responsible (but see below) dog owners who pick up after their pet and dispose of the bags in the nearest homeowner’s trash bin.

(3) Irresponsible dog owners who pretend to be on their phones when their dog is pooping on someone’s lawn.

(4) People who may or may not own a dog but enjoy tormenting people who post “Pick up after your dog signs” on their lawns.

(5) People who let their dog poop on the sidewalk – and leave it there.

(6) People who simply hate dogs, pooping or not.

Within Category 2, there is raging debate as to what circumstances it might be OK to put your bag of dog poop in someone else’s trash can.  This subject has even been passionately argued nationally in Dear Abby. The hotly-contested options include:

(2) On trash day, before that trash can has been picked up

(4) Only in the trash bins of fellow dog owners

(5) Especially in the trash bins of non-dog owners, just to annoy them

(6) If you don’t see any security cameras

I know people who specifically review their security cameras not to see who broke into their garage but to see who is putting dog poop bags in their trash.

During my daily walks around my neighborhood, I often see piles of poop from what is clearly a very large dog artfully arranged around the base of a “Please pick up after your dog” sign.

Given the precision of placement each time, one might conclude that this is imported dog poop that has been intentionally staged to annoy the owner of the sign.  The only alternative is that some very passive-aggressive person has specifically trained their pooch only to poop around the base of those signs.  Inquiring minds (and America’s Got Talent) want to know.

I myself have grown suspicious. Given the staggering resemblance to previous piles, is it really even real poop? On a hunch that I now deeply regret, I searched “fake dog poop” on Amazon.  You can buy some frighteningly-realistic looking dog egesta for $5 in either regular or “chunky”, or a 6-pack of assorted styles for $11.  This will haunt my dreams.

As a dog owner myself, I obviously have opinions on these issues. Our city-mandated-and-dispensed black trash receptacle lives at the far end of our driveway nestled next to our house, its unfortunate accessibility making it a neighborhood poop dump of choice.   In the pre-city-dispensed receptacle days, our trash cans resided safely inside our back gate away from excretory-abandoning miscreants.   But the required new bins are too big for that space.  If you opened our trash can on any given day, you’d think we were running a kennel for digestively-compromised canines.

So a few years ago, I decided to importune the offenders with a polite entreaty on the top: “Please – we’re asking nicely - no dog poop in the trash bin!”

Of course, that just dares people, just like the yard signs, even though our sign was posted on top of the bin where you couldn’t see it until you were right there.

Despite the sign, I’d still heard the lid of my trash can being raised during the day, but more quietly, and admittedly less often than before.  I confess that I sometimes entertained delicious fantasies of rigging it in some excretorially-vengeful way.  But forget to disarm it even once and the garbage men would never pick up our trash again.

I finally decided it wasn’t worth the energy. I took off the sign. Have at it, folks. People are gonna do what they’re gonna do.

But I think there is one consensus. There ought to be a special place in hell and/or the DMV non-appointments line for people who leave trails of dog poop on sidewalks. 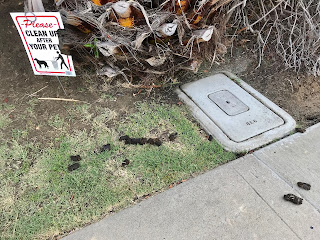 Unsolved mysteries: every time this is cleaned up, it's back again a few days later

in the exact same place