Pandemic Eating: When You Ate The Whole Thing

A Harris poll done for the American Psychological Association that was released in March showed that 42% of Americans have gained a stunning 29 pounds on average during the pandemic.  this made me feel better since I only put on 21.

I just couldn't seem to socially distance myself from my refrigerator.

It didn't help that Gelson's doubled down on their six-packs of freshly-baked chocolate chunk cookies, maliciously placed just inside the door.

Meanwhile, Fox News reported on August 7 that a Russian woman sued McDonalds maintaining that their mouth-watering cheeseburger ads completely demagnetized her moral compass compelling her break her Lenten fast of meat and animal products.  In the U.S., of course, that would earn McDonald’s a Clio.

Maybe I could use this as a precedent to compel Gelson’s to send me to the fat farm.  I was thinking The Golden Door.

It’s a well-known fact that Americans are fatter than they were one or two generations ago. Partly this is due to the many ways that people used to have to burn calories that they don’t have to any more.  TV remotes immediately come to mind.  My grandchildren were agog to learn that there was a time that people (that would be moi) had to get up and walk over to their TV to change the channel.  Then you had to walk back over a few more times to adjust the rabbit ears to get the reception right.  Which, actually, never quite happened.

We had to manually roll up the windows on our pre-power-steering cars. Typewriters were manual. As a tot, I wrung my fingers in our wringer washing machine.  (Early 1950s IQ test.)

It was definitely a more active era.

However, I was delighted to read in the April/May issue of AARP Magazine about a study that found that people ages 70-75 who were overweight were less likely to die over the next ten years than those of “normal” weight.  The article didn’t define “overweight” and I certainly am not going to ask.

Still, this gave me serious pause.  I have been working hard to shed those Chocolate Chunk Cookie pounds. But am I risking my health by doing so?

Prior to my divorce, I always wore a size 4, which in today’s deflationary size market is probably a 2, or even a 0. (Personally, I think size 0 is what you should be after you’ve been dead a while.) Afterwards, I packed on 30 pounds eating the Post-Divorce Mrs. Fields Cookie and Chardonnay Depression Diet. (You may be noticing a common thread of chocolate chip cookies in my weight journey.) Alas, I’ve been heifering, er, hovering around a size 16 ever since.

My kids were three and five when my first husband and I separated and have few memories of us together.  When showing some DVDs to the kids and grandkids last year, my older son, the irrepressible Rory, said, “So who’s that woman with Dad?”  I said, “That’s me.” He said, “Nah, your ass was never that small.”  Out of the mouths of 42-year-olds?

I still think of myself as temporarily overweight, that this extra adipose is a mere blimp, er, blip in my life. But the fiction is getting harder of maintain when I remember that I was divorced in 1983.

Now, even aside from health concerns, there are compelling reasons to not be fat.  Among them is texting. It is truly to your advantage to have pencil-thin fingers. At least if you want anyone to actually understand what you wrote.

Another, of course, would be clothes shopping. I would chat it up with the personal shopper at Nordstrom who would inform me that they usually only order one size 16 in any particular style and those are so in demand that she immediately pulls them for her regular customers.  Now, I’m not in retail, but if I had a size that was instantly selling out, I’d order, well, more. But I’d be missing the point. Once you get past a certain size, department stores don’t want you waddling around in there among the osteoporotic svelte.

Chunker departments, where they even exist, are invariably hidden in a corner of the third floor which you can spot from fifty yards: racks of nasty brown, navy, and black polyester slacks, and skirts with hideous floral prints in colors not found in nature. We chunkies just hate wearing this stuff – a point that I routinely note in the feedback box at Nordstrom Oinker. (It’s actually Nordstrom Encore, but if you say it fast it comes out sounding like Oinker, which, in fact, I am convinced is the subliminal meaning in that choice of word. What, after all, does “encore” have to do with fat people?)

Meanwhile, I’ve just got to put my hopes into Gelson’s doing the right thing by me and making that reservation at the Golden Door.  I may have to do a cookie detox first. 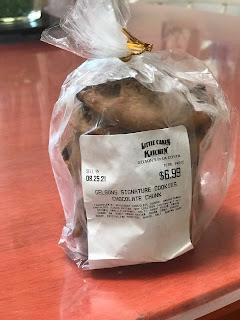