Just When You Thought Things Were Getting Back To Normal

The stove gods have been pooping on our heads again.

We were enjoying a quiet post-prandial evening last month when all of a sudden we heard the ominous Three Beeps of Death.  We looked up at each other from our books, hoping against hope that this was some other appliance beeping at us. I’ve done whole columns on this, trying to determine which of our many electronic apparati is vying for our attention. If we had Alexa, our first request would be “disable all beeping.”

But these three beeps were all too familiar.  On three previous occasions they had been immediately followed by the dreaded F2 E1 error code.  The electronic panel has shorted out.

We know from past experience that there is no hope for this.  It’s going to be a whole new panel – about $500 after service calls and wait time for it to be ordered, during which time we will be relegated to microwaving and crock potting.

But the idea of not having a stove for indeterminate periods puts my sourdough-enthusiast husband into full yeast-deprived depression.  Last year when this happened, we decided to just go buy a new stove.

Alas, it was early-on in the pandemic. In April, 2020, appliance emporiums were only accepting on-line orders – you couldn’t go into the store itself – and were not installing.  They would deliver your large kitchen appliance to your garage (we don’t have one), or alternatively “curbside” which, translated into English means “in the street.”  Where a car could hit it.  And certainly not improve the functionality of the appliance especially if it is now on the next block.

Then there was the more-than-minor problem about getting this curbside appliance into our home which would included a long walkway and several steps. We're senior citizens.  So the two of us wrassling a heavy appliance box from the street into our house might not be an exercise we would survive.  We would, of course, instruct our children to sue the appliance place for premeditated, wrongful, elder-abusive death.

OK, so let's assume that we were actually able to get the new stove into our house and into our kitchen. It's a gas stove.  Gas stoves are connected by means of something called "gas lines." We could just see getting the whole thing installed only to turn it on and blow up the house. And ourselves. It just seemed that the appliance company ought to be a tad more concerned about liability in expecting people to install their own major appliances. Covid-19 would eventually go away, but personal injury lawyers are forever.

So our only alternative was to get the panel replace again. A mere 13 months later - 1 month out of warranty - it shorted out again.

But hey – the pandemic was now pretty much over. Installers would come into your house! I went on-line to look at our prospects.  It had to be a 30-inch gas slide-in, white, but other than that we were flexible.

There was exactly one option that was going to be available to us before early November (we’re not even sure they meant 2021).

Friends had mentioned that they’d had similar problems ordering large appliances. Factories were closed for months during the pandemic.  Parts were not being manufactured either.

The brand we were forced to buy had $1,000 worth of features we didn’t want and will never use.  An air fryer, for example.  We don’t even regular fry. And by the way, the no-pre-heat feature for the air fryer was an additional $200. It also had convection (never used it on my old one), and worst of all, a center griddle that takes up much of the cooking real estate on an already-narrow stove top.  But it advertised it can do six grilled cheese sandwiches at once!

Further, the store that was carrying it had exactly one of them left in their warehouse until potentially the next millennium. But allegedly available for delivery next week.

And, in fact, it did show up despite multiple people warning us that we’d probably get a call the night before saying, “oops, don’t have it after all.  Next order expected in January.”  It’s apparently an all-too-common post-pandemic experience, along with four-hour hold times with airlines, a dearth of restaurant workers, and a national shortage of pool chlorine.

Personally, I would give anything to be able to buy a stove of the type I grew up with that exactly two dials – one for preheat-bake-broil and the other for temperature, and exactly one thing that could go wrong with it (the bake igniter at the bottom).

But in the spirit of embracing all the features we never wanted, Olof and I made air fried onion rings on the Fourth of July which really weren’t bad. Olof can bake boules again which is a major mental health benefit.  And at least we don’t have to be on hold with an airline. 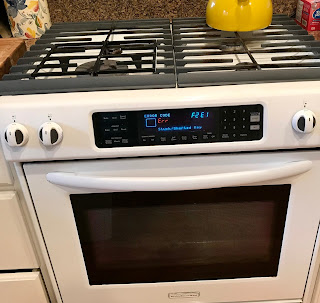 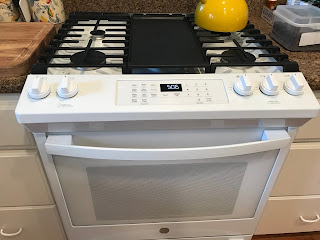 I see a lot of griddling and air frying in our future
Posted by Inga at 5:13 PM