One of my most common topics over the years – and probably the least favorite of the local Chamber of Commerce – regards La Jolla’s rat problem.

The little varmints are insidious.  Also pervasive, prevalent, ubiquitous, widespread, epidemic, and generally everywhere. If you were a rat, you wouldn’t choose to live anywhere else.

This is because upscale areas like La Jolla offer lush foliage for high-end rodential housing, never mind a veritable cornucopia of rats’ preferred cuisine, including and especially oranges, pet food, and snails.

On your tax bill, you pay for something called Vector Control which deals with disease vectors, particularly typhus, plague, and Hanta virus, all potentially carried by our rodential residents. Rats can also be complicit in damage to the wiring in one’s home should they move into your warm cozy attic.

When you have a prolific orange tree as we do, word gets out in Rodentia Land.  I’ve spent four decades attempting to control our rodent guests with everything from reducing their food supply (donating all the oranges to food banks) to smiting the little buggers in ways that sometimes make even me feel bad.

In my defense, I did try to start with the humane approach. A gentleman from a local pest control firm responded to my call for rat-control services and installed live-capture traps around my property with promises that he would be back daily to check on them.  It was all very humane, he explained.

“So, what do you do with them after you catch them?” I asked, immediately regretting the question.

“Oh,” he said, “we drive them out to the country and let them go.”  He actually said this with a straight face.  Unfortunately, he looked like he’d had a supporting role in The Terminator and that the back of his truck was filled with devices I didn’t want to know about.

Now here’s the problem: my younger granddaughter recently decided she wanted two pet rats, and persuaded her mom to take her to the local pet store to acquire some.  I told her father that there was no need for them to have wasted a single dime on this as I could have supplied as many rats – live trapped, health-screened, and overnighted – as they wanted.  I would even have felt my guilt assuaged a teeny bit, kind of like the White House pardoning a turkey every year.  (Let me tell you, that turkey should be buying lottery tickets.)

But by the time I heard about it, they had already acquired Velma and Louise, two alleged sisters. I say “alleged” because two days later, Velma (or was it Louise?) gave birth to 11 more rats.  Either Velma was getting it on with another rat after hours in the pet store, or Louise is really Louis.  Time will (quickly) tell.

But my granddaughter is absolutely besotted with Velma and Louise and has built them an elaborate multi-tiered ratopian habitat with toys, exercise wheels, swings, and every accoutrement a rat could ever want.  Rat World should do a spread.

When I FaceTime my granddaughter, she has Velma and Louise snuggling her neck, crawling around on her head, and otherwise being the cuddliest of pets.  She says their fur is incredibly soft.  She has even taught them tricks. Why, she asks pointedly into the phone camera, would anyone ever kill them?

Correct answer:  Because you have two and I have 500?

Still, Velma and Louise have really caused me to suffer a full-on attack of cognitive dissonance about our rat abatement efforts.

Truth be told, Velma and Louise are not the first rats who have caused me to feel bad about this. Several years ago, the son of my dear friend, “Carol,” had an adorable white rat named Cream Puff.

When Carol went through a horrible divorce, “Puff “ would lick the tears off her face at night as she sobbed into her pillow. One can never underestimate the power of pets to sustain people in times of sorrow.

A year later, a bereft Carol reported that Puff had been diagnosed with breast cancer. We’ll leave aside the obvious questions as to who treats pet rats (I have enough trouble finding vets for our birds) and how this diagnosis might have been made.  Routine mammogram? Self-exam?

But there were actually treatment options for Cream Puff, including surgery.  These days, if you can do it for a human, vets can do it for your pet. Carol agonized.

Some weeks later, I got a call from Carol. She weepily reported she was in the vet’s waiting room waiting to have Puff put down.  The treatment plan would likely cause Cream Puff considerable discomfort with no guarantee of appreciably extending her small furry life.

We cried over a memorial bottle of wine later that evening. And yes, it was really, really sad.

Sorry, rats. It all comes down to being invited. Velma and Louise, you should be buying lottery tickets too. 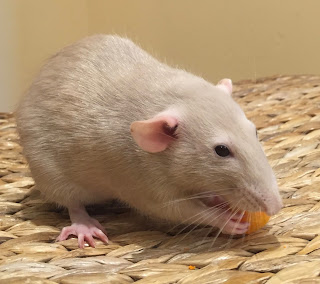