Like lots of families, it was Thanksgiving for Two at our house this year.

We could have eaten out. No wait, we couldn’t, unless we wanted to eat outside. Plus, Olof is really into the leftovers.

We needed a whole turkey since I like the white meat but Olof is a dark meat/drumstick guy. But this could mean more turkey sandwiches than even Olof would ever be able to eat.  (It did.)

When the meat department guy said he could order me an “8-10 pound” turkey, I was deliriously happy.

When I picked up the bird (10 pounds), the butcher said that they normally never had a single order for turkeys that small.  This year it was 90%.

While consuming our turklet, Olof and I opted not to dwell on the twin demons of Covid and electile dysfunction but to reminisce about the Thanksgivings we had spent in Stockholm when we lived in Sweden in 2005 and 2006.

Swedes are not all that familiar with turkey or even enthusiastic as to why an entire nation would consume a large carcass of basically dried-out meat.  Sort of like their reaction to baseball: “So the fun is the food?” they ask with puzzlement after attending a game.  This from people whose national sport is curling.  When we were there for the 2006 Olympics the government TV stations (all we had access to in our sublet) carried every last second of curling and not one second of figure skating.

One year, we were actually able to be part of a largely-authentic Thanksgiving dinner, courtesy of an American friend, Susan, married to a Swede. Susan had spent an entire week doggedly combing Stockholm for a turkey - very expensive and not easy to come by – especially one that would serve ten.  A side of moose would have been easier but it's not really in the pilgrim spirit.  I brought the "cranberry sauce" (made with lingonberries).

Usually if ex-pats are going to have a Thanksgiving dinner, they import the ingredients during a summer visit to the U.S.: stuffing mix, ingredients for pumpkin and pecan pies, cranberry sauce etc.  We ended up with a currant pie instead which was, well, interesting.  So it takes a little improvising to have Thanksgiving in Sweden, not the least of which was that everyone’s traditional recipes were in U.S. measures in Fahrenheit being prepared with deciliter measuring cups in small centigrade ovens.

Another American friend that year reported that she had invited 14 people to her apartment for Thanksgiving and had ordered up a 10-kilo turkey from a trendy Östermalm food store. That morning, she sent her husband and their baby in the stroller to pick up the turkey.  But when they got there, the trendy food store said, oops, all we have are two 5-kilo turkeys or one 16-kilo turkey.  Well, only having one small oven, they couldn't cook two turkeys, so the wife instructed the husband to get the 16-kilo turkey instead.  However, we're now talking the difference between a 22-pound turkey and a 35-pound turkey, and the husband couldn't fit the turkey and the kid in the stroller, especially as the turkey outweighed the kid by considerable.  So the wife had to come down herself to carry the baby while the turkey rode home in style.

Despite her careful measurements that the turkey would just baaaarrreeeely fit in the oven, it didn't.  Big crisis.  So she finally called the trendy food store back, buried them in invective, and demanded that they cook the turkey for her.  This being such a decidedly un-Swedish move, they actually acquiesced.  So the husband was assigned to load the now-stuffed turkey back into the stroller and lug it over to the food store, and ultimately to cart the fully-cooked version back to the apartment.  That turkey probably saw more of Stockholm than most tourists.

The U.S. Embassy in Stockholm always hosted an annual Thanksgiving feast for the American Women’s Club the week before Thanksgiving. The U.S. Consul told us that his last assignment had been in Afghanistan, and, wanting to host a Thanksgiving dinner for his staff there, he requisitioned a turkey.  When it showed up, it had a string around its neck and was running around in circles.  Ultimately, they ended up shooting it.

The Consul's wife, meanwhile, was German and so didn't grow up with Thanksgiving.  The Consul reported that after taking the bird out of the oven, he went to make the gravy not realizing that his wife had already put dish washing liquid in the pan full of drippings. She was incredulous that he was actually going to do anything with them.

Ja, Thanksgiving abroad. Great memories, and next year, hopefully family here again. Some Swedes would be really good too. 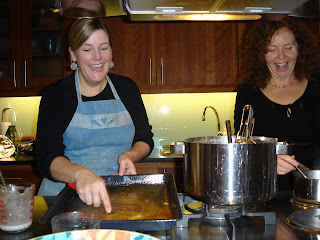 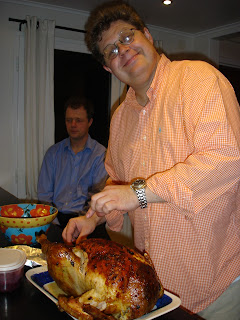 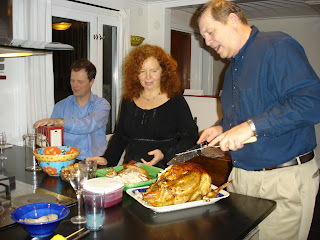 Olof taking on official carving duties
(that's my lingonberry cranberry sauce on the table)
Posted by Inga at 12:55 PM