Pandemics have always been a part of my family story.  While a lot of people are hearing about the 1918 “Spanish Flu” for the first time, my grandmother, gravely ill with it, gave birth to my mother on November 1, 1918, the week of the highest number of deaths worldwide: 55,000.  Yes, in a week. Miraculously, my grandmother was not one of them. But she was so debilitated by the flu that she was unable to care for her new baby for the first few months of my mother’s life.

I’ve already written several times about my siblings and I contracting polio in August of 1955 – four months after Jonas Salk’s jubilant April 12 announcement of a vaccine that would prevent it. It took a while for enough vaccine to be manufactured - there were some serious glitches along the way - and to reach the populace. Not soon enough for those of us in our small town, alas. So imagine getting COVID-19 vaccine to 327 million people who all wanted it yesterday.

Now, I realize that this pandemic situation basically caught the world off-guard but now, several months into it, but I continue to be puzzled at some of the inherently non-sensical ideas that those in positions of authority inflict on – or propose to inflict on - the general public.

Let’s start with hair salons.  First off, where’s Anthony Fauci’s pony tail?  Why doesn’t Gavin Newsom resemble a scruffy wombat?  Because someone is cutting their hair.  (Don’t even try to suggest it’s their wives.)  Meanwhile, the word “Roots” will no longer evoke the saga of Kunte Kinte but that of women’s hair during the COVID-19 pandemic.

I have read some truly idiotic proposals about the reopening of hair salons including that they should not be opened again “until there is a vaccine.” (See paragraph two, above.) By that time, everyone except top government officials will look like extras from “Planet of the Apes.”

Suggestions for reopening hair salons assert that blow drying will have to be a thing of the past.  Only a guy would say this.  Do they think that women’s coifs just dry naturally looking like that?  Allegedly, the blow dryer could blast corona cooties into the air around the salon where customers would start dropping like IRA balances. My stylist washes my hair twice for more than two minutes each time - way more than the 20 seconds recommended for hands.  My hair is so clean you could eat off it.  Not that I’d want you to, since then I’d need to wash it again.  So it’s hard to imagine how many COVID critters could really be flying around.

And if we’re going to get on the subject of blasting air, what about all those blow dryers for barely-washed hands in windowless public restrooms?  Given this logic, you’d be lucky to escape a bathroom visit with your instantly-contaminated life.

Moving right along in the Stupidity Sweepstakes was the CDC’s April 27 pronouncement that people should “avoid contact with your pet, including petting, snuggling, being kissed or licked, and sharing food or bedding.”  Sure, and explain that to Mr. Barkles. Pets were probably the single most positive factor in keeping people from total despair in recent months, yet based on pretty much zero cases of kitty-to-human infection, the CDC recommended people shun their beloved animals.  Even dogs are supposed to keep social distance from other dogs.  Fortunately, not much more has been said about this.  Just as there is a waiting period for people to buy guns, persons in positions of health or governmental authority should have a required three-day speech delay while their synapses catch up with them.

And then there was this whole business with one-way shopping aisles. It's like the COVID Police meet nightly and say, "How else can we provoke the general public, never mind grocery store managers, with rules that are unlikely to help but will just annoy the sh-t out of everyone?”  But then, I’m just mad because I accidentally walked past the spaghetti sauce and we had to have pasta with plain parmesan cheese on it.  It made me very grumpy.

There are so many candidates for this column that it's hard to choose.  But our Vice President, named to lead the U.S. response to the coronavirus outbreak, was apparently the only person in America who didn't know you need a mask to enter a hospital. Was he worried, "Does this mask make me look fat?" He then maintained that because he is regularly tested, he didn't think he needed one.  Yeah, just try getting past Gelson's cart kid with that one!

When the people who are allegedly managing this crisis are showing up perfectly coiffed, aren't staying home, and don't want to annoy themselves with uncomfortable masks, they undermine their credibility.  I'm still complying, but in spite of them, not because of them.

Meanwhile, next week:  With everyone having to wear masks, where is the bailout for the lipstick industry??? Inquiring minds want to know. 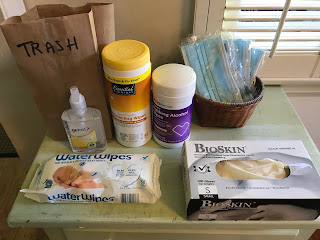 This table actually used to be used for mail. 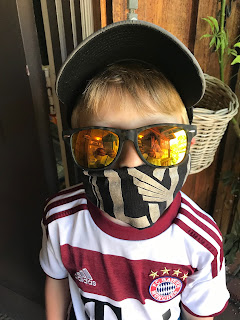 Five-year-old grandson getting ready for a walk 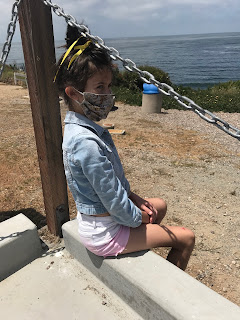