The Mysterious Habits Of Dogs

Like all people who have adopted a dog in its later years, you almost wish it could talk for five minutes and answer some of your most pressing questions about its behavior.  But then when you think about it more, you realize it’s probably best you don’t know how this dog came to be abandoned at the pound with a mouthful of rotten teeth and an abiding fear of male persons.

Lily was seven when she came to us as a “one week” emergency foster dog who had been rescued from the pound by a local agency.  It took her exactly three days to work her way into our hearts even though we had agreed that we would never (ever ever) have another dog after our devastation at losing our English bulldog Winston.  I think the foster agency saw us for the mushballs that we were.  They have great instincts that way.

$1,500 worth of dental work later, we bought Lily a basket of toys suitable for a 15-pound dog with three remaining teeth.  But we couldn’t get her interested in any of the them.  It’s like she didn’t know what they were and what she was supposed to do with them. She always just sniffed them and walked away.

Finally, I found her some small round rubber squeaky balls that did pique her interest but not as toys.  She would gather them up protectively in a group close to her chest, her paws around them, and lick them affectionately as if they were her pups.  She hadn’t been spayed when we got her, and we began to wonder if this adorable bichon-poodle mix had been a breeder.

From time to time visitors to the house, not realizing that these squeaky balls were offspring and not play things, would pick one up and throw it for her.  Lily would be enraged, chasing after it but immediately returning it to the rest of her litter and glowering at the guest.

“You just threw her child,” we’d explain to them.  “She’s very sensitive about it.”  They were always hugely apologetic.

But over time, we would notice that Lily would place one of her squeaky “pups”, as we called them, right in the middle of a doorway where we would invariably step on it. Seriously, it scared the s—t out of us every time.  She’d then come racing over and claim it. But the next thing we knew, another one would be in another door way ready to be squashed.  She’d obviously had some very ambivalent experiences with mothering. I can remember a few like that myself.

But after we’d had her for two years, it was almost as if she’d lost any maternal memories whatsoever.  This was a relief for us as no one wants to step on anyone else’s kid. Never mind that our aging hearts just weren’t up to sudden stoppages. She began dropping a pup in front of us and seemingly wanting us to throw it for her so she could retrieve it and bring it back.  It was like some other dog on the bike path had clued her in on how it was supposed to be done.  The game was called “fetch” and was built into the code of dogs.

Now, I have read that dogs don’t see color but I can attest that this is not so.  Lily has a full set of six Squeaky Pups in different colors but her favorite child is definitely the green one.  In fact, one could almost call doggie social services for the lack of attention the other five pups get these days.  They’re strewn around the house, ignored.  At this point, Lily refuses to come to bed at night until Green Squeaky Pup has been located and is prominently placed on her blanket on our bed.

If it is not immediately locatable, she runs around the house looking on top of – or under - sofas and beds in a frantic search to find it.  Fortunately, I have one of those grabber gismos so I can fish it out from otherwise inaccessible places because Lily is willing to whine – and alert - for hours if Green Squeaky Pup is marooned where she can’t reach it. Attachment is attachment.

We’ve accepted that even though Lily is our emotional support animal, we are second to Green Squeaky Pup in her feelings.  Fortunately, Muttropolis keeps them in stock as the balls do eventually lose their squeak and need to be replaced by Son of Green Squeaky Pup.  Would that my children’s favorite blankets and stuffed animals had been so replaceable. 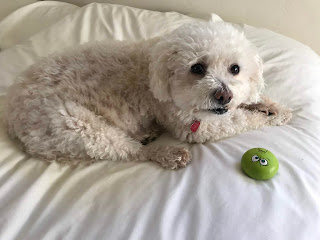 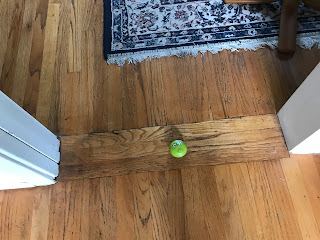