It Was Such Bad Timing

Last year, I wrote about my husband, Olof, taking up sourdough bread making as a retirement project.  So when pandemic incarceration hit, Olof wasn’t all that distressed to have yet more excuses to wallow in yeastdom. Nightly he was glued to YouTube videos for sourdough English muffins, crackers, and even naan besides his usual boules and ciabattas.

But then disaster struck. In late March, the control panel on our stove suddenly, without warning, exhibited the Black Screen of Death, followed by “Error message F2 E1”. We flipped the circuit breaker to no avail. Olof advised letting it sit overnight to see if it “fixed itself.”  I was stunned.  I’m usually the one who maintains that electronics have an emotional life and can be cajoled into functionality if properly entreated, while Olof, whose degree in reactor physics is from Cal Tech, rolls his eyes and expounds on the certainties of circuitry.  “Olof,” I said, “I think you’ve been married to me for too long.”

The next morning, the stove was still as dead as the night before, but worse, had developed a truly annoying intermittent beep. Honestly, in the middle of the night I wanted to take a sledge hammer to it.  Fortunately for it, we do not own a sledge hammer. Unfortunately, the circuit breaker is also attached to fridge so we couldn’t just flip it off.

Now, we have several appliance repair people that we’ve used over the years but none would come to the house. I mean, you’d think this was an essential service.  It is, but not essential enough for the essentialees to want to risk coronavirus. I was pretty sure the problem was the oven control panel since we’d had this problem once before but it turns out the Whirlpool factory, from whence oven control panels come, was closed until further notice.

Fortunately, we own both a crockpot and a microwave so there would be sources of warm food.  But the idea of not having a stove for potentially months put Olof into full yeast-deprivation depression.  We decided to just go buy a new stove.

Alas, Home Depot’s options were back-ordered into the next millennium.

Our other usual appliance emporium was now only accepting on-line orders – you couldn’t go into the store itself – and were not installing.  They would deliver your large kitchen appliance to your garage (we don’t have one), or alternatively  “curbside” which, translated into English means “in the street.”  Where a car could hit it.  And certainly not improving the functionality of the appliance especially if it is now on the next block.

Then there's the more-than-minor problem about getting this curbside appliance into our home which includes a long walkway and several steps.  We're both pushing 73. My husband had a heart attack two years ago. So the two of us wrassling a heavy appliance box from the street into our house might not be an exercise that we would survive. We would, of course, instruct our children to sue the appliance place for premeditated wrongful, elder-abusive death.

OK, so let's assume that we were actually able to get the new stove into our house and into our kitchen. It's a gas stove. Gas stoves are connected by means of something called "gas lines."  I can just see getting the whole thing installed only to turn it on and blow up the house.  And ourselves. It just seems that the appliance company ought to be a tad more concerned about the liability in expecting people to install their own major appliances.  COVID-19 will eventually go away but personal injury lawyers are forever.

But then my pool guy (it is a testament to the times when your pool guy is telling you how to get your stove fixed) Scott told me that any part I needed for anything was available on the internet if I had the model number. He cautioned me to make sure I wasn't buying an aftermarket or "refurbished" part, but a new one.

$400 and expedited shipping later, a brand-new oven control panel arrived at our home from a non-Amazon site, and I had actually incentivized someone to come and install it.  But when he did, it turned out that while it was the correct control panel for our stove, that wasn’t what the problem was.

The repair guy said he would to see if he could find the required part for us. But who knew how long that would take. However, he was able to disconnect the homicidally-annoying beep.  I spent 1.5 hours on hold with the company I got the control panel from trying to get approval to return it. At the mailing place, they were only allowing one person in the store at a time even though it was pouring.  Does weather-related pneumonia count as a COVID-collateral death?

Two slow cooker weeks later, the appliance guy came back with the part.  Our stove came back to life after more than a month. Five minutes later, Olof was baking garlic rosemary crackers.

It’s given us perspective. Our worst fear is no longer coronavirus.  It’s our appliances breaking. 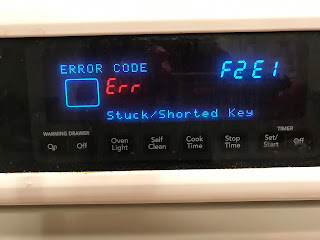 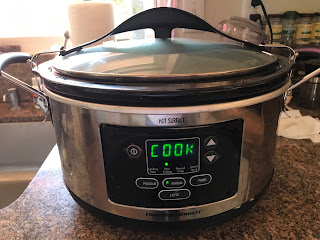 Our daughter-in-law presciently gave us a slow cooker
several Christmases ago.  It saw a LOT of action. 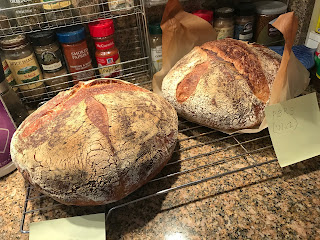 After almost five weeks, Olof's Artisanal Boule Bakery was back in action. 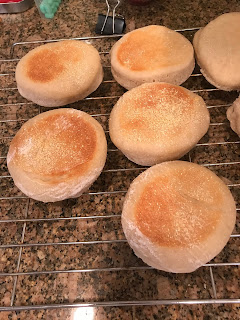 In a frenzy of newly-functioning-stove baking, he made his first ever
sourdough English muffins 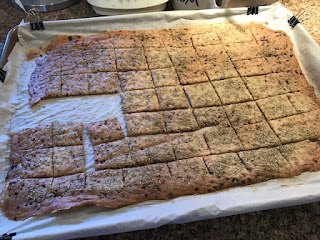 Garlic rosemary crackers were in progress before
the repair guy even reached his truck
Posted by Inga at 1:45 PM