When you look at our idea of excitement now, it’s hard to believe that Olof and I met 50 years ago as intrepid 17-year-old adventure junkies spending our senior year of high school in the Amazon.

How times change. This summer, the celebrations we had for both our 20th wedding anniversary and Olof’s 68th birthday caused our younger son Henry to drily observe: “Now don’t get too crazy.”

Henry had tried to talk us into doing something special for our 20th anniversary. Maybe a trip to Europe, he said. Actually, our celebration stayed a little closer to home. We sat outside in our Adirondack chairs drinking a really nice bottle of champagne, watching the sunset, and reviewing all those betters and worses that we so naively agreed to two decades ago. Then we had an extra-large anchovy pizza delivered to the front yard. It was the best anniversary ever.

The evening satisfied all of our current criteria for a successful celebration:  (1) we didn’t have to get dressed up (2) we didn’t get in the car, and (3) somebody else cooked it. We’re SO easy to please.

Not that this celebration did take at least a little planning. Annoyingly, fewer and fewer places make anchovy pizza anymore. Half the time, it comes with artichokes instead because they didn’t really believe you really wanted what is uncharitably referred to as a “bait pizza.”

Anchovies get no respect. People won’t even let you have anchovies on your half of a pizza, insisting the anchovies will contaminate theirs.  When we order Caesar salad at a restaurant, the waitress will ask if we want anchovies, already noting “no” when we respond “heck yes!” (Somebody has to eat up all those dusty cans of fish that restaurants keep around just in case.) Finding – and even better, marrying – a fellow anchovy lover has been one more plus in a long list of compatibilities.

A few weeks after our anniversary was Olof’s 68th birthday.  When asked what he wanted to do for the occasion, he replied "bake a cake,” something that has been on his bucket list for a while. Mostly I think he wanted to haul out the Lamborghini of stand mixers (it even grinds meat!) he bought to make cookies for my book launch last December. Olof has baked exactly twice in his life: the first time two years ago to try to recreate his family’s Christmas cookie recipes from his childhood, and the second time to make cookies for my book event.

The Christmas cookies resulted in a column called “How an engineer makes cookies” that won a first place at the Press Club awards. Olof baking has to be seen to be believed. The spreadsheets! The flow charts! A re-formulation of the recipe into engineer-speak with headings like “Integration of Components.”  Who knew a degree in nuclear physics could have such practical applications?

Of course, his other motivation in baking a cake was that he wanted a chocolate cake that included raisins – impossible to find unless you bake it yourself. My dear friend Susan perfectly expressed my sentiments about raisins in chocolate cake:

As much as I am a "live and let live", freewheeling kind of gal, I'm afraid I too must draw the line at chocolate cake with raisins.  My position is that the raisins are taking up valuable real estate better served by, say, more chocolate.  Replace the raisins with chocolate chips and we've got a date.

After considerable research, Olof modified an Ina Garten recipe to his specifications which in this case included the addition of TWO CUPS of raisins. I thought it came out beautifully (if seriously raisin-y).  I always take a photo of Olof holding his birthday cake that indicates how old he is. This year, just to add a little hilarity, we switched the candles around for some of the photos to say 86 instead of 68. We’re such cut-ups. Laughed ourselves silly. This is where the kids start rolling their eyes. Sorry kids: fun is where you find it.  We all have to keep it fresh in whatever pathetic ways we can.

Amazingly, Olof made this first-ever cake totally on his own with only a couple of minor assists from me, like How to Turn On The Oven. Nuclear reactors are a cinch compared to the controls on our massively-nonintuitive stove. The only person who can figure it is our tiny granddaughter, who turned off the Thanksgiving turkey two Thanksgivings in a row.

It’s still a few months until my 68th birthday where we’ll probably have a celebration of a similar type. Maybe go wild and crazy and order in Chinese food. But as far as our anniversary and Olof’s birthday celebrations are concerned, for the moment we’ve had all the excitement we can stand. 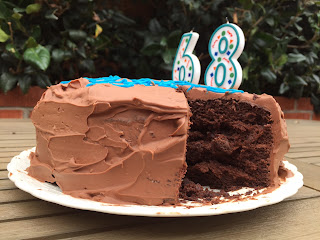 Seriously raisin-y cake
﻿
Posted by Inga at 8:44 AM