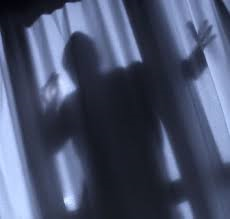 ﻿
It’s Halloween time and the season for scary stories. I just happen to have a few.  It was 9:00 p.m.one October night and I was processing Cub Scout badges at the dining room table while my 10-year-old, Henry, sat opposite doing homework. My irrepressible adopted older son, Rory, age 12, was presumably asleep after being banished earlier for a now-forgotten but at the time tragically common act of misbehavior.

Henry and I heard it at the same time: someone was on the front porch. We looked at each other with alarm. As a single parent, I was fortunately religious about keeping the doors locked.
“Who’s there?” I inquired, trying to sound calm.  No answer. Instead, the person was trying the doorknob. We could see it moving back and forth. Henry and I both froze.
A few seconds later a flashlight beam came from the porch through the closed shutters. They couldn’t see anything but it was disturbing that they were trying.
“Henry,” I said loudly, trying to control my quaking voice, “tell your father to get the gun while I call the police.” We obviously had no gun. (Short on men too.) This was also when everyone still had land lines that were firmly attached to land, er, a phone cord. In another room.
Instead of departing, we heard the intruder come down the porch steps and go around to the living room side, rustling through the bushes. The flashlight beam came through the closed shutters on that side as well. And then to our horror, we could hear someone trying to pry open the window. About ten years of my life expectancy evaporated on the spot.  Henry and I were both shaking in terror. All I could think of was: must protect the kids. I pointed toward Rory’s room and whispered urgently, “Wake up Rory and go out the back door to the neighbors!” Henry was gone like a shot while I ran for the phone.
A moment later Henry was back. “Mom!” he cried. “Rory’s gone! And his window is open!”
Oh, no! This was even worse than I thought. They’ve already got one of the kids!

But then a moment of clarity in all that panic. I walked to the front door and threw it open to find Rory tapping ominously on the living room windows with the barrel of the flashlight, happily starring in his own personal Halloween horror movie. I honestly think I would have been acquitted of justifiable homicide at that moment.
“Darn!” he said with a big smile, disappointed that the jig was up. “How did you figure out it was me?” He had loads more stuff planned. As I wrote about in some detail in my book, Rory looked for excitement.  And found it. There was nothing he enjoyed more than terrorizing adults, with a particular fondness for scaring the bejeezus out of Mom.

On another occasion, Henry and I were watching TV around 8 p.m. on a November night; Rory was due home from a school function at 9:00. I thought I detected a moving shadow out on our patio but when I looked again it was gone. To get into the patio, one would have to have a key or scale a six foot tall locked gate. Must have been a reflection from the TV, I decided with some relief.  But then suddenly a figure appeared at the glass door to the patio and stood there, silhouetted in the dark, not moving, just staring at us. Henry and I both stopped breathing. “Mommmm,” wailed Henry. But then something looked vaguely familiar about that silhouette.  I got up and walked over to the door and snapped on the patio light. Rory.
“Geez, Rory, why did you do that?” I said. I don’t know why I bothered to ask.  His school function had let out early and rather than just walk in the front door with his key, why waste a perfectly good opportunity to terrify Mom?

On yet another occasion, after multiple threats (Rory could push any limit), I ejected the wretchedly-behaving 14-year-old Rory from the Boy Scout car pool on the sidewalk a half a mile from home at 8:30 p.m. He needed to know I meant it when I said cut it out. But punishing Rory had always been an uphill battle. Sent to his room for a time-out as a child, he would open his windows, pound on his bed with a tennis racket, and yell “Please stop beating me, Mommy!”  Or worse: “No, no, don’t touch me there!”

When Rory hadn’t arrived home at 9, then 9:30, then 10, I started to panic. Henry and I drove the route he should have walked and every other street parallel.  At 10:30, as we walked up the front steps, I said “I’m going to call the police.” That’s when Rory popped out of the bushes where he’d been all along, listening to me freak out for the last two hours. He was more than a little annoyed that I hadn’t called the police sooner. It would have been like, totally cool to watch the police come and take me away in handcuffs for child endangerment. Two hours in the bushes for nothing! Not even Miranda rights! He may never have gotten the police to come with all those tennis racket incidents, but it was never too late to try. It had been fun, but time for bed.

Halloween itself has always been so tame in comparison.