Recently, we spent four days in L.A. babysitting our grandchildren – 5, 4, and 14 months – paroling our son and daughter-in-law for a much-needed get-away.  Overall it went well. There were, however, three heart-stopping episodes but fortunately nothing that could not be resolved by either (1) acetone (2) phenobarbital or (3) the realization that the house wasn’t on fire after all.

Fortunately, we were provided the assistance of a babysitter as Olof and I were clear that we were not up to the task on our own. Each of those kids has more energy than Olof and I have combined. Further, the 14-month-old, like all of his ilk, is positively drunk with happiness at his new mobility and makes a break for the nearest object of peril the second you take your eyes off him. He needed one-on-one.

And so we arrived in L.A. with our dog Winston. Now, you may remember that Winston is actually their dog but he has spent so much time at our house that in January we took official ownership of him. Our son and daughter-in-law adore Winston – he was their wedding gift to each other eight years ago – but like most English bulldogs of his age, Winston has developed increasingly serious and time-consuming medical problems.

Concurrent to Winston’s health woes, my daughter-in-law and two friends started a YouTube channel for moms with young kids that has been so successful that it has been featured on Good Morning America and the Today show; their thrice-weekly video site has 15 million views a month. They are delighted, of course, but my daughter-in-law’s overstretched life could no longer accommodate urgent veterinary appointments with three tots in tow.

Now, normally the older kids would have had summer activities for part of the day but these had mostly ended. So we arrived with plenty of projects planned. We made homemade slime (borax, Elmer’s glue), planted herbs in little pots, read tons of stories, watched all manner of endearing theatrical performances, mediated the usual number of “He’s being mean to me!” altercations, tried to explain that in checkers you either have to use the red squares or the black squares but not both, and otherwise enjoyed our time with them.

At 5 a.m. the second morning we were there, however, there was a sudden loud blast from the smoke alarm in the hallway right outside the kids’ bedrooms. Let me tell you, that will get your adrenaline going. Fortunately, the blast stopped as quickly as it started. There was no smell of smoke, and we recalled that our smoke alarms had occasionally, maliciously, done this as well. It’s like smoke alarms get bored and decide to toy with you.  (It’s not the same noise as the low battery indicator water-faucet-torture beep that smoke alarms make - also maliciously - at night.) But anyway, false alarm – but no coffee needed THAT morning. We were seriously awake.

The second night we were there, after everyone had gone to bed, I was horrified to find Winston having a seizure. Fortunately, my arsenal of Winston medications included some doggie phenobarbital that my daughter-in-law had bequeathed me. Since Winston has only ever had a seizure at his L.A. home and not ours, he had obviously become sensitized to something at their house during the last two years while he was mostly living at ours.

Now, Olof and I had to concede that a seizure for either human or canine was not an altogether inappropriate response after a day with three kids five and under. But the kids are incredibly gentle with Winston and there are plenty of places in the house he can escape. My theory? The L.A. folks eat mostly organic and use all green cleaning products. Maybe it’s too much of a shock for Winston’s aged immune system to go from our house where we don’t eat organic and the cleaning products are toxic. Definitely a puzzle.

On the third day, the two older kids were giving me a mani-pedi while Olof was on toddler-stalker duty. Granddaughter accidentally knocked over the whole bottle of Mommy’s special bright red nail polish on the light colored kitchen floor. When the sitter tried to clean it up, it only succeeded in expanding it onto a nine inch diameter red blob which was impervious to kitchen cleaning products. We Googled “nearest hardware store” and dispatched Olof to acquire acetone and Magic Erasers which fortunately did the trick. Whew! That one was going to be hard to explain to Mommy! And if she asks if I’ve seen her red nail polish, I’m going to plead the fifth.

So: Mom and Dad are back home, we and Winston are back home, everyone survived, and a good, if exhausting, time was had by all. Now Olof and I are thinking of our own four day retreat. We’ve earned it. 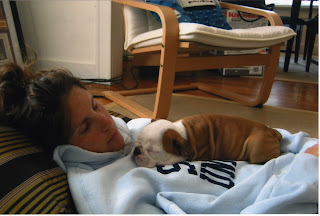