There are infinite numbers of things that can go wrong with your computer. And Microsoft thinks of new ones every day.

I have a personal hate-hate relationship with all things technical which includes computers, software, cell phones, and the entire workforce of Time Warner Cable. I am suffering from serious technodespondence.

I really don’t do anything that weird.  I’m very careful about what emails I open, have good virus protection, rarely sext, don’t do social media or download videos.  So it is truly unfair that I’m dealing with as many techno problems as I am.
Even ten years ago, if your computer was working fine on one day and you didn’t mess with it, it would be working fine the next day too.  Not anymore.


Unsolicited updates (that would be you, Microsoft) and undesired upgrades (Internet Explorer anyone?) are the curse of the modern world. They guarantee that whatever worked before will never work again.
For example, all of a sudden these red circles with white exclamation points started appearing on my desktop files.  Not a good sign. Many aggravating hours later, it turned out that I needed to go to McAfee, my virus protection software, and select Disable Icon Overlays in Windows Explorer.  But I never enabled them in the first place!  Turns out to be some stupid McAfee upgrade that I didn’t ask for that alerts you that this file is not backed up. Like, I need to be tortured by my own virus software?
On my iPhone, I accidentally upgraded to iOS7. I began to notice that I was missing most of my calls – it often wasn’t ringing even when I was holding the phone in my hands.  My daughter-in-law finally explained that iOS7 had activated “Do not disturb,” as an “upgrade” (hah!  HAH!) that keeps your phone from ringing if you’re in “sleep mode” (which apparently happens after you haven’t used the phone for about seven seconds).  Of course, I didn’t actually activate it because I had never heard of it, wouldn’t know how to activate it and didn’t want it in the first place.  Because it was eating all my calls!  Worse, it kept coming back! A stealth app.  Gaaahhh!
On-line “Help”, alas, doesn’t speak English.  (Actually, human help usually doesn’t either.) You have to know what you did to undo it.  (See “icon overlays,” above.)
For most new software, there IS no tech support (we’re talking about you, Google), other than “community groups” for which you are depending on the kindness of totally inept strangers. My experience with community groups is:

(1) nobody answers your question
(2) lots of people answer your question but none of the solutions help
(3) I can’t understand any of the solutions
(4) the solutions will mess up my computer to the point that the original problem will seem insignificant.
Change one little thing on your computer and it’s like the butterfly in Australia that flaps its wings and causes tornados in Kansas.  Trying to fix it changes enough things to add monsoons in Asia.

I have a mug that says “The chief cause of problems is solutions.”  I believe it fundamentally.

Error messages, meanwhile, are a cruel psychological test. The one thing you can be assured of is that whatever it says is NOT the actual problem.

It goes without saying that if Olof crumps before I do, I’m going to have to throw myself on top of his coffin and let them pile dirt on top of me. This is my worst fear, being left alone with my electronics. Every new appliance we get is more terrifying than the last.  In my nightmare Olof-less world, the grandtots mess up the remote and I never watch TV again.  Because who do you get to fix that stuff?  Messed Up Remotes R’ Us?  THIS, unemployed twenty somethings, is the career of the future.
I just can’t keep up.  I don’t WANT to keep up.  I just want everyone to leave my electronics alone.  I don’t want those 22 Microsoft “Updates” to automatically upload (download?) on my machine when I go to turn it off. I know for a fact that there are evil forces contained in them.
And I want to opt out of all cloud-related activities.  Sunshine only!  I want messages that go from here to there without stopping on some intermediary planet.
If I were president, I would make it a law that no software can be released that isn’t supported by actual humans who:
(1) answer within 15 minutes
(2) can speak English understandable by 95% of native English speakers (meaning no one from either India or Alabama)
(3) actually understand the product.
If software should be introduced without tech support:
First offense: $1,000
Second offense: eight billion dollars
Third offense:  hanging
I’m serious. 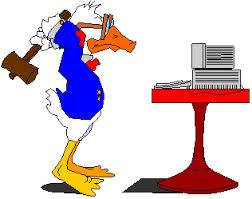