**Looking A Gift Dog In The Mouth

If there’s one problem I’ve never really worried about, it’s my dog’s dental care. That would probably be because I don’t have a dog. Or didn’t anyway. I’ve written about our granddog Winston a number of times before because even though we technically don’t own a dog, Winston, for a variety of reasons, has spent a LOT of his eight years at our house. At this point, we suspect he’s not going back home.


Such are in-bred health problems with English bulldogs that Winston has supported a wonderful La Jolla vet in addition to one in L.A. While Winston was under anesthesia recently to remove a growth in his jaw, our local vet suggested adding a dental cleaning. When Olof heard that Winston would be unconscious for his teeth cleaning, he commented enviously, “Is there any way I could get that too?” Despite incredibly hazardous flying as an Air Force pilot, Olof is not a big fan of sharp instruments in his mouth.
Our vet mentioned when Olof collected Winston that “we” should really be brushing Winston’s teeth at least three times a week. I put “we” in quotes because when Olof reported this to me, I was very clear who “we” were.  “No problem!” I said. “I’ll put it on my list. BTW, if you notice your tooth brush smells a tad kibbley, that’s probably why.”


But this prompted me to research doggie dental care, which I am not disputing is important. Just as with humans, poor dental care can lead to all sorts of health problems.  It’s opened up a whole new world for me, one that I find usually requires a glass of chardonnay. This is especially true when perusing such topics as Picking the right toothpaste for your dog. (It can’t be human toothpaste. BTW, you need doggie toothbrushes too.)
Maybe if we’re going to keep this dog, we should be signing up for ObarkaCare.


Googling How to brush your dog’s teeth gets you lots of understated advice such as Your dog may not go for tooth brushing at first. You think?
Hopefully, the site continues, you can make it a reasonably pleasant experience for both of you. I know I’d have to be on my second glass of wine to consider brushing the dog’s teeth a pleasant experience, and I have no idea what it would take for the dog.

Start slowly, they continue, and quit if the dog gets agitated. If there’s one thing I’m clear on, it’s that I’m not putting my hand into the mouth of an agitated bulldog.


But not to worry: Before long, your dog should start looking forward to the event. I so don’t think that’s happening, considering his general unhappiness with ear reaming and facial fold de-goobering.
Symptoms you should look out for:  (1) bad breath  (2) depression (3) excessive drooling.  (His or mine?)


Your vet may refer you to a veterinary dentist. Ack! No!  We can hardly afford OUR dentist.
If you notice your dog’s adult teeth are crooked, he may be suffering from malocclusion. Don’t even say the “m” word out loud to me! I know all about malocclusion from the orthodonture bills of two kids.


The veterinary dentist won’t give your dog braces, but he has ways to realign the teeth. Sounds like braces to me! (Is there doggie Invisalign?)
Turns out that not a lot of other people want to brush their dog’s teeth either. A friend took her dog to place that does this for $99 (upfront). The dog wouldn’t open his mouth but the place wouldn’t refund her money. I guess the pet’s early obedience training didn’t include the command “open wide please.”


I’m thinking canine dental care could be a problematical pet problem, just as our neighbor found when advised to apply sunscreen to the nose of his cat who had developed skin cancer there. (The video would have gone viral on YouTube.)
“So,” said my husband Olof, as I was recounting my newfound knowledge, “shouldn’t you be flossing his teeth as well?”  I laughed, until I Googled it.  (Tip: NEVER Google information you don’t want to know.) And sure enough, yup, if you really cared about your dog (and you had absolutely no life whatsoever), you should be flossing too.  I did notice a warning sign pop up announcing, Don't floss the teeth of a dog who has a history of biting or growling as you approach his food or other possessions. I think that is extremely good advice. And then they added, To avoid residue buildup in his mouth, use canine popsicles as treats. 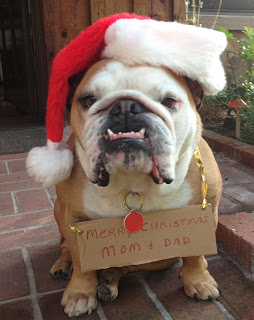 Winston: No, I don't want my teeth brushed