Now that Olof and I are retired, people often comment how nice it is that we’re free to travel. Where air travel is concerned, however, the romance is long gone, especially for my husband. It’s not that we don’t travel but we have to really really want to go.
In January, I wrote about the 50th anniversary of Olof and I meeting as foreign exchange students spending our senior year of high school in Brazil. June 3 was our 20th wedding anniversary. (We didn’t want to rush into anything.)

For the eight years prior to our marriage, Olof commuted from San Jose to San Diego on weekends. (Still not rushing into anything.) At our wedding in 1995, we joked that the ceremony really should have been at Gate 25 of the American Airlines terminal. Because that’s where I was standing for some 400 consecutive Friday nights waiting for him, often with kids in tow, unless it was a Dad’s house night.

Of course, in our 1987 to 1995 commuter era, you could still go to the gate to meet arriving passengers. Olof always got off the plane carrying a single red rose for me.

A fellow mom friend whose business traveler husband would frequently arrive on the same flight as Olof said to me, “Would you please start picking up Olof at the curb? You’re making me look bad.” And the husband said to Olof, “Would you stop with the roses already? Every guy on this plane hates you.”

While Olof was logging several hundred thousand commuter miles flying between San Jose and San Diego, I had plenty of opportunity to conduct some rigorous empirical research on the habits of air travelers. Among the observations noted in my journal at the time:

The first 80 people off any plane are not being met by anyone. When the plane is announced for final approach, it has just passed San Clemente. If you’re late getting to the gate, the person ahead of you at security will have had metal surgically implanted in his body.  Three-hundred people get off a plane that seats 140. The first 20 bags on the carousel do not belong to anyone who arrived on the posted flight. In any 15-minute period, always at least one person at each parking toll booth is outside his car, on hands and knees, looking under the seat for his parking ticket. Lastly, arrival and departure monitors lie.

It must have been love all those years because the return trip on Monday mornings was brutal for two not-morning people. For Olof to make his 6:15 a.m. flight, we’d be up by 4:00. Olof would carry the blanket-wrapped sleeping kids out in the pre-dawn darkness and strap their comatose little bodies into their seat belts. When I got home from the airport, there was usually anywhere from 45 minutes to an hour before the kids had to be up for school and I had to go to work. Since I couldn’t lift them, I’d sometimes just snooze in the car in the driveway with them until it was time to wake them up. Other times, I’d try to sleep walk them back to their beds, so I could crash on my bed for 45 minutes of what was truly the sleep of the dead. The kids were always surprised later to learn that they’d gone to the airport and back. They weren’t morning people either.

Even 20 years later, I often muse happily, “It’s Friday night and I’m not headed to the airport.” If I were ever awake at 4 a.m. on Monday mornings, I’d probably be noting the same thing.

Giving up the commuting life was absolutely the best part of our early marriage.  Friends had suggested years earlier that I jettison the kids and move to San Jose, noting that Olof was not a man I should let get away. But I was attached to the kids. More to the point, so was Olof. If there were an Olympic medal for youth sporting events watched of children to which one was not biologically related, Olof would have the gold.

Of course, moving to San Diego hardly eliminated Olof’s travel life. Always a frequent business traveler, often to foreign countries, he’s logged close to a million business travel miles in our marriage, including two years when he worked a contract in Dallas and left the house at 3:45 a.m. every Monday morning and returned at midnight every Friday night. Our whole lives operated on Texas time for that period since he was never here long enough to get back on San Diego time.  During the 20 years we’ve been married, airline travel has only become more abjectly miserable – not exactly an incentive to fly.

So when friends say, “Any travel plans?” We’re happy to happily announce in unison: Nope! 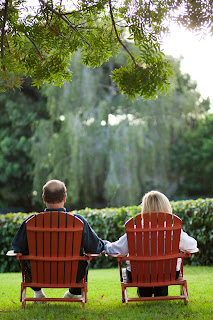 Our plans for retirement
Posted by Inga at 6:13 PM