We’re clear that our highly-used lawn may soon be a thing of the past. We’re already mourning it and contemplating what we’re going to do that doesn’t involve the five grandtots dodging cactuses in the front yard.

I can’t help but observe that people who are most vocally anti-lawn don’t have one. Also that they’ve never seen a garden of “native plants.” If the plants are attractive, they’re native to somewhere else.

Over the years, the San Diego Union-Tribune has published the recollections of one Mary C. Morse who arrived by ship to then-wharfless San Diego on July 5, 1865:  Her first impressions?  Oh, the strangely foreign look as I stepped from my state room, and stood on deck, as the steamer came to anchor! The hills were brown and barren, not a tree or green thing to be seen. A most desolate looking landscape!

Want to recreate the look? Drive on I-5 through the Pendleton Marine Base.

Forget the first Gold Rush. I’m guessing the folks who made early fortunes in California were in irrigation.

But the fact is, for the moment at least, California is out of water. In the 42 years I’ve lived in my house, we’ve tiptoed up to this point a few times before in previous droughts.  I have photographs of the house I took in February 1991 when we were facing 50% water cuts labeled “Last green lawn ever?”

All of us who thought we moved to San Diego are facing the cruel reality that, climate-wise, we may have moved to Vegas. It’s not easy to change the mindset. However, one thing I’ve noticed over the past 42 years is that no matter how much or little it rains or how much you conserve, water rates just go up. There’s no winning the water game.

If your yard is purely decorative, there’s plenty of options. But what if you actually use it for lawn-like activities?

Years ago, in similar drought circumstances, we decided to let the kikuyu weed take over our yard. Google kikuyu and you’ll find plenty of places that will be happy to come out and kill it for you. Instead we said, “Have at it!” Given that it’s a weed, it’s drought resistant and manages to stay green for much of the year. Not nearly as nice looking as the tall fescue we started with but it provides a nice spongy padding when tiny persons learning ambulatory skills do face plants on it.

I read a suggestion recently that unused lawns should be mandatorily removed. So, can we submit a video? Grandtots toddling? Dog fetching? Olof and I reading in our lawn chairs? Our backyard with its pool and brick patio are poor play places for tiny kids and a non-swimming dog. All that flat green space in the front is perfect, as it was for our own kids.

Kikuyu, survival-of-the-fittest border plants, and only-as-needed watering have comprised our water conservation efforts for years. It isn’t as though we haven’t looked at other options too. Artificial turf comes in a variety of qualities. But if your goal is to have a play area for kids, synthetic grass gets very hot in the sun and is really abrasive.  Further, the estimate we got for a better quality fake grass would have paid our current water bill for 13 years. Life of fake grass: 10.

I don’t know what the local zoning says about planting vegetable gardens in your front yard but they do take water. And more to the point, I’m not called The Black Thumb of La Jolla for nothing. (We still joke about the $53 tomato.)  And it wouldn’t give the tots any place to play.

What we mostly don’t want to do is spend $20,000 or more putting in something that we’d want to take out again if the next diluvian phase begins. I have pictures of my front and side yards literally under eight inches of water in both the ‘82-‘83 and ‘97-‘98 El Niños. Just when you think it will never rain again, it sometimes does. (Like in 1991.)

So for the time being, we’re planning to limp our weed patch along with minimalist watering.  It may well turn brown. It’s not ideal but we remind ourselves the grandtots can still cavort on dead grass. Olof and I could still read outside with face masks in our little dust-bowl-to-be. Granddog Winston would probably be thrilled as grass makes his paws itch anyway.

And just so you understand how seriously we are taking this, Olof has engaged in the ultimate act of water conservation.  He’s no longer putting ice in his Scotch. 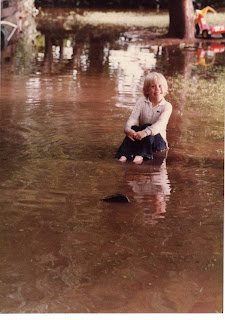 The opposite of drought: our front yard during the 1982-83 El Niño﻿