They Regret Any Inconvenience

After our flight to Boston was delayed in 30 minute increments for eight hours only to be cancelled, it occurred to us that the reason TSA confiscates guns and knives isn’t just to thwart terrorists but to protect the gate agents.

I wrote recently about how Olof and I only travel these days if we really want to get some place. The knee room is ever smaller for the 6’3” Olof. The coach seats on long distance flights are brutal for someone like me who had polio as a child then had her spine rearranged several years ago by a drunk driver.

So when I contemplated attending my 50th high school reunion on the East Coast and visiting friends on Martha’s Vineyard beforehand, Olof and I agreed we would only go First Class in spite of the cost.

Our previous attempt at First Class was a $6,000 Business-First ticket (First Class to East Coast, Business class internationally) to the UK on United for a surgically-recovering Olof. On the day of travel, weather was great, plane was there – but no flight crew. By the time the flight was cancelled, United’s premier coach passengers had already been upgraded to all the First Class seats that day. Olof’s only domestic option (besides waiting two days) was a non-reclining middle coach seat in the last row of the plane next to the bathrooms seated with a woman humming gospel tunes on her iPod. Poor Olof suffered horribly (on multiple levels).

But, we decided, that was just bad luck. Although actually, our flight before this most recent one had been bad luck too. Our United flight to San Diego lost pressurization at 30,000 feet and was diverted for an emergency landing. But that wasn’t even the bad part. 150 seriously traumatized passengers were shunted over to United’s glacial CustomerCare (oxymoron) desk which is the real life embodiment of the Nine Circles of Hell. It’s ten minutes to re-ticket each passenger, partly because of agent ennui but mostly because there are no seats. Every flight flies full, or over-booked. You start to wish the plane had gone down.

On this most recent trip, we arrived in Chicago at 11:30 a.m. on our First Class San Diego to Chicago to Boston to Martha’s Vineyard itinerary only to find that our Boston flight posting a two hour delay due to “maintenance.”  (No weather delays.)  The only First Class seats left were on the last flight of the day leaving at 7:15 p.m. which we booked as backups. At 6 p.m. (see 30 minute increments, above), we’re lined up to board a long-awaited replacement plane. But we don’t board. Oh no!  The new plane now has “maintenance” problems too! (How????? It just landed!!!!) Another two hour delay is posted. So we hustled some 30 gates to a different concourse for the 7:15 flight only to find pandemonium (two different flights trying to board), no gate agent, and finally the news that our confirmed seats had been given away (presumably to upgrade passengers). Only option: stand-by for coach. We’d left our house at 4 a.m. Still in Chicago at 8 p.m.  #hateUnitedwithapassion


Not surprisingly, our original flight with its medley of mechanically-challenged aircraft was cancelled. But no! Now even the stand-by flight was delayed! After more than eight hours at O’Hare, we ultimately flew in coach middle seats 15 rows apart, watching the folks in First Class eat our dinner.

Of course, they’d taken our carry-on away from us since the overhead bins were full. Arriving in Boston after 11 p.m., it took a half hour to wring our bags out of them. Five hours and $265 at the airport Marriott later, we were back at Logan for our rebooked flight to Martha’s Vineyard.  Twenty-eight hours door to door.

So here’s our thoughts about United:

(1) Is it asking too much that you maintain your frigging airplanes?  Throughout the concourse during the day, we heard endless apologetic announcements regarding “brief” maintenance delays through gate agents’ lying skeevy teeth.

(2) #worstinvestmentever   Somewhere in United’s fine print should be a disclaimer that a First Class ticket is merely a pricey lottery ticket that may or may not result in First Class travel. If your flight is delayed or cancelled, you’ll fly stand-by in coach - if you even fly at all.


(3) Given (2), can we take our First Class United tickets as a charitable deduction?
(4) Explaining to customer service that you bought these pricey tickets for health reasons merely gets you an expression of “So die already.”
(5) Trying to sort this out after the fact is another exercise in futility. United’s customer service refund site has no “Bought First Class but flew coach” option. In fact, United is offended that you want a refund. After the UK fiasco and much haggling, United reluctantly parted with $300. (Airline math.) Current trip: unresolved.

(6) Would it kill you folks to reserve a couple of First Class seats for people who actually paid for them? United starts upgrading its premier coach passengers FIVE DAYS before a flight. Has First Class become strictly an upgrade class unavailable to civilians?

(7) Our advice if you need to fly First Class for health reasons? Stay home. 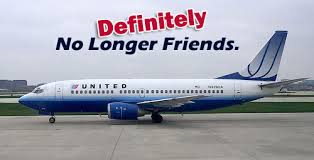 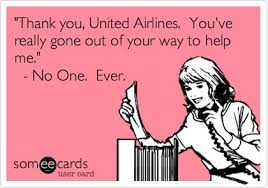 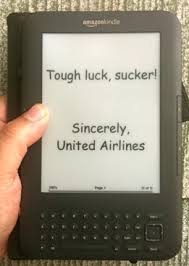 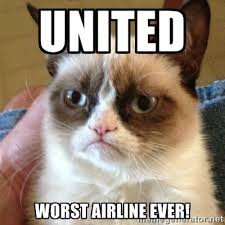